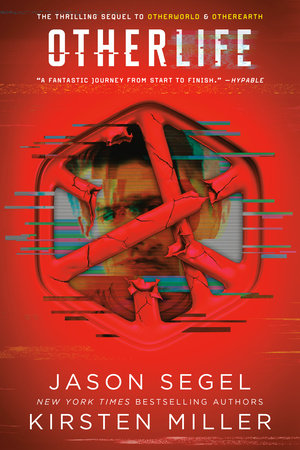 Simon, Kat, Busara, and Elvis are on the run with the tech super-villains at the Company hot on their heels. The new VR gaming experience created by the Company, OtherEarth, will change how the world experiences gaming. Paired with the hardware the Company developed, it has the potential to alter our reality forever.

The Company is on its way to becoming the world's newest superpower. And Simon is determined to shut them down forever. But to do that, he'll have to survive OtherLife--the next phase of gaming, and a complete reality reboot.
Read more
Read less
Read Excerpt
+ Add to My Bookshelf
+ Add to Goodreads

By Kirsten Miller
The Simulation

They say the water’s deep out there. The floor of the ocean plunges a few hundred feet from shore. There could be anything at the bottom, and we’d never suspect it. Waves lap peacefully against the rocks lying scattered across the beach. I watch the swells rise and fall. And I wait. At any moment, a beast no human’s ever encountered could rise from the depths, water cascading off its reptilian scales. The last thing I’d lay eyes on would be the sole of a giant, clawed foot coming down from above. The odds of a monster attack are slim, of course, but these days they’re definitely not zero.

“You’ve been watching too many of those OtherEarth ads, Simon,” says a voice beside me. “That crap can’t be good for your noodle.”

I don’t need to look over. I know who’s there. I can even picture the clothes he’s wearing. His outfit never changes. It’s always the same suit, accessorized with a fedora and a foul-­smelling cigarette.

I glance down at his checked pants. They’re made of a fabric that probably feels like a ziplock bag in this heat. “Don’t you own a pair of shorts?” I ask my dead grandfather.

“Sure.” He’s instantly wearing a pair of flamingo pink Bermudas. The rest of his outfit remains the same. His legs are bluish white and covered in thick, dark hair.

He takes off his fedora and fans his face with it. The sun reflects off the enormous nose that inspired the nickname they gave him—­the Kishka. I’ve never been able to figure out what he is. Ghost? Hallucination? Cerebral hemorrhage? Whatever the case, the graphics are awesome.

The Kishka rests his bony elbows on the balcony’s railing, and we both stare out at the sea. “Thinking about the other you?” he asks. “The one inside the simulation?”

Of course I am. He always knows what I’m thinking.

“I can’t stop wondering what’ll happen when they turn him off,” I say. “Do you think he’ll be scared?” I’d be terrified if I were in his shoes. He won’t even know how lucky he is that he doesn’t have to live through the things I have.

“I don’t know, son,” the Kishka says. “If you ask me, we should all be scared. None of this was meant to be. Humanity’s out in uncharted waters now. There’s no telling what kind of shit we’re gonna see.”

I hear footsteps on the wood behind me, and I turn to see Kat walking toward me across the deck. She’s wearing a simple sundress, her copper curls surrounding her head like a halo. I swear to God, I’ve never seen anyone so lovely. Sometimes it’s hard to believe she’s human. Towering over her is the magnificent mansion we’ve called home for the past month. Its ornate wooden bones are as white as a skeleton that’s been bleached by the sun.

The Kishka vanishes the instant Kat leans in to kiss me.

“Were you talking to your grandfather just now?” Kat asks softly, her lips still close to mine. That’s reason four thousand and two that I love her. She believes in things she’s unable to see.

Before I answer, though, I check the open windows of the house behind her to make sure no one is eavesdropping. “Yeah.”

“Any words of wisdom?”

“We’re all in deep shit,” I say, eliciting an exaggerated sigh of disappointment from my girlfriend.

“You know, Simon, I really expect a little more optimism from the One.”

I groan theatrically. Ages ago someone called me the One, and I haven’t heard the end of it yet. “Did you come here just to torture me?”

“No.” Kat grins mischievously. “I came to tell you that Busara’s out of the simulation.”

I stand up straight. “Just now?” I ask, and she nods. I wonder if that’s why the Kishka was here. I wonder if somehow, he knew.

Busara and Elvis are huddled together on one of the white sofas in our hostess’s grand colonial-­style living room. The fans that hang from the teak ceiling are circling, and everything seems to be moving in slow motion. I watch a fly do a halfhearted loop-­de-­loop. Even the insects get sluggish in this heat. Things are starting to get particularly hot on the sofa, so Kat clears her throat.

Elvis and Busara instantly scoot a few inches apart. I honestly don’t know why they bother. Everyone knows they’ve been together since the day they met. But now that Busara’s mother is here on the island, they’ve been acting skittish, like a couple at an eighth-­grade dance.

“Simon!” Busara cries out cheerfully when she sees me. She’s been in the simulation for over twenty-­four hours, and they do say absence makes the heart grow fonder, but her enthusiasm seems a bit much. She’s overcompensating for something.

“Yes, and the operation was a resounding success,” Busara informs me. “Wayne showed up. When he saw me there, he was mad as hell.”

Kat snickers. There’s no one she hates more than her step­father. “I bet.”

“So they don’t know what really happened to us?”

Along with the relief comes a nagging anxiety. There are so many questions I want to ask. But I’m not sure I want to hear the answers.

Busara’s watching me like she knows something. “Your face looks better,” she says.

There are mirrors everywhere in this place. I know what I look like. I preferred the bruises around my eyes when they were a lovely purple. Now they’re an unsettling green. “Thanks,” I respond.

“She’s just being polite. It’s not that much better,” Elvis says. “But you weren’t very good-­looking to begin with, so it really isn’t much of a loss.”

I love that Ukrainian head case. He gives me the truth, no ­matter how brutal. And that’s how I like it. I don’t need the facts polished or prettied up.

I glance over at the nearest mirror. A large white bandage covers my nose. Before the doctors could fix it, they had to break it again. One had the chutzpah to ask if I was interested in making a few improvements. I told her no, of course. Without the nose I was born with—­the glorious schnoz I inherited from the Kishka—­I wouldn’t even know who I am.

My nose will heal in time. I’m still not so sure about the rest of me. The Company had me for two whole days. There’s no telling what they’ve done.

I remember being at the Waldorf Astoria. I was there in flesh and blood. I experienced it all firsthand. I know what happened. But what came afterward makes me question every memory I have.

In my mind’s eye I can still see Kat standing over me. We’re in a suite inside one of New York’s most expensive hotels, and she’s just pulled me out of Otherworld. She shouts at me to get up, we have to get out. I can see the terror on her face. In the space of a second, I’m on my feet. Kat has me by the hand and she’s dragging me to the door. But it’s too late. Wayne and his men are already there.

Elvis and Busara aren’t in the room. I don’t know where they are, and I hope like hell they’ve managed to escape. Wayne sends two of his men down to the lobby to search for them. Then he rolls up his shirtsleeves and turns to me.

What followed is a blur. The next thing I remember is passing an old woman in the hallway of the hotel. She clapped a hand over her mouth and pressed her back to the wall when she caught sight of my face. I’m sure I was hideous. Wayne really knows how to throw a punch. And there wasn’t much chance he’d miss with his men holding my arms behind my back.

The Company men took us out through the hotel’s secret garage—­the one royalty and presidents use. I figured my hours were numbered. By the end of the day, my body would be found floating facedown in the harbor. My only thought was how to save Kat. But the Company had no intention of killing either of us—­at least, not right away. We had something they wanted to take from us first.

Kat and I were smuggled into the Company’s headquarters in a Manhattan skyscraper. There we were strapped down, and strange white helmets with no visors were placed on our heads. I don’t know how long mine was on. As soon as it began humming, my thoughts turned to static, and I lost all track of time.

It wasn’t until later that I found out what they did to us. The Company had extracted at least a month’s worth of memories from Kat and me. I doubt the tech in the helmets had been thoroughly tested. There’s no telling what the process did to my brain. I think it’s safe to say that the Company wouldn’t have minded much if the extraction had killed us. They were desperate to discover what Kat and I knew.

After we escaped, they tried to use the data they’d collected to determine what actions we might take next. So they ran a computer simulation using the memories they’d stolen. My skin still crawls just thinking about it. While my body lay there helplessly, the Company invaded my brain. Wayne now knows almost everything that happened to Kat and me between April and May. He saw our first kiss back at home in New Jersey. He was watching over us whenever we slept side by side. I hope he enjoyed the part where I shot him. That’s one memory I’ll never get tired of reliving.

But the Company didn’t see everything. With the help of Elvis and our current hostess, Busara was able to access the simulation, which had to run in real time. She took on her own double as an avatar. She didn’t change much in the simulation. Wayne needed to think everything was happening just as it had. Busara only made a few tiny tweaks to our story. But those tweaks ensured that, even with all the data they’ve stolen, there’s no way the Company can predict our next step.

Busara stands up and takes me by the arm. Elvis says nothing, but they’ve clearly discussed whatever Busara intends to do. She guides me outside to the same railing where I’ve been standing all day. I think they all assume that I’m soothed by the ocean. They don’t know I’ve been watching and waiting for the next attack.

Busara lets go of my arm and shoves her hands into the pockets of her linen jumpsuit. It’s a signal of sorts—­an alert that some straight talk is on the way. Like Elvis, Busara rarely minces words. I trust her now—­and I’ve almost forgiven her for getting me into this mess.