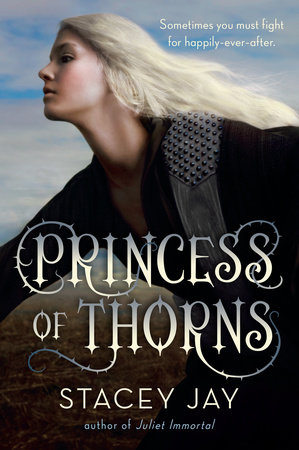 Game of Thrones meets the Grimm’s fairy tales in this twisted, fast-paced romantic fantasy-adventure about Sleeping Beauty’s daughter, a warrior princess who must fight to reclaim her throne.

It’s been ten years since Princess Aurora’s mother, the Sleeping Beauty, sacrificed her life to give her daughter her magical powers. Aurora knows that magic is never free. The price for hers is that she will never know romantic love.
Prince Niklaas is living on borrowed time. Unless he is able to convince a princess to marry him before his eighteenth birthday, he will meet the same terrible fate as his ten older brothers.
When Niklaas and Aurora meet under unusual circumstances, they must race to prevent the fulfillment of an ogre prophecy foretelling the end of human life. But will they be able to break their curses?

“Compelling and action-packed. . . . The combination of adventure; lovable, complex characters; and a touch of romance make this a book that teens will be drawn to, especially those who appreciate strong female protagonists.”—School Library Journal

“The plotting is impeccable, the world building ample, and the resolution neatly done without feeling pat.”—Booklist

“The banter between rakish Niklaas and feisty Aurora is crackling with chemistry and wit.”—The Bulletin

“Will appeal to fantasy lovers.”—VOYA

“Jay creates people with real flaws, but endows them with enough integrity to be characters to respect and want to know.”—examiner.com

Praise for Juliet Immortal
“The bones of the classic Beauty and the Beast story are all here, imaginatively fleshed out with tropes from science fiction, fantasy, even political drama. . . . Will please readers who like to believe that fairy tales can come true, even under dire circumstances.” —The Bulletin, Recommended

Praise for Of Beast and Beauty
“The romance is intense, and so is the horror in this strong reversal of the Romeo and Juliet story. . . . Teens will enjoy the macabre fantasy story of forbidden love.” —Booklist