For as long as the people of the valley can remember, the castle has stood at the top of the hill, surrounded by thorns. Within it, they all know, lies the sleeping princess, waiting for her prince. A story of romance, passion, magic...and of unending annoyance to Alesa, the youngest daughter of a family with too many daughters. It's also a story that's almost completely wrong. 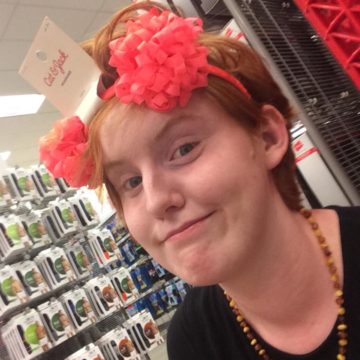 Once, long ago, there was a beautiful king and a compassionate queen who ruled their domain from a castle on top of a hill. They were beloved by all their people, for the king’s beauty graced his domain with the love of beauty, and the queen’s compassion was famed—no person whom she met wanted for anything, and she took care to meet a very great many people.

When the queen bore a child, the whole kingdom rejoiced—doubly so, for the child was a girl, that most blessed of creatures. The girl was beautiful to look upon, even as an infant: all who saw her wished to love her. Her cries were like songs, and her smiles like sunbeams. People came from near and far to meet the baby princess, including the king of a neighboring kingdom. This king was a widower, and he brought with him his son, Phillip. The two families had long hoped to unite their kingdoms, and in this moment, they saw their chance. The two were betrothed, set to be wed.

A great feast was thrown to commemorate the occasion of the betrothal between the child Phillip and the infant Aurora, attended by men and women and even the Fae folk, those elusive people of the wood.

Yet in the midst of this joyous occasion, tragedy struck. The mighty sorceress Malifa appeared, dark as a raven and bearing her staff. Some say she was angry at not being invited—some say she bore a grudge for lost love, of the king or the queen or both together. For whatever reason, angry she was, and a curse she pronounced.

“Listen well,” she said, “for I shall speak but once. This princess shall grow fair and loved, but love her well for time is not thine ally. Upon her sixteenth birthday shall her days end, for she shall fall into a deep and dreamless sleep, never to awake before she die.”

With that, Malifa disappeared, leaving behind her anger and lamentation mixed. The beautiful king and the compassionate queen sought the help of their own mages, but none could find the magic the sorceress had used, and therefore turn it back. In desperation, the king and queen sought the help of their Faerie guests, hoping they might seek out aid through the quandaries of trickery the Fae folk love best.

It pleased the Fae to help, and so one of their number pronounced a blessing: not in death would the sleep end, but in rest, until love’s true kiss would come to rouse her.

And so the young princess Aurora grew, loved by all who knew her, and fair indeed. Yet as the child grew, she learned more of this dreadful curse that hung over her head, and as her parents before her, she was angry. They say she sought a way to turn her fate aside. Perhaps she even visited the Fae herself, seeking an answer. Who can say?

Yet on her sixteenth birthday to sleep the princess did fall. The king and the queen laid her to rest in the highest tower and sent for Prince Phillip, hoping he might prove able to defeat the curse.

It was not to be—for Prince Phillip arrived too late. Malifa, having been carried news of the Faerie blessing, cast a spell to raise up a thick forest of thorns between the castle and the rest of the world. Only by good fortune did the people of the castle escape, and the compassionate queen did not. They say she could not bear to leave her only daughter’s side.

Prince Phillip tried to fight his way through the thorns, but had no success. Many have tried since, but it is feared impossible. Time passed, and the king wasted away to nothing, leaving behind his kingdom to be ruled by the man who he had once hoped to make a son. Leaving behind the castle, surrounded by thorns, in which his daughter still sleeps.

“It doesn’t seem very fair, does it?”

A sigh. Papa pinched the top of his nose, squinting at his smallest daughter who sat perched on the edge of the table, legs swinging erratically. She’d been kicking her older sister in the shoulder until the girl had moved, but she’d hardly seemed to notice. “What’s not fair, Alesa?” Papa asked, as patiently as he could.

“Why’d she hafta go to sleep for?” the little girl asked, whisking blonde hair from her face with one grubby hand, wrinkling her nose. “She shoulda fought the sorceress instead. Mebbe then the curse woulda been gone.”

“She couldn’t fight the sorceress, idiot,” another older sister scoffed, adjusting herself primly on a chair. “She didn’t know magic.”

“But why she gotta—”

“I don’t know, Alesa,” Papa interrupted further questions he didn’t have the answers to, shaking his head. His youngest daughter was a mystery to him, an enigma of questions he found exhausting after the easy mundanity of his older six daughters. He sometimes thought the saints had heard his prayers for a son and accidentally gotten their signals crossed—in a boy, the girl’s propensity to question everything and ruin every pair of clothes she wore might have been seen as a sign of good fortune. In a little girl, it just meant extra work and worry.

“Shut up,” the older girl said, reaching over to pinch Alesa’s elbow.

Papa had to intervene, dragging the younger girl off her older sister, once again ruing the day he’d ever opened his big mouth to question the saints and their wisdom.