The Elf, The Dwarf, and The Minotaur 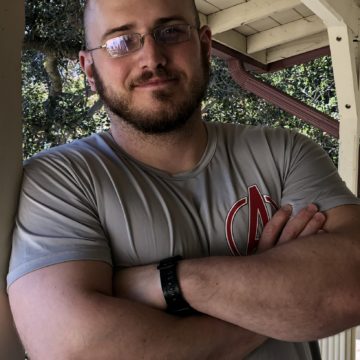 Natia barely had time to dress and grab her bag before rushing out on to the rain soaked deck of the Wayward Breeze. She had been thrown from her bed just minutes before by the violent heaving of the ocean. The young elf had hoped for a smooth voyage but clearly it was not meant to be. On deck she found the crew frantically trying to tie down anything that wasn’t already tied down. She braced herself in the door frame as the ship was struck by another wave.

The Breeze was a small but sturdy iron clad steamship. It could easily weather most storms but this one was threatening to tear it asunder. Giant waves ceaselessly battered the hull and soaked the deck. The rain was so cold that every drop felt like a needle pressed against the skin. In response to the downpour Natias short jacket transformed into a more suitable raincoat. Expensive as they were enchanted clothes had their benefits.

The howling wind forced Natias elongated ears back against the sides of her head. She looked around and found that she could see nothing beyond the dim glow of the ships lamps. Only the occasional flash of lightning illuminated the turbulent waters. In her eighteen years she had never seen a storm of such power.

“Get back down below!” Captain Galius Krakk bellowed, “This is no place for a passenger.”

“Will I be better off bellow deck if the ship sinks?!” Natia called back.

Galius snorted as he plodded toward her. “I’m not letting this ship sink. Everything I own is invested in this tub, if it goes down I’ll lose my crew and my livelihood though tragically not my life.”

Natia almost laughed at that. As a Marfwal Galius was an amphibious hybrid of dwarves and merfolk, not as agile a swimmer as the latter but still a creature of the sea. Even if the Breeze was swallowed by the depths he had little to fear from the waters.

“I may be able to help you!” Natia shouted over the howling wind.

“Unless you can can calm the heavens you’re better off below deck!” Galius reiterated.

That took Galius by surprise. He was about to speak when the ship rocked violently once. “I’ll believe it when I see it but I’m willing to give anything a try at this point!” Galius said as he steadied himself.

“I’ll need a space cleared on deck, five feet by five feet should be sufficient!” Natia called out.

Galius raised the spiked ridges of his face that took the place of eyebrows, “That’s very precise…”

“All magic must be.” Natia replied pulling a heavy tome from her bag.

Galius did not hesitate further, he waved over a couple of human deck hands. “Secure a space on the deck, five by five minimum!” Galius barked.

As Natia watched the deck hands scramble away she found herself hoping that she could deliver on her promise.

Before long Natia had her space. The Wayward Breeze was primarily a cargo ship and currently an overloaded one. A space on deck where she would not need to fear being crushed by a stray crate was hard to come by but the deck hands had done an admirable job securing one for her. She could hear the ropes securing the heavy cargo straining but Natia had confidence in the crews abilities. It was her own that she doubted.

She hadn’t told Galius that the impressive looking book that now lay open before her was a textbook. ‘An Inroduction to Magecraft’ was a powerful textbook to be sure but one that was as far from an actual grimoire as she was from being a full fledged mage. Still the spells contained within this book and her skills would have to be sufficient. There was nothing to be lost by trying. Except a shipfull of souls including her own that is.

Natia carefully withdrew a piece of chalk from her bag and as the book instructed carefully drew a sun shaped diagram on the deck.

She took a moment to admire her work and found it exquisite. Natia from an early age had been a talented student of the magic arts. It was this talent that had earned her acceptance to the prestigious Pythoragan magic academy in the great Imperial capitol of Ryleh. If she could save the Breeze and herself now she would be certain that she was worthy of this honor.

Removing three carved gems from her bag Natia placed them at precise points on the diagram. She then knelt in the center between the stones and began to chant. Natia did not know the exact translation of the words that now flowed from her lips. The language was old and full comprehension would take years of study. All that mattered now was that she knew their intended effects, if she pronounced every word correctly the sky would clear, if not then perhaps it would fall on her head.

Light began to flow from the stones along the lines of the diagram. Natia felt a tingle pass through her body. It was not an unfamiliar sensation, the words she spoke were filling her with power, enough power to control nature itself. She had to remain calm, all it would take to fail was the mispronounciation of a single syllable.

The fierce wind tore the hood of Natias raincoat from her head. Even as she felt the freezing rain on her skin once more she continued chanting. Her long curved horns were now emitting a dim glow, a side effect of the magic now coursing through her body.

“How long is it going to take?!” Galius shouted from somewhere nearby. Natia almost called back but instead continued chanting. That could have been bad. She understood his urgency however, the ship was rocking more violently now, the waves hurling it about as if it were a toy.

The diagram on the deck was now glowing almost as brightly as the sun it represented. Bathed in its warm light Natia concluded her chant. She bit down on her thumb, just hard enough to draw blood. All magic came from gods and demons and they gave nothing for free. She hoped that a few drops of her blood would be enough to barter for the safe passage of a small cargo ship.

Natia allowed her blood to drip onto the diagram. As soon as they struck the deck the glow of the diagram spread beyond it to the rest of the ship and finally into the churning waters around it. It lasted no more than a second.

Preparation took time, Natia knew, but the effects of such spells were often instantaneous. The waters grew calm, the wind no longer howled, and the sky began to clear. Natia looked up at the fading stars, then to the horizon in the east where the first rays of the sun could be seen. It was a most welcome sight. Natia breathed a sigh of relief.

She reached into her bag and pulled out a towel. Unlike most of the items in Natias bag or for that matter the bag itself the towel had no enchantment placed on it. It was however made out of a very absorbent material. With it Natia was quickly able to dry her curly black hair.

As she rose Natias raincoat transformed back into the stylish waist length jacket she preferred. Her adaptive clothing had remained dry through the storm and had kept most of her the same way. She was glad her parents hadn’t wasted their money.

Natia gathered up the gems from the deck and used the now soaking wet towel to erase what was left of the diagram from the deck. As fine a work of art as it was she guessed Galius wouldn’t appreciate her leaving any doodles on his deck. After making sure that she hadn’t forgotten anything Natia slung her bag over her shoulder and headed off to enjoy the sunrise.

The crew of the Wayward Breeze were far too busy cleaning the deck to take notice of the ocean behind their ship. If any one of them had taken a look back they would have seen a giant whirlpool forming in their wake. In the depths a giant was awakening, and it was hungry.