Golden girl Sophie gets her first ever tattoo. 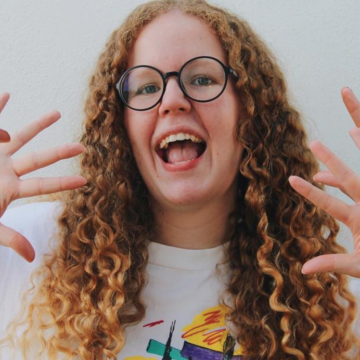 “If I could describe Sophie in one word it would be,” Lily pauses, as if it’s a great difficulty to describe what makes her friend so amazing, “Selfless.” She finally finishes.

The video cuts to another one of Sophie’s friends, Brandon, sharing one of his favorite memories with her. Sophie sits squished between two of her friends, as she watches the birthday video her friend Vanessa made for her. The video closes with all of her friends shouting “Happy Birthday Sophie!” at the camera. Sophie sets down her plate that previously held blue velvet birthday cake and stands to thank her friends.

“Y’all are seriously the most amazing friends a girl could ever ask for.” She says, bringing all four of them in for a group hug. “And I have a little bit of a surprise for y’all.” Sophie says, barely able to contain her giggles. Before any of her friends can question what she means, Sophie pulls up her shirt to reveal a tiny sunflower tattoo right above her left hip bone. The group explodes into delighted and shocked noises, all marveling at the black and white flower.

“Who would have thought perfect little Sophie would be the first of our friends to get a tattoo.” Says Adrian approvingly.

“This girl from work, Bella, does them in her garage. She gave it to me for free for my birthday. Isn’t that so sweet?” Sophie asks, looking down at the tattoo herself as if trying to memorize it.

Brandon’s eyes narrows, “It hasn’t gotten infected or anything?”

Sophie laughs nonchalantly, “Nope! Not yet.” The group erupts into more giggles and continues fawning over Sophie’s tattoo.

Sophie wakes the next morning and immediately looks at her tattoo, as if checking to make sure it’s still there. She runs her finger over it and notices a petal is missing from it. Instead of being on the flower, it’s next to the stem as if it’s floating to the non-existent ground of Sophie’s hip bone. Sophie squints and runs to the bathroom. She examines the tattoo in the mirror. After contemplating for some time, Sophie decides she must have missed that detail the first few times she looked at it. It was pretty dark in that garage. And at her birthday party. Sophie shakes it off – she’s scheduled to volunteer at the youth center before school and she’s already running late.

Sophie comes home that night and doesn’t even have the energy to eat dinner. She’s had such a long day she’s developed a massive headache. Sophie touches her forehead on the way up to her room and decides she’s possibly developed a fever as well. Luckily, tomorrow is Saturday and aside from a shift at work in the evening she doesn’t have anything going on. Sophie takes some ibuprofen and lays an ice pack across her forehead before trying to go to sleep.

Sophie awakes to even worse pain and a churning stomach. She runs to the bathroom and finds herself bent over the toilet, vomiting her guts out. When Sophie stands back up, her shirt has ridden up and she notices the sunflower has lost two more leaves. This time they’ve all piled up next to the sunflower as if on the ground.

She doesn’t know how she knows but she does. That stupid sunflower tattoo is what’s causing her to feel like death. Sophie grabs her phone and glances at the time, it’s not even midnight yet. Bella will definitely still be up. Sophie runs out of her house, quietly as to not wake her parents, and drives the ten minutes to Bella’s house.

“This tattoo is haunted.”

“Um, what.” Bella says, stepping out of her house and closing the door behind her. Sophie crosses her arms in an attempt to look threatening but really just looks more like a mildly upset mother.

“Don’t ‘Um What’ me. You’re the one who gave me this sketchy ass tattoo. Now admit it’s haunted.” Sophie sits down on the porch, a sudden wave of dizziness hitting her.

“You’re crazy. Get off my porch.” Bella says, but Sophie’s not falling for it. She turns around and gives her the mildly upset mother stare again. Something about it strikes a cord in Bella, because she sits down next to Sophie.

“Okay, it’s not that it’s haunted per say it’s more like it’s…possessed.”

Sophie hits Bella on the arm, “What the hell Bella?”

“Look, I can’t get into it, but it was the only to save my life. I can’t die right now, I have to be here for my little brother.”

“So you’re saying there’s a demon in this tattoo and it’s killing me and there’s nothing I can do about it?”

“Yes, but there is something you can do about it.” Bella says, her voice trailing off.

Sophie looks at her expectantly, already making a plan in her head. Step one: call a priest. Step two: apologize to her older sister for never believing in demons.

“Tattoo someone else. Pass it on to them.”

“So basically you want me to murder someone?” Sophie asks, offended for reasons that should be obvious. Bella just shrugs.

Sophie sits there in silence, chewing on her lip. She never thought she’d have to murder someone, but this was pretty remote, she wouldn’t have to see the person actually die. Maybe she could find someone who deserves it, Dexter style.

“Okay.” Sophie says, her face unrevealing of any emotion, “Show me how.”