The Queen of Stars

Indigo had all the admiration in the kingdom. Perks of being the star queen’s sister, everyone said. But secretly she was admired.

Star, her sister, who had founded this kingdom, had no parents. They had left after Indigo was born. Star hadn’t seen them. Never in all the 16 years she had lived with her parents before they deserted her and her baby sister.

But she didn’t care anymore.

She had managed to find a family in all these years. She had raised Indigo, knowing that she will give the throne to Indigo one day. She knew Indigo wouldn’t reject.

Indigo was a happy, cheerful girl, who never agreed with her sister’s wish to make her queen.

Star never paid attention to Indigo’s foulness to decline the throne of the kingdom of stars. Indigo would get it someday.

And they led a happy life.

Indigo was a bubble of unlimited curiosities and questions. She used to wonder where her parents were, or why they left. Star despised her past life, and that was obvious.

Indigo despised manners, and that was obvious too.

Everything the royals wanted to tell seemed obvious, but anything they wanted to keep hidden would never be known.

Star put on a white-velvet gown, never stopping to admire her reflection in the mirror that took up her left-side wall. “Take that useless mirror away from my room and give it to someone who needs it.”

A whirlwind that was also her sister Indigo flew by into the room. “Put it in my room!”

Star glared at her. “Is that how you think princesses act?”

“Indigo! If it weren’t for this realm, you wouldn’t have ever lived. Learn to appreciate my work.” Star didn’t look at Indigo this time. “Now, off to work we go.”

“We could’ve moved to the realm of the Moon. At least then you would not pester me for a silly throne.”

Star said nothing and ignored her.

Indigo rolled her eyes. “Ignore me all you like.”

“Why are you so obsessed with the Moon? You know I hate the queen.”

Indigo was stubborn by nature, everyone knew. She wanted everything she asked for.

And she was completely obsessed with the moon. Even she didn’t know why.

Ever since the stars were born, their realm had hated the Moon. But it seemed so awesome. So magical. So colorful. She didn’t know what was wrong with her sister and the other stars. (Everyone here was called as a ‘star’)

Star had so much to handle: a kingdom, and a 12-year-old sister who was stubborn like a cranky toddler. Sure, she enjoyed being queen, but handling a kingdom herself was hard (and her sister was no help). She was sick with the moon. Everyone’s obsession with either bringing it down or its beauty and awesomeness was killing her.

Star was the age of a princess, not a queen. It unsettled her.

It was never told by her, or anyone, that she wanted someone. Her parents. Her family. She wasn’t as much bothered as she was in the beginning, but it still broke her heart.

Star everyday shook away her thoughts and would always smile trying to encourage herself that today will be great. She did it today, too.

Star took her place on the throne. Today was Star Realm Day. It was celebrated grandly, with a party. Star could never enjoy it. Because she was queen. She was to remain solemn at all costs. Her day started out with complaints. Lots and lots of complaints. One reason Star didn’t or couldn’t enjoy the day.

The people had oh, so many complaints. Even though the town had every beauty imaginable. One side the moon was visible, while the other side, endless space. Crystal Towers, seas made entirely of starlight, prosperous houses, and the castle. Starlight was infused in the eyes of a weakling, to enliven. What complaint could people actually have?

Sometimes they complained about less starlight, about the crumbling Crystal Tower, or about the views. Minor complaints, made just to waste Star’s time and energy.

She had to enjoy. Star couldn’t let her feelings stifle inside for too long.

And adventure, a life of happiness and bravery.

She never got it. Instead, she was a princess. Of the Stars. It was an important role, and she had to keep it maintained.

“Little princess,” the handmaiden cooed. “I will give you adventure.” Her voice changed to a hiss. “And death.”

Indigo whirled around with a rush. “What–?”

The handmaiden patted her hair. “Now, I have to prepare for the festival tonight. You won’t like my preparation very much, though.” 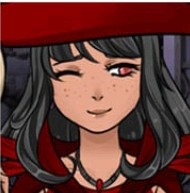 A Story From Two Perspectives

A Story From Two Perspectives