"Dove Day" is a short story about two sisters, Mara and Sydney, in the days leading up to Mara's departure from their childhood home. It's an exploration of sisterhood, memory, and loss told through five vignettes, beginning nine days from Mara's Dove Day. 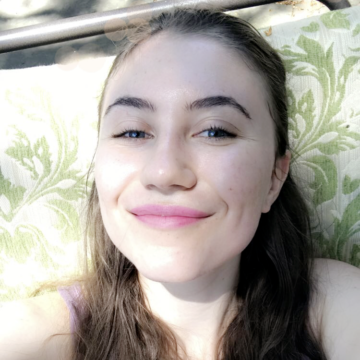 Mara will be leaving soon. In nine days, to be precise.

I go to the grocery store with her today, but all we buy is milk and celery. The former is for Mara, because she started drinking milk on Mom’s orders and never stopped, and the latter is for me. I’ve always liked raw vegetables, but when I was a kid, I ate them so often that Mara started calling me Peter. Actually, she and Ian still call me Peter more often than Sydney. It’s a weird nickname that never fails to confuse people, but no one wants to change it.

After we check out at the grocery store, we end up going to get ice cream, even though it’s not even noon yet. Mara has been doing this sort of thing a lot lately–– taking me on spontaneous trips to our old haunts. Ice cream parlors, parks, movie theaters, the pond where we used to catch salamanders. I know she’s doing it because she enjoys my company, but I also know she feels sort of guilty about leaving. I’m just starting my senior year of high school, and she’s told me more than once that she wishes she could be at home with me for that. But it’s not her fault, of course–– Dove Day is important, and it’s not something that you can just reschedule.

Ian is still a little young to understand why Mara’s moving on, and he’s only ten. So his Dove Day isn’t for ages. As I step into Johnny’s Ice Cream Parlor, I feel a brief twinge of guilt about leaving him out of this. But I also know that I’ll miss Mara terribly, so I want to spend time with her while she’s still at home. We walk to our favorite booth at the far end of the restaurant and slide comfortably into the cracking red leather seats. We’ve spent so many nights here together that it feels like a second home.

I raise one eyebrow. Mara only begins a conversation awkwardly like this when she knows I won’t like it. Filler words indicate hesitancy, which tells me that she is up to something. “What is it, Mara?” I ask impatiently. She makes a halfhearted attempt to look innocent.

“Nothing! I was just going to ask how your day was!”

Mara’s response is slightly higher in pitch than usual, but other than that it’s quite hard to tell that she’s lying. Hard for anyone else but me, at least. Instead of looking nervous when she tells a lie, Mara’s face goes sort of slack. She looks too relaxed to be my real sister, but obviously, not everyone else knows her like I do.     “Okay, I definitely don’t believe you,” I tell her.

“Fine,” Mara sighs. She twirls a strand of her brown hair. “I was wondering if you ever talked to that girl–– Natalie something.”

“You mean Annabelle?” I ask, my voice turning slightly sharp. I intentionally soften it. “Uh, no. I never got up the nerve.” Mara frowns and tilts her head disapprovingly.

“Come on, Peter! You can do better than that!

I feel a preemptive pang of nostalgia for her intensity of being, her self-assuredness. She doesn’t spend all her time questioning her actions like I do, and without her, I wonder who my counterweight will be. I realize I’ve been silent a beat too long. “Yeah, I probably can. But I just don’t know if I want something else to think about ri—”

“No. You’re not doing this again. You always do this when you care about something and you’re scared. You can’t use my Dove Day as an excuse.”

I roll my eyes even as I realize she’s right, but I don’t resent this fact like I normally would. Mara continues her plea without any response from me.

“C’mon, Peter. Just talk to her before the 13th. It’ll give me something to think about other than leaving.”

I’m struck, then, by how young she is. Dove Day feels like a big leap for anyone, but it’s especially early for Mara–– she turned 19 in the spring. Mara is less than two years older than me, but usually it feels like more than that. Usually I don’t see so much of myself in her. I sigh and know that I’m agreeing to do something I will surely regret as soon as I finish doing it. “Okay, I’ll talk to her. I’ll embarrass myself because you’re bored.”

“Don’t be so dramatic. And don’t think about lying to me–– I can always tell.”

This is not strictly true, but she believes it because she rarely suspects that I’m lying at all. But I know I’ll have to follow through on my promise this time. “Yeah, okay, I know. We’ve been over this. I’ll let you know what happens after school on Monday. Can we order now?” Mara’s face slides into a slightly mysterious smile. I let it go. Nine days.