This is a story, of stories. told time and again, becoming twisted and untrue. I just added more untruth to the mix. 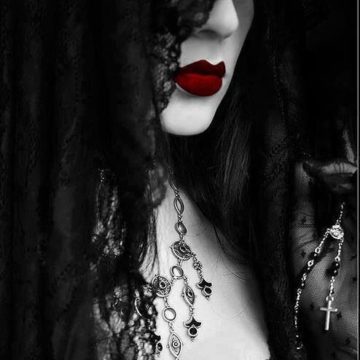 Once Upon A Time. Floating. In an endless abyss of blackness filled with nothing but millions of shards. Some glittering, some shining, some clear, and some reflecting all that they see. But other than this, there is nothing here. Then the multitude of shards begin gathering together, creating something. At first, the pace is slow, then slowly becomes more rapid. A structure begins emerging, and brightening, showing memories of a place from long ago. A Kingdom. It becomes so massive that it becomes a perfect copy of reality.

I sit here on this throne of light, bright, but yet colder than stone.

I sigh. Just sitting here on my throne. Waiting, patiently. For something, anything to happen.

“Nothing is exciting that happens in the kingdom anymore,” I say, as I shift a few locks of my golden hair behind my head, straighten out my silky, golden dress and adjust my crown.

The door to the throne room opens as soon as I do this.

A man walks in, covered in blood, and drying mud, slouching from the weight of the many chains he wears, held by many guards that surround him.

“What is the meaning of this?” I say loud enough for the words to echo all around the throne room.

My squire comes in and walks up to me.

He bows before addressing me. “Your majesty, this is the one on which is accused of sewing chaos through your kingdom, saying that you are a tyrant, a malicious leader, in it only for your own gain, and,” he hesitates before saying. “Must I say it? Well, he was also spouting insults about your array.”

I turn my head towards the accused man. The guards force him to kneel at blade point.

I stand up and start walking towards him, the mix of earthy and unholy smells from dirt and body odour emanate off of him like an aura. He gives me a nasty glare, while the guards begin trembling in fear of my presence.

As I walk up to him, I say calmly. “What is your name, blasphemer?” My voice still resonating off the walls.

“Well, not anymore,” I add, still circling him.

I stop in front of him. “I understand you lost your daughter to an accident.”

He looks up at me with rage, trying to get up but being held back by the guards and chains.

I grab his chin, forcing him to look straight at me. “What if I told you, I could bring her back?”

He looks at me with glint of sorrow in his eyes, that quickly fade into disbelief. “You can’t do that, she’s gone. Not even you can reverse death!”

I walk halfway back to my throne. “The question is, what can you do for me?” I say, stopping and looking back at him.

He looks around, sorting out his options. None.

I sit down on my throne. “There is a girl, a potential threat to the kingdom, fled just beyond the castle walls, if you retrieve her for me…” I hold out a hand in front of me, and a bright light comes forth. When it vanishes, a little girl with brown hair steps up to the man. “Daddy!” She says.

She then fades away, into a golden dust. “…I will give back to you what was lost”

He gasps before the guards force him up and then out the door, after my prize.

The structure shatters after she says this, and then regroups, forming a new scene.

Running, Passing tree after tree. Running through this endless forest. sometimes tripping over uneven ground Replaying what happened in my mind;

The woman jumped in front of me, blocking a beam of light with her sword. She turns around. And shouts at me. “Go! Run! Now! Get as far away from here as you can! Find The Enchantman, In the far West! Go! GO!”

She blocks multiple blade swipes as I began running out the nearest door.

The sounds of clashing steel still ringing, even now in my mind, as I run through the forest to the West, the sun is almost down and the cold is setting in. The howls of wolves, wild dogs, and other creatures can be heard from multiple distances.

“I must keep going, the farther I go, the quicker I will reach the West.” I say between breaths.

I hear the sound of a man in the distance. “Hello! Hello out there!” His silhouette waves at me from afar.

I stop And shout back at him. “Hello!”

“I apologise if I am trespassing Sir, I’m just trying to reach the far West.” I tell him.

“I see, well, You aren’t gonna get that far.” The man pulls up a rifle and fires. A cloud expands in the small area, filling the air with the smell of gunpowder. The man quickly struggles to reload. A misfire.

I quickly grasp at the notion that I was still alive, and resume running through the forest again as the man curses and runs after me, throwing his rifle on the ground, indicating that it jammed in his hurry.

My legs begin slowing down, I can’t keep the pace. I try losing him around the trees, but he still keeps getting closer.

I turn around to see how far the distance is between us. I freeze in terror as I see him flying through the air, The glistening knife above his head, The gap quickly closing between us. I feel my eyes widen as I draw my breath once more.

The structure Shatters once again into oblivion. – No longer.

My favorite part of this piece is playing The Queen, when she acts as if she’s the bee’s knees and messing around with the Huntsman, because I know that I couldn’t have actually done that in real life, otherwise I’d probably die.

I think that the end could still use some work, I just needed to finish it a little quicker than I thought