Find the Perfect Bag for Your Book

Do you decide to buy a bag only if it’s the perfect size to fit all your essentials, including the book you’re reading?

We see you, smart shopper, and this list is for you! If you’re the type of reader who just can’t leave your book at home, check out this guide to buying the perfect bag to fit your favorite books (and all that other less important stuff too).

This cross-body bag is the perfect combination of trendy and practical for when you’re on the go. The subtle floral pattern makes it a great choice for spring in summer. Plus, it’s the perfect size to slip in a paperback. Might we suggest Finding Audrey by Sophie Kinsella, author of the Shopaholic series? This book-bag combination is definitely shopaholic approved.

Audrey wears dark glasses all the time, even in the house. She almost never goes out, doesn’t talk to new people, and finds making eye contact to be nearly impossible.

But then one day she meets Linus. Linus is her brother’s friend and a sensitive spirit with whom she can talk through her fears. He makes her laugh and doesn’t leave her feeling like she’s being judged. As their friendship deepens, Audrey’s recovery gains momentum, and she and Linus begin to develop feelings for each other. But how can they have a future together when Audrey hasn’t dealt with her past? And how could anyone ever love her once they’ve seen her at her worst?

Everything in H&M’s Conscious Collection is eco-friendly and made with sustainable materials. This 100% cotton checklist print tote has a tiny carbon footprint. It’s also featherweight, but sturdy. There’s even room for Nicola Yoon’s second novel, The Sun Is Also a Star. Her novels are like the tote: poetic, romantic, and genuine.

Natasha: I’m a girl who believes in science and facts. Not fate. Not destiny. Or dreams that will never come true. I’m definitely not the kind of girl who meets a cute boy on a crowded New York City street and falls in love with him. Not when my family is twelve hours away from being deported to Jamaica. Falling in love with him won’t be my story.

Daniel: I’ve always been the good son, the good student, living up to my parents’ high expectations. Never the poet. Or the dreamer. But when I see her, I forget about all that. Something about Natasha makes me think that fate has something much more extraordinary in store—for both of us.

The Universe: Every moment in our lives has brought us to this single moment. A million futures lie before us. Which one will come true?

When you need to step it up a notch, grab Icing’s black snakeskin handbag. It’s part of the Icing X Justine Skye summer collab. Structured yet roomy, we suggest pairing it with Now I Rise by Kiersten White. Lada Dracul is elegant and slightly wicked-looking . . . just like this bag.

Lada Dracul has no allies. No throne. All she has is what she’s always had: herself. Filled with a white-hot rage, she storms the countryside with her men, accompanied by her childhood friend Bogdan, terrorizing the land. But brute force isn’t getting Lada what she wants. And thinking of Mehmed brings little comfort to her thorny heart. She left him before he could leave her.

What Lada needs is her younger brother Radu’s subtlety and skill. But Mehmed has sent him to Constantinople—and it’s no diplomatic mission. Torn between loyalties to faith, to the Ottomans, and to Mehmed, he knows he owes Lada nothing. If she dies, he could never forgive himself—but if he fails in Constantinople, will Mehmed ever forgive him?

As nations fall around them, the Dracul siblings must decide: what will they sacrifice to fulfill their destinies? Empires will topple, thrones will be won . . . and souls will be lost.

Ready for the gym, yoga class, or an outdoor quest, Quilted Koala’s sturdy and on-trend small duffel in gray camouflage with a side pocket can carry all your gear. Make space for James Dashner’s Game of Lives. Pull it out when you’ve got some downtime and get caught up in an adventure that won’t make you break out in a sweat.

Michael used to live to game, but now, the games are over. The VirtNet has become a world of deadly consequences, and cyber terrorist Kaine grows stronger by the day. The Mortality Doctrine—Kaine’s master plan—has nearly been realized, and little by little the line separating the virtual from the real is blurring. If Kaine succeeds, it will mean worldwide cyber domination. And it looks like Michael and his friends are the only ones who can put the monster back in the box—if Michael can figure out who his friends really are.

The Star Mela Lexi tote is a summery delight with its golden star print. It’s great for everyday use or as an overnight bag. Add Cath Crowley’s Words in Deep Blue to keep you company on your daily commute or weekend trip. Crowley’s own travels have inspired her books.

Years ago, Rachel had a crush on Henry Jones. The day before she moved away, she tucked a love letter into his favorite book in his family’s bookshop. She waited. But Henry never came.

Now Rachel has returned to the city—and to the bookshop—to work alongside the boy she’d rather not see, if at all possible, for the rest of her life. But Rachel needs the distraction. Her brother drowned months ago, and she can’t feel anything anymore.

As Henry and Rachel work side by side—surrounded by books, watching love stories unfold, exchanging letters between the pages—they find hope in each other. Because life may be uncontrollable, even unbearable sometimes. But it’s possible that words, and love, and second chances are enough.

There's something inspiring about an upcycled bag, especially one made out of an old firefighter's coat. We think E. Lockhart’s, Genuine Fraud, is a great match. Pair up something sturdy (recycled bag) with something that will keep you up at night (We Were Liars)—because every life needs balance.

We Were Liars Deluxe Edition

A beautiful and distinguished family.
A private island.
A brilliant, damaged girl; a passionate, political boy.
A group of four friends—the Liars—whose friendship turns destructive.
A revolution. An accident. A secret.
Lies upon lies.
True love.
The truth.

The Herschel Supply Dawson backpack is great for anyone who has an action-packed day. Its two huge outer pockets and roomy interior have space for everything. You could add both books that make up The Illuminae Files series by Amie Kaufman and Jay Kristoff and still have room for stuff. And unlike Kady and Ezra, you won’t have to worry about breaking up while an alien invasion is raging over your head.

Kady thought breaking up with Ezra was the worst thing she’d ever been through. That was before her planet was invaded. Now, with enemy fire raining down on them, Kady and Ezra are forced to fight their way onto one of the evacuating craft, with an enemy warship in hot pursuit.

But the warship could be the least of their problems. A deadly plague has broken out and is mutating, with terrifying results; the fleet’s AI, which should be protecting them, may actually be their biggest threat; and nobody in charge will say what’s really going on. As Kady plunges into a web of data hacking to get to the truth, it’s clear only one person can help her bring it all to light: Ezra.

Told through a fascinating dossier of hacked documents—including emails, schematics, military files, IMs, medical reports, interviews, and more—Illuminae is the first book in a heart-stopping, high-octane trilogy about lives interrupted, the price of truth, and the courage of everyday heroes.

Show us your go-to book bag by tagging us @GetUnderlined on social. 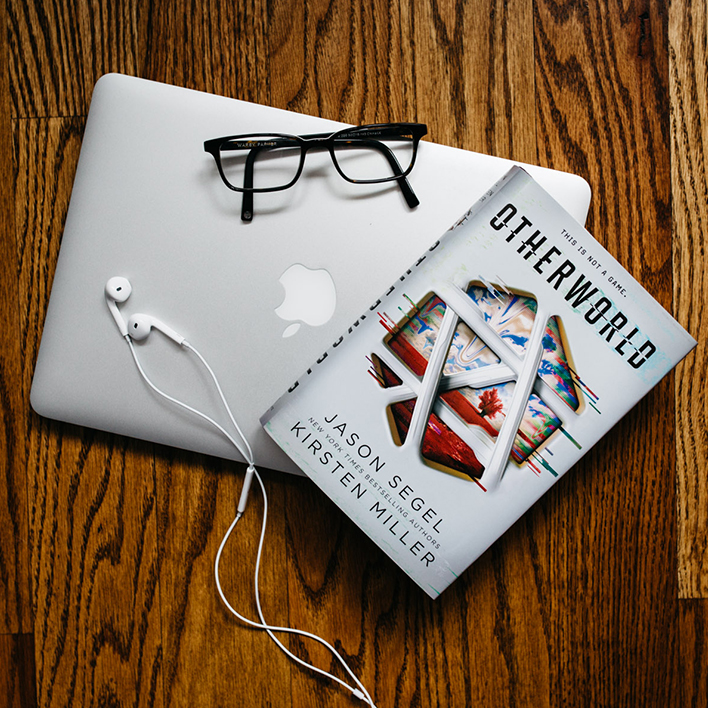