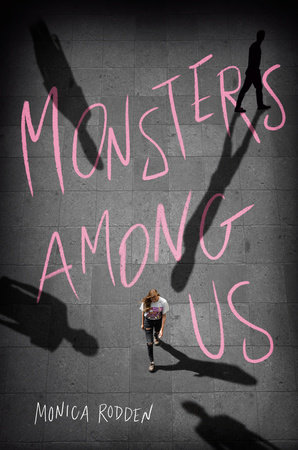 By Monica Rodden
Fans of Sadie and You will be riveted by this compulsively readable new thriller about a survivor of dating violence who uses her newfound awareness of everyday evil to hunt for a killer.

When Catherine Ellers returns home after her first semester at college, she is seeking refuge from a night she can barely piece together, dreads remembering, and refuses to talk about. She tries to get back to normal, but just days later the murder of someone close to her tears away any illusion of safety.

Catherine feels driven to face both violent events head on in hopes of finding the perpetrators and bringing them to justice with the help of her childhood friend, Henry. Then a stranger from college arrives with her lost coat, missing driver's license--and details to help fill in the gaps in her memory that could be the key to solving both mysteries. But who is Andrew Worthington and why is he offering to help her? And what other dangerous obsessions is her sleepy town hiding?

Surrounded by secrets and lies, Catherine must unravel the truth--before this wolf in sheep's clothing strikes again.
Read more
Read less
Read Excerpt
+ Add to My Bookshelf
+ Add to Goodreads

Book Quiz: Could You Be a Detective in a YA Mystery Novel?

Catherine stared out the window of her bedroom and thought about throwing herself out of it.

She could do it, too. There was a screen, but she could unlatch it, or kick it out the way people did in movies. Or cut through it with a knife the way the serial killers did in movies. She’d crawl out like a cat onto the roof, the tiles hard and gritty under her palms, then she’d stand up, breathe in the gray winter air, and run until that was all there was under her bare feet.

She turned, dropping her duffel and stepping away from the window. Her mother was in the doorway, all soft blond hair and wide eyes. Her sweater was overlong and swallowed her wrists.

My mom is smaller than I am, Catherine thought. When did that happen?

“I wanted to see if you needed anything,” her mother said, taking one small step into the room.

“Your father could have gotten that for you.” A gesture toward the bag at Catherine’s feet.

Yes, Catherine thought, he could have. But that might have required him to look at her, and he didn’t seem able to do that since she came home. So different from just Thanksgiving break last month, drinking cider on the couch, small dessert plates balanced on their laps, all of them laughing at a car commercial for some reason she couldn’t remember. But now there was something between them all, a wall her mother touched with outstretched fingers, making patting and smoothing motions without actually reaching her. But her father made no attempt at all, seeming grateful, in fact, for the barrier.

“Of course.” Her mother, after a brief hesitation, crossed the room, hands reaching out. A nurse’s hands, slightly rough, used to dealing with emergencies that weren’t her own. “Can I . . . ?”

Her mother hugged her. “I’m so sorry, dear.”

Catherine nodded against her mother’s neck, her eyes fixed on the flat of her bed, the stark white coverlet, dotted with gold and silver suns, moons, and stars.

Her mother pulled away, wiping her eyes, which were a little darker blue than Catherine’s. A little more beautiful. “I’m sorry. I shouldn’t.”

Her mother stared at her blankly, eyelashes wet.

“About what happened,” Catherine added unhelpfully.

“I just don’t want to talk about it. Whatever it was.”

“Of course not.” A pause. “Do you remember anything more?”

Catherine walked toward the bed and crawled under the sheets. They were cold. She made herself smile at her mother.

“The curtains?” Her mother made to draw them closed.

“No,” Catherine said, a little too quickly, then—­“Sorry. No. Leave them. And the light, too. Please.”

Her mother left. Catherine turned where she lay and looked out the window. It was a typical Washington afternoon, low gray light and the promise of rain. Trees everywhere, the ones not bare such a lush green they looked painted. She’d been studying William Blake at the university: his poetry and his art. One of his works, a depiction of Dante’s hell, was called The Woods of the Self-­Murderers. Suicides were damned to the seventh circle and entombed in trees—­trees that Blake drew hunched and brittle-­brown, so unlike the tall, healthy ones outside her window. Catherine noticed something in that painting, something you had to look at closely to see: human forms traced inside each trunk. A man was hidden in the right tree, but she had eyes only for the woman on the left, who was trapped upside down, her hair spilling over the roots, her feet lost in the branches above.

“They are the only souls in hell with no possibility of redemption,” Professor Graham had explained in the dim light of the classroom, the watercolor projected massively on the wall, “as they rejected God’s gift of life.”

Catherine twisted away from the window now, eyes screwed shut.

Do you remember anything more?

I was still, she thought. Couldn’t move. There was laughter. Pain. Like hell.

She didn’t think she’d slept at all, but when she finally sat up the clock on her nightstand read two in the morning. She got up, wrapped herself in a thick bathrobe, and felt her way along the dark hallway to the stairs. When she reached the kitchen, she flipped the switch that turned on the light just above the sink; turn the other switch and the whole kitchen would light up like a spotlight and there would be no shadows at all.

She poured herself a glass of water and went onto the porch, but she stilled as soon as she opened the door.

Her father was sitting on one of the porch rocking chairs, eyes staring out into the darkness.

“Catherine,” he said, turning to her.

“I was just getting water.”

He nodded, leaned back in his chair. “It’s cold.”

She didn’t know what else to do, so she took a sip of water.

Catherine had no idea what snow smelled like; it barely snowed at all in West Falls, just a few inches each year. She drank again, trying to drain the glass so she could make an excuse to get more and then go back upstairs.

Her father looked smaller than usual in the rocking chair, as though he’d lost weight. His dark hair was thinner too, his eyes just as dark behind those wire frames. She remembered seeing a picture of him once without them, when he’d been much younger. She hadn’t recognized him, so straight-­backed, his hair thick and glossy. He was the kind of man who looked like he’d been born middle-­aged, with glasses and a slightly rounded spine, but then, maybe all children saw their parents like that.

He taught history at the alternative high school on the edge of town, talking endlessly of wars and commanders and laws created and amended. He even had a table of antiques upstairs, collectables from years of infrequent, all-­day auctions, him coming back with wrapped packages, carefully unfurling brown paper at the kitchen table, his eyes alight with excitement. “Your father’s Christmas,” her mother had called it.

Catherine blinked at the night, trying to get her father into focus. “It’s cold. I think I’ll go back upstairs.”

He nodded. She heard the creak of the rocking chair. He was right; the air did sort of smell like snow. Or maybe it just felt like snow, a heaviness to the air, a potential energy waiting to fall from the sky.

The facts were these and she was not proud of them.

One: she’d gone to the party. Sigma something. Maybe a Psi in there as well. Two: her dress was yellow and short and thin cotton that danced when she moved, her blond hair curled at the ends to brush her collarbone. And she did move—­three—­dancing and spinning. Four: she drank. Cheap boxed wine and then something green-­blue that burned. No drugs in the drinks—­she thought, then tried not to think about that at all. Just too many of them. Strangely, she felt guiltier for that. So much on her shoulders, her choices all her own.

Or was that with four? Levels of drinking. All of them wrong but some more wrong than others, like Dante’s circles of hell, a punishment to fit the crime and she was a woman upside down in a tree, damned, her hair tangled in the tree’s roots, all the blood rushing there as though the tree were feeding off her blood instead of rain.

He fed off her too. She didn’t know who. She didn’t even remember getting to the dorms back on campus, much less who the room belonged to. The one she woke up in hours later, before the sun was up, a dark room with a tall figure standing over her. He’d been hard to see without any lights on and the window showing only a black sky. He was shaking her.

She tried to push him off, turn over, into the cool covers, but the covers weren’t cool and she smelled smoke and turned the other way, coughing. She shoved at the hand on her.

“I’m up,” she managed, pulling herself into a sitting position.

She wiped her eyes, swallowed. Her throat was so dry it hurt and she wanted to cough but was almost afraid to. “Water,” she said, without thinking. Her dress felt twisted around her.

A sigh. Footsteps. The tall shadow in front of her walked to the other side of the room. She heard a tap run and then shut off seconds later.

“Here.” A cup in front of her face. She could just make out the edge of the rim. She took the cup, feeling for the first time a shiver of unease, but she was thirsty so she drank. It was just enough for a mouthful.

“Thanks,” she said. “Where—­?” But she broke off. She’d righted herself a little more, shifting against the mattress, and an awareness of her body flung itself into her mind like a blow. She froze where she was, not moving at all, her mouth half open as her lungs inhaled sharply, burning her raw throat, which the water had not helped.

Fear came like a blackout, sudden and complete. A terror out of nowhere.