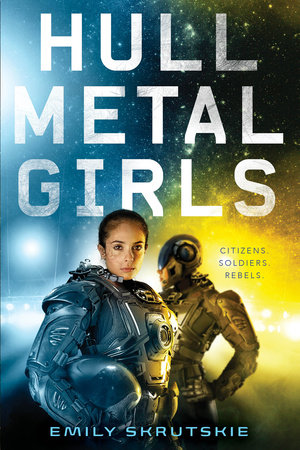 By Emily Skrutskie
From the author of Bonds of Brass, don't miss Hullmetal Girls, which NPR calls "a little Ender's Game, a little Hunger Games, [and] a little Battlestar Gallactica."

Aisha Un-Haad would do anything for her family. When her brother contracts a plague, she knows her janitor's salary isn't enough to fund his treatment. So she volunteers to become a Scela, a mechanically enhanced soldier sworn to protect and serve the governing body of the Fleet, the collective of starships they call home. If Aisha can survive the harrowing modifications and earn an elite place in the Scela ranks, she may be able to save her brother.

Key Tanaka awakens in a Scela body with only hazy memories of her life before. She knows she's from the privileged end of the Fleet, but she has no recollection of why she chose to give up a life of luxury to become a hulking cyborg soldier. If she can make it through the training, she might have a shot at recovering her missing past.

In a unit of new recruits vying for top placement, Aisha's and Key's paths collide, and the two must learn to work together--a tall order for girls from opposite ends of the Fleet. But a rebellion is stirring, pitting those who yearn for independence from the Fleet against a government struggling to maintian unity.

With violence brewing and dark secrets surfacing, Aisha and Key find themselves questioning their loyalties. They will have to put aside their differences, though, if they want to keep humanity from tearing itself apart.

“Filled with badass girls and epic adventures…this one's guaranteed to take you on a ride.”— Buzzfeed

"A captivating sci-fi adventure that will make you fall madly for Skrutskie's fabulous writing, if you haven't already. [Perfect] for fans of: Cindy Pon (Want) and Pierce Brown (Red Rising)."-- Paste

"A book you will devour in one sitting, Hullmetal Girls is not to be missed!"—Beth Revis, New York Times bestselling author of A World Without You and Across the Universe

"Hullmetal Girls has everything I love in a space opera: deep faith, high stakes, endless questions about humanity, and a cast that shows the best (and less-best) of what we might become." -E.K. Johnston, #1 New York Times bestselling author of That Inevitable Victorian Thing

In the quiet of the early morning, before the Reliant’s lights begin to glow, I plan two funerals.

The first is for my little brother. Amar lies in the far corner of the room, a mask over his face to keep him from breathing his affliction into the rest of us. He’s mercifully asleep, and part of me hopes he’ll stay that way until I leave. With the wasting fever’s claws in his tiny body, he needs every moment of rest he can get. His funeral—-if it happens, if the worst happens, if I fail—-will be a proper Ledic ceremony. A temple service, a reading from the scripture, a procession to the airlock. Prayers for his soul’s journey following him into the vacuum of space.

The second funeral is my own. All it takes is the scratch of my initials at the bottom of a datapad. There will be no service, no scripture, no procession for me. If I don’t survive the procedure, my body will be incinerated before anyone has a chance to pray over it. There’s an option to return a portion of the ashes to the Reliant, but there are no half measures with a true Ledic burial. I’ve accepted that I’ll never get one.

“Aisha?” I turn to the door, where my aunt Yasmin stands silhouetted by the light in the hall. Her hair is loose from its usual plait, and it makes her even more of a stranger than she already is. “Did you sleep?”

I shake my head, holding up the datapad. Yasmin slips into the dark of the room and pulls it out of my hands. The glow of the screen deepens the wrinkles at the edge of her eyes and swells the dark bags beneath them.

When she reaches the end of the page, she gives me a sharp look. “You’re sure?”

I flinch. Of course I’m not sure. Of course I’m scared to pieces. Ever since I showed up on her doorstep mere hours ago, she’s been asking variants on the same question. Aren’t there other options? Is this really what Amar needs? You know there’s no coming back from this, right?

My empty stomach keens, and I swallow back the sour taste in my throat. Fasting to conserve money for Amar bled easily enough into fasting for the surgery. Between that and the recent recruiting drive, it almost feels like fate. Providence. A sign I’m meant to walk down this path. None of that is enough to pull the fear out of my heart.

So I’ll just have to do it scared. “This is everything you’ll need to get the first payments,” I say, nodding to the datapad. “And instructions for if . . .”

A glance at the corner of the room finishes the sentence I can’t bring myself to end. Silence settles over us, broken only by the slight noises of Amar breathing against the mask and the deeper, ever--present hum of starship machinery.

I sink my face in my hands, my fingers pushing back the edge of my headscarf. “Don’t,” I breathe. There are no better options, and even if there were, there wouldn’t be time to take them. At the rate Amar’s illness is progressing, he’ll be sent into quarantine aboard the starship Panacea before any treatment I can afford will take hold. And if he goes into quarantine, he won’t survive it. I can’t let Yasmin sway me.

But instead of wheedling, her voice drops low and urgent. “There’s something I need your help with. After you’re . . .”

This morning is filled with sentences we can’t seem to finish. I pull my hands down over my mouth, breathing out my nose into the space between my fingers. Wariness tugs at me, nudging through the quiet terror that’s kept me up all night. “What is it?”

In the half--light from the hall, I can’t quite read her expression. My aunt purses her lips, her brows lowering. “I need you to—-”

A sudden burst of coughing from the corner of the room interrupts us. I push past Yasmin, dropping to my knees at my brother’s side as he shudders back into consciousness. “Easy, easy,” I whisper, pulling the bottom of my headscarf up over my nose. Love and revulsion wage war inside me, but in the end I know I can’t touch him.

Amar blinks slowly. His eyes are slightly gummed at the edges. Furious purple tracks run down his face, the undeniable marks of the disease etched into his skin. “Hurts,” he keens.

Yasmin’s hand lands on my shoulder. “The shuttle leaves soon. I’ll go get Malikah up to say good--bye.”

I nod, trying to keep my breathing shallow as my heart balloons inside my chest. With no sleep and no food in my stomach, I’m struggling to grasp the reality of this moment. This is happening, I tell myself. I’ve made my choice. I can’t back down.

Yasmin slips out the door, leaving it open so the light floods in. Amar’s eyes roll as he takes in the room—-sparse décor, threadbare red drapery, the ceiling cracked in unfamiliar places. “Where are we?” he whimpers.

I clamp my free hand under my arm to keep from reaching out and brushing away the hair plastered to his sweaty forehead. “We went to Yasmin’s,” I tell him softly. “She’s going to look after you now. She’ll make sure you get better.”

His face screws up with alarm. “You’re leaving?”

I make soft shushing noises into the fabric of my headscarf. “I have to go. I . . .” I hesitate, stuck on how I can explain the economics of my choice to a six--year--old without sounding like I’m blaming him for what’s about to happen. He’s too sick for me to leave him alone anymore, but my janitor’s salary isn’t enough to pay for his care. “I’m taking care of the money, so you don’t have to worry and Malikah doesn’t have to work.”

I don’t specify how I’m taking care of things. In his feverish state, it’ll only be fuel for nightmares that his weakened body might not be able to handle. It’s best for him to rest now, which means it’s best I get out of here fast. I bow my head, breathing out a soft prayer as Amar’s eyelids droop.

They take Pascao into the surgery before me, and fifteen minutes later, they’re wheeling out his broken, twisted body.

He’s the fourth person to die today, but the first I remembered to pray for. Guilt hums through me, and I duck my head as the gurney trundles past and veers down the hall to the incinerator. Pascao gave up his seat for me when I arrived in the overcrowded waiting room. He helped me read the orientation docs, filling in the places where my vocabulary failed and puzzling with me over what things like purity of integration and biostasis meant. He smiled a lot, and he was volunteering for similar reasons—-a family in need, a sense of duty. I tell myself that’s why I prayed for him.

I’m lying, though. If those were my reasons, I’d be muttering strains for everyone in this line. With unrest growing in the Fleet and a slew of Fractionist rebels arrested just last week, the General Body has launched a recruitment drive. The waiting room is crowded with desperate people answering the call, and every single person here runs the same risk as Pascao.

But prayer can’t do anything for the Godless grip of Scela machinery.