Behind the Scenes with Kelis Rowe, Author of Finding Jupiter

> Discover > Articles > Behind the Scenes with Kelis Rowe, Author of Finding Jupiter 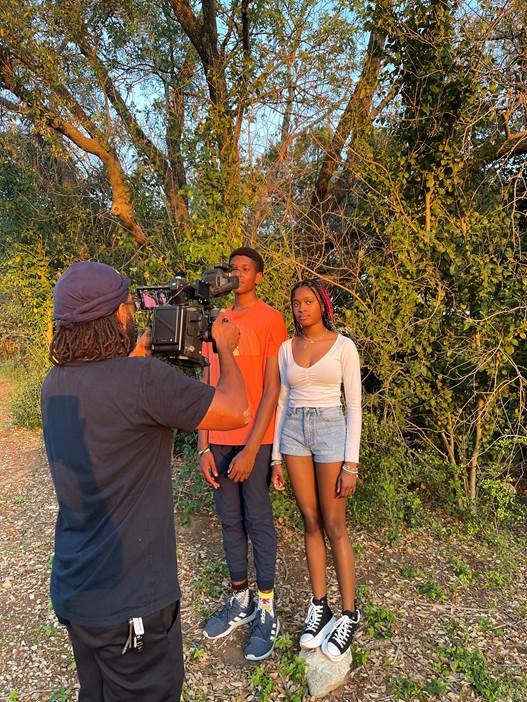 Finding Jupiter by Kelis Rowe is a dreamy, romantic, and powerful story about two star-crossed teens who have pasts filled with secrets that threaten to tear them apart before their love story even begins. This book blends poetry and prose, creating an entirely unique reading experience. This is THE love story of the summer. . . .

Can you tell us more about the poetry in the book? What inspired you to tell your story with a blend of poetry and prose?

Finding Jupiter is the first book I’ve ever attempted to write. When I knew that I’d be writing for teens, I wasn’t sure if I’d ever write another one. But I did know that I wanted my book to be artsy, unique, and entertaining, and I wanted it to have an impact on the way teens practice self-care. I think Black American teens have so many things to overcome as they grow up and prepare to show up in this world as adults. While my book will certainly entertain and impact all teens, I took great care with what my book would mean and imply to Black teen readers in particular.

My main characters both create different kinds of art, but not for consumption by others. Ray creates art and poetry to process her rich internal emotional life. Orion sings and learns to play songs on his acoustic guitar, but only for his cats. In the age of TikTok, I wanted to inject a subtle message that art is good and beautiful, even if it’s only enjoyed by the artist. Drawing, creating original poems, and spending hours in the library down the street were big parts of my survival toolbox as a teenager. I tried to give Ray one of those hobbies, but I couldn’t pick just one. Thankfully, found poetry was the natural, perfect marriage of art, poetry, and books.

How did you come up with the names for your characters?

Initially, I was going to try to write fantasy. I started reading YA in my thirties when the Hunger Games movies came out. I came across the film when the first three books were already out. So, after I exhausted the number of times one could respectably rewatch a single film, I read the three books that were out back-to-back—all three, twice, then listened to the audiobooks a bunch of times. I stayed with fantasy for a long time.

I’ve always felt a strong connection to the night. In the early days of musing about becoming an author, I played with an idea about a Black girl from space. I saw Brianna McCarthy’s Vetiver Night Women, a series of beautiful, black-skinned women with night-sky skin, and played with the idea for a short while. When I eventually started my contemporary YA romance, I still needed the night sky to be prominent in the story. I played with all the names of the constellations and planets—all things galactic, including Nebula and Moon. Tori Amos was a huge part of my college-life soundtrack. Her song “Hey Jupiter” came up on my playlist one day, and I took that as a sign. Orion is easily the most popular constellation and son of the sea god Poseidon. With Orion being a champion swimmer, it just made all the sense in the world.

What are some of your favorite love stories or rom-coms?

My favorite YA love story to read is All the Things We Never Knew by Liara Tamani. It was published just after I sold Finding Jupiter, and they are definitely book cousins. If you love Black, dreamy, sensitive top-athlete boys and artsy, poetic girls, here you go. I loved that we were doing the same thing on earth during the same time, so I reached out to Liara and gushed about how we both have similar artistic missions. I was so happy to get to know her when we met up for lunch last year, and we have become easy friends.

My favorite rom-coms to read are Sophie Kinsella novels. I just read her novels and laugh out loud and wish they were all films. I prefer to listen to the audio versions so I can hear the British accents.

My favorite romantic film is Dirty Dancing, forever. It was the first VHS (kids, please google this ancient term) I ever owned, and I watched it every day for months my junior or sophomore year in college. Love Jones is a very strong contender.

Describe Finding Jupiter in one word.

How did you choose which scenes you wanted to film?

Choosing which scenes to depict in the trailer was the easiest thing in the world. I visualize every scene for days before I write it. By the time I get to the page, I want the reader to experience the scene the way I had. My writing is very cinematic. I picked the moments that had the most sentimental value to me and the swooniest impact in the book; I added two more to introduce the characters, and voilà! Ray and Orion underwater, Ray in the tree house, Orion swimming, and the pinkies were easy ins. Re-creating the cover was too obvious to pass up.

What was the most important thing you wanted to come across in the video?

Black joy. Young Black love. That universal thread that is familiar and connects us all—the butterflies and sweetness of first love.

How long did it take to film? How did you choose the filming locations?

We filmed the trailer over three days, about one or two hours each day. We filmed the waterside moments at a duck pond in the Arboretum shopping area here in Austin, and then went straight to Playland Skate Center, which I rented out to film the skate scene. The pool scene was filmed in the backyard of a very kind man named Simon. The tree house was a special find. We had decided to do without one, but after we’d filmed the other scenes, my friend Tyresse texted me that a family friend had just completed a tree house for their eleven-year-old daughter, Yelena, who hadn’t even used it herself yet! She was away when we were filming, but she sent her favorite plushies to make cameos in the trailer, and I brought some props from home and purchased others. I made all the art you see in the tree house, including the homemade Kwanzaa poms. The interior of the tree house didn’t make it into the trailer, but

I left the blanket and art supplies I’d purchased for her as a thank you. I always wanted a tree house, which is why I put one in my book. And I got to decorate a tree house. How many dreams can come true at once?

Who are the models?

I have the best friends with the most gorgeous kids! I invited several of my friends to bring their kids out for pizza and hired them to be extras to create the skate party. Orion is played by Ben King, whom I’ve known since before he was potty-trained. Ray is played by the stunning Brianna Bady, whom I’ve known since before she had all her teeth. (And yes, Bri in Finding Jupiter is named after her.) My son, Zachary Dennie, is Orion’s competitive swimming body double.

What is your favorite part of the video?

My favorite part of the video was making it and discovering the genius of the filmmaker Justin Humphrey. I was a sobbing mess when I saw the final footage, all thanks to his beautiful touches. That moment in the transition where Ray looks directly into the camera—she shows herself to us. Ray had spent so much of her life not showing her true self to anyone, and it hit me right in the feels.

Fun fact: The model can’t skate, lol. Although Ray does stumble in the skate scene in the book, the moments in the skating rink where Orion is catching her and when they’re laughing in the pool are actually candid moments that Justin caught while the camera was still rolling in between takes. Her radiant smile is everything, and all the credit goes to Justin for injecting those beautiful moments of joy into the trailer. He was recommended to me by our family photographer and, once again, the stars gifted me with another person in my creative village who has a similar artistic mission to amplify Black joy.

Sparks fly when Orion and Ray meet for the first time at a roller rink in Memphis. But these star-crossed souls have a past filled with secrets that threaten to tear them apart before their love story even begins. Found poetry, grief, and fate collide in this powerful debut.

Did you enjoy this Kelis Rowe interview? Find more book recs here, and get social with us at @getunderlined!

Start Reading an Excerpt of Silver in the Bone by Alexandra Bracken Now!

Who killed Brooke Donovan? Everyone in Castle Cove thinks they know what happened. But they're wrong.