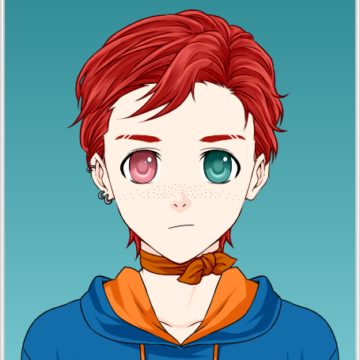 After the sixth attempt and once Bailey had left the entertainment complex that night, he groaned, regretting turning him down again. Of course he knew James was asking him out, he knew the first five times too, he just couldn’t accept the offers. He wanted to, and he could plainly see that the brunette had no idea despite Bailey’s horrid attempt at binding his chest, but something in the back of his mind was still telling him that James was messing with him. Every time James looked at him, he felt happiness at the way he noticed him, but too he felt apprehension because no matter how naturally deep his voice was or how tightly he wrapped the bandage around his torso, he was still afraid of being caught out.

“Maia, darling, how are you?!” The blond froze up immediately when he heard his mother’s voice and turned to see her standing by their family car, waiting for him to walk over.

Bailey could try and ignore her, but she would start an argument if he did, so he resigned himself to another night of being a daughter. He smiled a little at Rose, his mother, wandering over to the car and hugging her tightly.

“How are you, mum?” He asked softly, flinching just slightly when her hand touched directly over the area of his back where the bandage was.

“I’m fine, baby girl. You look gorgeous with your new short hair, you know, I love this new look.” He could see the hesitation in her eyes as she complimented the short haircut.

If this was all the acceptance he got from her right now, he would take it. It was a step forward after the yelling six months ago about cutting his long hair.

“Thank you.” He smiled, squeezing her hand gently.

Rose nodded quickly, petting his head and opening the car door for him, getting in at the drivers side.

“Your father is meeting us at the restaurant. He’s excited to see you after 3 months.”

Bailey didn’t say anything. There was no doubt his mother was lying.

They eventually pulled into the car park of the carvery restaurant, immediately making him feel sick when he saw the dark-haired man sitting at a table, swirling a glass of scotch in his right hand.

“There’s my daughter, come over here and give your papa a kiss!”

He was obviously a bit tipsy at the point. Bailey stayed quiet, kissing his cheek as quickly as he could and sitting down on the other side of his mother so he wasn’t near the man who was watching him with a smile. It took around ten minutes into the meal before the transphobic comments started, once he had finished the drink in his hand completely.

“So, are you still sticking a ***** down the front of your jeans? Is this a new lesbian fetish that I haven’t caught up with yet?”

Bailey almost choked on his food, gripping his fork tighter. This is why he moved out. This is why he hadn’t seen these people for three months. But still, he would do anything to be accepted by them, even if it meant taking the ridicule until they understood.

Luckily though, he didn’t have to respond as his mother spoke up.

“I think you’ve had too much to drink already, dear. Eat your dinner.” She told the man, smiling.

He smiled to himself a little, glad his mother had stuck up for him, until she was looking behind him, and a whole new problem presented itself.

Who the hell was Rebecca?!

“I’m so sorry I’m late, Mrs Thompson! I was distracted by my homework and lost track of time.”

Bailey looked up at the new addition to the table. She was pretty, very pretty, but he wasn’t sure he understood what her purpose was at this particular dinner. That was until his father spoke again.

“Maia, this is Rebecca. She’s a lesbian like you.”

The blond’s eyes widened in shock and he started panicking, his whole face bright red. The pain in his ribs wasn’t helping the situation either. When the wrapping pain began to get worse, he smiled kindly at Rebecca before escaping the situation quickly, running to the bathroom.

A few of the guys in there glanced at him but not aggressively, going back to their business. Bailey tried to calm his breathing, gripping the surface of the marble sink.

“Dude, just breathe. Whatever it is isn’t worth panicking over.” One of the guys at the urinals commented, the use of ‘dude’, even if it was a small thing, helping with calming Bailey down.

Just as he thought he could go back out, his ribs started becoming more painful and he locked himself in a cubicle, pulling off his shirt to find blood at the edges of the bandage. When he unwrapped it slowly, he found himself uncovering bruises that had developed throughout the past three days.

He had kept the bandage on through the night for the past two nights because it made him feel more comfortable, but now he was starting to regret it. When a small squeak of anguish left his mouth, the only guy left in the bathroom heard him and came over to the door to check up.

“Hey man, you okay in there? You need some help?”

Bailey gulped when he heard him outside the door, unconsciously covering his exposed female chest and trying to breathe normally. He was on the defense now.

“I’m fine. You don’t need to worry.” He replied in a somewhat strained but cheery voice, cringing when it made him sound feminine.

The guy outside waited a moment before speaking again, being careful about the way he worded his next statement.

“You know, my little brother had a lot of trouble when he was your age too. His binder was always hurting his ribs. You could take it off just for this one night? Give your ribcage a break.” He spoke gently, making Bailey’s breath hitch.

His eyes were already watering when he asked, feeling beyond self-conscious after being caught. It was like the first time his mother caught him with the bandage, he felt like a fraud.

“How did you know?” He asked timidly, his heart racing.

There was a small sigh from the other side of the door.

“I’m sorry if I’ve made you uncomfortable. I understand how bad it must feel to be pointed out, but for your health I hope you’ll take it off. Buy an actual binder before you break a rib.” He told him, patting the door gently before walking out.

Bailey gulped down the lump in his throat. He knew the stranger was right but he didn’t have his own money to buy a real binder without asking his parents. They weren’t even willing to call him Bailey so what chance would he have there.

He sighed, wrapping his chest again and just being thankful that his shirt was black so the blood didn’t show.

Walking out of the cubicle, he was glad no one else was there.

After splashing his face with cold water and drying off, he brushed his hair to the side and walked back out to the table, smiling at his parents and Rebecca.

“Maia, are you feeling okay? Do you have a fever?” His mother asked quickly when she saw his still red face.

It took everything in Bailey to not snap at her about using that name, but he managed not to and simply shook his head, sitting down beside her again.

“Well good! Maia, this is Rebecca Ormiston. She’s the daughter of one of the women I work with in the hospital. We thought you two would hit it off.”

At the mention of relationships, Bailey couldn’t help thinking about James, but he didn’t say anything. He knew this meant they weren’t okay with his transitioning. Deliberately ignoring his admission of being trans and only choosing the admission about being gay, they had automatically chosen to see him as their lesbian daughter.

How mighty big of them.

Bailey tried not to roll his eyes as his father started complimenting Rebecca on her appearance, clearly overcompensating for his lack of acceptance of gay people. He simply listened in, trying to find something about Rebecca that he liked so that he had something to ground their relationship on.

Her black hair was kind of nice, he supposed, nodding internally.

If he wanted to be accepted by his family, being the lesbian daughter would have to do. In fairness he was slightly more tired than usual, and in pain from the bandage, so he wasn’t thinking straight.

This probably contributed to the haze in which he agreed to be Rebecca’s “girlfriend”.