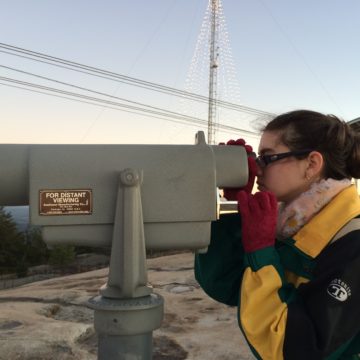 “Huh?” I looked up into the dead fish eyes of my co-worker Maureen. Boring, annoying, loud Maureen. Wonderfully ordinary, one in two Maureen.

“Did you hear me?” I shake my head. “Davis said he needs this month’s financial report by tomorrow morning.”

“Oh, awesome. Exactly how I wanted to spend my Thursday night,” I roll my eyes for dramatic effect.

“Yeah so go ahead and cancel your knitting club meeting tonight and get to work.”

Oh Maureen, you sweet, boring girl. I know you didn’t come up with that joke. You heard Jacob say the same thing to Bill in the break room yesterday. But you want to make me laugh, I know you do, because you love me. I laugh to appease you.

“Come on man! That’s the third week in a row that I’ve cancelled. I’m gonna get kicked out,” I whine. Maureen laughs like it’s the funniest thing she’s ever heard. And it is, I know it is. I’ve met your husband Maureen; the man is as exciting as a bowl of oatmeal. Cold oatmeal, made with water, in the microwave. “I’ll do it at home while I Netflix.”

Maureen winks at me (gag) and walks away. I keep my eyes on her until she disappears within her cubicle. Her nice, neat, boring cubicle, littered with pictures of her oatmeal husband and her two oatmeal kids. I chuckle out loud at the thought.

I gather my things, head to the parking garage, and get in my car. The clock on the dash reads 5:53pm.

Even though I drive way over the legal limit I’m still seven minutes late. A curse escapes me when I don’t see her and for a moment I fear that she’s left. But sitting in a dark corner, I see her familiar face. My beautiful number four, my favorite so far.

As soon as she sees me she beams. She’s missed me, I can tell.

Dinner goes as planned: she laughs at my jokes (who wouldn’t?), she bats her eyelashes at me (I don’t blame her), and she talks enough for the both of us (I don’t mind, all I care about is her anyway).

She tells me everything. Where she grew up, where she works, what college she went to. Things I already know but it doesn’t matter, I like hearing her talk. And she likes me. If she didn’t she wouldn’t be sitting on my couch.

She cries when she wakes up. They all do, they all cry. The first one pitched a fit; she got on my nerves. Even still, I look back on her fondly. No one forgets their first after all.

The first taught me so much. Like, how a knife was too messy and required too much clean up. Arsenic, on the other hand, is clean and quick.

She’s still quietly sobbing now as I descend the stairs into the basement. A sound proof basement of course, another thing my first taught me. Thank god my neighbors were out of town.

I pass my shelves that were lined with evenly spaced tubes of arsenic and walk calmly to the bed where she’s handcuffed to the bed rails.

“Are you hungry? Thirsty? I can bring you something.”

She presses her lips into a hard line and turns her face from me. She doesn’t trust me, but she will.

“You have to eat,” I insisted.

She remains silent. Fine. She’ll get hungry soon enough and I can be patient.

“I’ll be back later,” I get up and go upstairs to write my stupid reports.

I made her tea, well I made both of us tea. I set the tray with both of the cups on the bed in front of her. Strands of her hair have come loose and hang around her face. Such pretty hair.

“Drink, “I tell her, she turns her head away from me again.

Rolling my eyes I pick up her cup and take a sip. “See? It’s fine. Now drink.”

I extend my arm towards her but pull back when my phone vibrates in my back pocket. I pull it out and glance at the screen. Freaking Maureen. What the hell does she want this late?

I go upstairs to take the call in case my companion decides to scream.

When Maureen finally shuts her trap and hangs up, I walk down the stairs and pass my shelves, pausing to fix a slightly out of line tube. Back on the bed the cups sit just as I left them. She sits just as I left her.

“Unfortunately, it seems I have more work than I expected so our nice chat will be cut short,” I pick up my cup and I touch the rim to my lips. I pause to give her a smirk, “We have a lot to talk about.”

As soon as I took a sip, I realized it was poison.

A ringing fills my ears; desperately I claw at my throat as foam fills my mouth. I try to get up from the bed but all I manage is to fall to the floor. A shadow passes over me and makes me look up into her face, twisted with anger, hovering above me. A bent bobby pin by her feet; one manacle closed over her wrist while the other hangs open. The tray is in her hands, gripped so tightly her knuckles are white. She raises it over her head, opening her mouth in a scream I can’t hear over the ringing in my ears. All I see is her angry face formed into a silent scream before she brings the tray down on my head.

Then the ringing stops and I see nothing at all.