The Sadistic Surroundings of Sadie Spielman

This is my lame shot at trying to write a novel. Yes, it is only one chapter, but I honestly don't see a future with these characters. I hope you enjoy and I would appreciate any feedback! P.S. sorry for all the bad words, I understand I have a foul mouth. 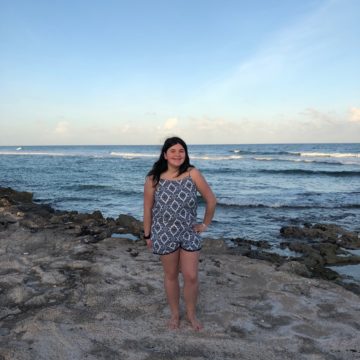 ****.  That was the first word that popped into my head when Dana and I decided to sneak out so she can hook up with her man candy, Casey James. It’s 2:30 in the morning in Hartville, Pennsylvania. And even though it’s 75 degrees in mid July it is cold enough for jeans and a denim jacket that I purchased at the local thrift shop like four years ago. We had to sneak past my mother, who is oblivious and is in her own world the majority of the time. In addition, we had to past my grandpa, Schmidty who has been wasted for the equivalent of how long I’ve been alive, and my dog, Barley.

Dana looks like a fifty cent *********** caked her face with my makeup, without asking, I might add. I don’t even want to sneak out. I’ve never done anything like this before, but Dana asked and since we just became friends again, I thought, Why the hell not? We spent the afternoon before at the town pool, and Dana was drooling over Casey. He’s eighteen, but she’s not even turning 14 till the end of August. Although, I’m worried, I want my younger, slightly bad judgement- calling lifelong friend to be happy.

Out of the two of us, I’ve always been the one behind in the boy thing, even though I’m almost two years older than her. She always tells me, “Sadie, you don’t have to be so shy all the time. If you just had a dose of confidence, guys would come flocking to you.” I guess I do have low self-esteem. I’ve never saw myself as conventionally pretty. There are things I like about myself, though. I like my button nose, my hazel eyes, and my straight teeth. But I’ve always been insecure about my body. I had twenty pound jugs strapped on my chest since I was 12, which has caused my back to ache, and my stomach is definitely not flat.

As Dana and I tiptoe to the garage and the backyard, suddenly all these thoughts spin through my mind. What if we get caught? What if he brings beer and he makes fun of me for not drinking? What if he hurts her? I tried to reassure myself that it was all going to be fine, that I was being a normal teenager doing normal teenage things. But still, I couldn’t get the annoying, ****** know-at-all side of me to shut up.

We sit outside on my porch, waiting till he shows up. Ten minutes later, he flys past my house on his bike that he probably owned since he was twelve. Dana told me that he’s been arrested before and that’s why he doesn’t drive, but I never asked what for. I made up scenarios in my head, though. I thought maybe it was for drugs or something, but oh I was quite wrong.

Casey has a huge smile on his face, like he knows he’s going to lucky. Dana runs to him and wraps her arms around him as they give a huge embrace, even though they saw each other a little over twelve hours ago. He gets closer to the porch and gives me a small smile. “Hey Sadie,” he says. “Thanks for being so cool with this.”

I politely smile back, but I’m internally screaming. So cool with this? I was practically forced to do this. Seriously, Dana would get the Manipulator of the Year Award, if there was such thing. “No problem, happy to do it.” Jesus, I’m lying through my teeth, and I’m starting to become delusional.

We start walking around the neighborhood. Hartville is a small town that consists of about 1200 people and there’s absolutely nothing to do. My friends and I usually just walk around, go to the park and the town quicky mart. Sometimes we just sit on my back porch, where it faces a huge soccer field, and smoke weed. I’ve actually became that white suburban teen cliché who uses substance abuse as a way to cure her boredom. Dana and Casey are holding hands and sneaking soft kisses as I walk a step behind them.  ****, I’ve became the third wheel. Why is the girl with abandonment issues always the third wheel?

We start smoking Casey’s juul. I’m usually not a fan of nicotine, but when I’m feeling this anxious, I’ll do whatever the hell I can do to get by. Dana looks behind me and mouths, Are you okay? I nod. I guess I am sort of being antisocial, so I decide to join the conversation. Casey asks me if I know his ex girlfriend, Maribel Stevens, since Maribel and I go to the same school and Dana and Casey belong to the school district in the town next over. I say I do, but I don’t know what else to say, so the conversation halts to a complete stop.

But the longer we talk the more I get comfortable, even if I find Casey sketchy. There’s something him and Dana are hiding from me, something more than him getting arrested, which was apparently for sucker punching his dad. We finally make our way to the trashy part of town, Main Street and Skid Row. On Skid Row, there’s a blue and white duplex that once used to be painted orange. There lived the man who changed my whole life, and not for the better.

The man who used to own the formerly orange duplex was named Michael Bram. Ten years ago, when I was five years old, my mother and I moved to this God **** hillbilly town after my dad was found in bed with his secretary. Not long after, my mom met Michael at the market. Next thing I know, he’s showing up with my mom to pick me up at the bus stop. Few months later, Michael was left alone in our old apartment while my mom went to buy groceries. It was my bedtime. A few minutes after Mom left, Michael slipped into my bedroom, and took away the innocence that no little girl should be taken away.

When we approach the house that had once belonged to Michael, I panicked. My breath became inconsistent and my heart was beating so fast. I halt to a complete stop.

“Is this an anxiety attack?’ asks Casey

“What are you talking about?”

Dana shakes her head, but her eyes say I’ll tell you later.

Finally I start to drift away from the house, stepping slowly as Dana and Casey follow close behind.