Character introduction Ellie is a high school girl with no friends until she meets a boy who had been rude at first but over time they became friends and fell in love. Rikki is an assassin who was sent to the high school to kill ellie. But, he had fallen in love her at first sight. He was rude to her to hide it but her would try to protect her with his life. 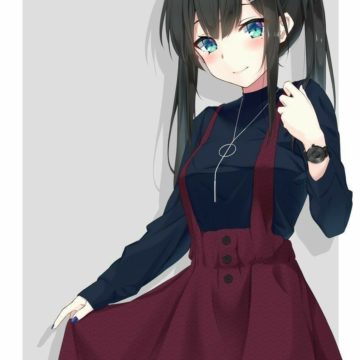 I woke up later than usual this morning… it was already 6:30. I got ready, but I didn’t bother to rush anything after all school starts about one hour after I arrive there anyways. I was about to say see you after school but, I already knew my parents wouldn’t be home. I went out the door getting ready to get the day over with. I walked all alone even though the butler says he’d give me a ride but, the whether was not that cold unlike other mornings. (30 minutes later) I felt a cold breeze against my face, I felt so over heated so this was just what I needed. ‘7:20 am‘ I thought looking down at my phone. I finally arrived at hel- school. I was walking through the empty halls staring at the ground. I eventually bumped into someone.

“I’m sor-” “Watch where your going!” he coldly said brushing me off like I were nothing. He walked off as I sat on the ground confused. I finally got up to check the time “7:40 am?!? I’m gonna be late!” I quickly ran up to class not bothering to put anything of mine away and went into the classroom. “Ms. Elizabeth you were almost late… again” Mrs. Lizzy sternly said sending a disappointed look my way. ‘I hate you to ******!‘ I wanted to yell so badly.

“Ellie every time we have a new student your always late.” Her voice sounded more annoyed than usual but I just ignored her. But I didn’t know about this new student although I don’t pay attention to what the people in this place talk about. I thought about the male student I bumped into earlier ‘Was he new? I really should pay more attention.‘ Thoughts about the new student whirled in my head until I heard the bell. “Come in dear!” Mrs. Lizzy yelled loud enough for the class next door to hear.

The same exact boy who I saw earlier walked in. “Hello sweetie please tell us your name and where your from!” She chirped. “Hello everyone I am Riki Grey Masamune (Moss-ah-moon-ay) and I’m from Saporro, Hokkaido!” All of the girls- except for me started saying he was cute or he was hot I mean I might not like the guy as much as they do but, he is the type of boy who had really good looks. The girls were literally putting on a face to beg him to sit with them but the teacher chooses are seats. Luckily there were to seats other than the one next to me open, ‘please don’t let him sit by me’ I hope and the useless teacher crushed my hopes and dreams to be alone. That useless teacher told him to sit next to me. “Why does it have to be me?!? These other useless ****** are begging him to sit with them!” Despite the the fact I basically insulted the other girls in my class they were on my side. The teacher told us to and I quote “Shut up you annoying ***** half of you have boyfriends!”

After a while of arguing Riki sat right next to me with a smug look on his face “Hey clutz.” “Shut the **** up” I starting saying still annoyed a lot about him sitting next to me so I tried to push his seat away from me but, he moved closer to me looking like a lost puppy. I have to admit he was kinda cute… okay fine he was absolutely adorable I wanted to hug him but, then I would feel like I lost to him.

He stared at me studying my body structure for a long time which sucked because I had to even eat lunch with him. He was near me a lot which I kinda liked mainly because if any girl was rude to me he’d stick up for me so the company wasn’t that bad. But then he tried to follow me home “What’s up with you? Why are you following me? Wait your not a stalker are you?” “No um Ellie was it? Don’t you think that my house might be near yours?” My face was flushed I felt so embarrassed at that moment. “G-Gomen’nasai!” I felt his hand ruffle my hair a little giving me a warm smile. He said he had somewhere to go and would see me later.

Ellie and I walked away from each other although I didn’t want to leave I had to meet him. I went to the ally way where I was told to meet him. “Riki?” He asked waiting for me to answer probably thinking he had the wrong guy “Yes sir?” “Have you killed her yet?” He sounded like he were about to yell at me. “I’m sorry sir but I can’t kill Ellie-chan.” He wasn’t to satisfied with my answer. The man who hired me chuckled and stated that he would kill her but, he also tried to persuade me with money. He stated that Ellie wasn’t a very normal person she was special he said he even offered me more money than any other person has ever offered. Ellie or money? Ellie or money? Ellie or money?!? Ellie money is replaceable for me but, Ellie? No price could be put on her so I sternly rejected he just shrugged, got in his limousine and left.