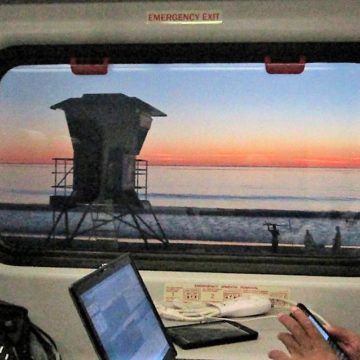 After we broke up, I admit I was shattered. Your personal storm hit my planet, rocking and rolling it like a hurricane.

When you announced the split I agreed,

There are no good break-ups. Only bad, tear-soaked, sobbing ones, bursting during their death-throws with unspeakable emotions.

I could see how it happened. You were the most rigorous woman on the surface of the earth. I was the most easy-going guy on the face of the planet.

Finally, in time, I glued my pieces back together and gained what they refer to in dime novels as “perspective”. The storm clouds were gone, it was clearing up. I was taking the cure, thought I had it beat, and figured I was rid of the sickness that was you. The medicine was provided by a sweet little waitress and her name was Desiree. I finally regained my appetite for other women.

That’s what I figured.

Desiree was all this and all that and all everything else. She was the new woman of the moment. Totally caught up in her, I put your image on the back burner of my mind right where it belonged.

She had legs that went from the floor to her chin and azure eyes that could not be denied. I met her that winter at the park throwing snowballs with her friends. Up until then it had been My Winter of Discontent. Steinbeck had nothing to do with it. I gave her my best game and asked her out for coffee. She accepted. Then as we were sitting down in Starbucks, she took off her mittens and cap. Her hair cascaded down with wonderful dark curls that fell to her shoulders. That was the problem.

It was your hair.

In the spring I met Alexis. She couldn’t have been nicer. Her face was carved with the most delicate features. Her eyebrows were arched in much the same fashion, which is to say, in perfect arches, right above her sunglasses. I gave her my best pick-up line, and she agreed to go to lunch. When we stepped into the darkness of the bistro at the corner table, you know the one, she took off her sunglasses, revealing rich coconut-brown eyes, and out of nowhere it was Death in the Afternoon. Hemingway was not guilty.

They were your eyes.

That summer I ran into Brianna. How incredible she looked! She was taller than you, and nearly up to my head.

“A good match for kissing and other endeavors,” I thought.

I met her at the student union during a break. She was eating French fries and sipping a coke with her luscious pink coral lips through a straw.

“Here’s a winner,” I considered, “She’s nothing like Her at all.”

Her skin wasn’t your skin, not porcelain, not pale. She had that distinctive California bronze only surfer-girls have. And her hair wasn’t your hair, it was blond, and I have to admit I liked how it contrasted with the dark tan of her skin. Since it was summer she was displaying a lot of flesh what with her low-riding pants that hugged her hips just so, and her short skimpy top that clung in all the right places. And she was a serious student; to get a smile out of her was like winning a trophy.

Finally, I was hooked. We went to see movies, had dinner out, and after a week of seeing each other almost every day she invited me up to her place. A casual affair, that’s what I needed. I was game as all get out. Everything I said pleased her. Each move she made was perfection. At last, a perfect match. After we drank champagne, she grew giddy, and hinted at what was too come.

“Let’s go into my bedroom and see what mischief we can make,” she laughed.

Suddenly it was Heart of Darkness. Conrad was innocent as a lamb. Yet a black billowing cloud had invaded the space between us and refused to relent.

There was a problem with each of these women and I sensed it, and what’s worse, all of the rest of the women in the world would suffer the same affliction.

My thanks to Chris Brown, Michael, and Lady Gaga. Art begets art-Alexander Dumas

https://youtu.be/7V2GzYcRK9E She Ain’t You- Chris Brown