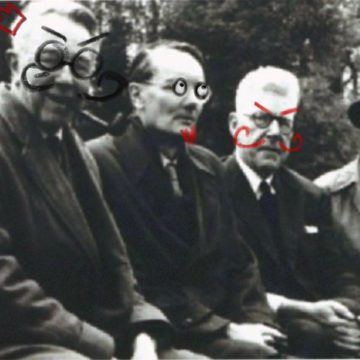 A pox on Hamlet, Tybalt thought with an inward laugh – now that is the question.

Eventually, after a brief stillness, he resumed his swaggering, turning his back on her with an airy sniff.

“I have many names, my dear,” he cast back at her over his shoulder, “and none of them are to be used lightly.”

He alighted on the base of the figure, spinning to face her again in the same, languid movement. He swung his violin onto his shoulder and settled his chin on the base, plucking slightly at the strings that ran along its dark, gleaming neck as he took his position to play.

“Are you an aristocrat, then?” she asked, her air turning business-like, suddenly ten years older.

Tybalt had to stifle a laugh. If only you knew, he thought, but said instead, “Indeed. I am a Prince.”

The girl frowned, making no effort to conceal her skepticism. Tybalt could hardly blame her. He’d be hard pressed to believe a stranger claiming titles in the middle of a lonesome midnight wood, too. “Prince of what?” She demanded.

“Not ‘what,’” Tybalt answered, adding with a smirk, before he could help himself, “but ‘when.’”

The girl did not find it remotely as amusing as he did.

“Ah,” was all she politely managed. Tybalt did not miss the trepid, half-step backwards she made, nor the sharp, angular dart of her eyes as she subconsciously searched for an escape–or, perhaps, even so much as a subject change. “Who were you talking to before?” She asked suddenly.

Tybalt answered with a one-shouldered shrug, returning her unwavering stare. Without looking away, he lifted his bow and struck up a song. Something sweet and beguiling, he thought, as he began to play, something to distract you. Unsettle you. Can’t have you coming too close to the truth.

“Why, who’s to say I was talking to anyone? Perhaps I was simply talking. Perhaps I simply dislike the silence.”

“But,” the girl protested, but trailed off, suddenly unsure of herself. Tybalt bent himself to the strings, throwing all the sickly, honeyed sweetness he could into the notes.

“I saw…” She hesitated again. Tybalt could feel her fighting the spell, floundering to keep her foothold against his music. Softly, he willed her, drawing out the song. Forget.

But there was a blaze – somewhere deep inside the child’s mind, a recess not even she knew about, probably, somewhere so remote that not even Tybalt’s song could reach – that, inconveniently, irritably, persisted.

“…Something.” She finished, determination and resolve setting her lips in a hard line.

Tybalt hid a cringe. Well, he thought, ********. “And what was is this something that you say you found? There are a great many somethings in the world, you know. An innumerable many, in fact. Be specific when you speak; it simply isn’t polite to keep one guessing.”

The girl took a careful moment to puzzle the question out before answering plaintively, “I can’t say what I saw because I don’t know what it was. She was like a cricket, but… She led me here.”

Her own answer seemed to add to her confidence. She took a step forward, leaning against the statue, while adding with a sigh, “but I know you were talking to her. Don’t you know what she was?”

Tybalt found he disliked meeting her eyes. Hard and green as emeralds, turned a dazzling oceanic blue in the watery moonlight – and, like any other faceted gemstone, he found himself growing dizzy the longer and harder he stared.

Eventually, he looked away, making a show of concentrating instead on the strings, his pale fingers dancing out a low, sleek, dark and elegant melody.

“Now, look here,” he said idly over the music, ignoring her last question, “there you go again with the non specifics. Either something is, or it isn’t. It can’t very well be both. Was it a cricket, or wasn’t it? And how should a cricket know to lead you anywhere?”

At this, the girl crossed her arms. “I said that she was like a cricket, I knew perfectly well that she wasn’t. And how can I explain what it is when I don’t know?”

It pleased Tybalt to see she was getting flustered, her face turning a bright scarlet underneath the grime. “I’d never seen anything like it before. It was dancing through the air and I followed it here. Speaking of which,” She cast around suddenly, “where exactly is here?”

Tybalt decided then that he liked this girl; her questions were hard and pointed as a ray of light, and could just as easily be misdirected. If she were the light, then he was more than happy to play the part of a prism that changed her course in an endless circle of frustration. The easier to make himself shine brightly–the easier to create confusion.

Tybalt uncrossed his legs and straightened, stepping slightly to the side of the statue, nearly out of sight of the girl as he swept away. His strides were slow and deep, caught in the rhythm of his own song as he turned his back on her.

“Why, ‘here’ is precisely where you are–here. It can’t very well be over there, or thataway–unless I suppose you were to move over there,” he gestured with his head even as he played, “at which point, it wouldn’t be ‘over there’ anymore–for when you stand ‘over there’, naturally, it becomes where you are, or ‘here’. Here is here, and there’s no point in getting around it.” It felt good to be saucy, he thought, and relished it before he spoke again quickly, “Now, if you were to ask what ‘this place’ is, well, that’s a different matter entirely.”

The girl’s nostrils flared – the only outward indication she gave that she was at all growing vexed with the conversation. Inwardly, Tybalt was forced to admire her perseverance. Most other encounters broke off before he could lead the dance in full circles.

“Very well,” she said coldly, “where is this place? Or do you not know? Perhaps you’re even more lost than I am…Sir.”

Tybalt felt the sting in her words – like an accusation, or a challenge.

He allowed the music to slide to a complete halt, the same way a dislodged bone or joint might slide out of place, hanging limp and unattended.

“Why,” he answered, “I can’t possibly be lost. For, in order to be lost, you see, one must first have a place in mind they ought to be, instead of the place they are. So you can’t possibly be lost if you’re don’t have a place to be, in the first place…Have I said that right?” He muttered his own words back to himself under his breath, shrugged, and slid the song back into place with a grin.

“Now, as far as knowing where this place is…” Here he winked at her, rounding the statue and pressing himself flat against it as he ducked out of her sight, “I haven’t the slightest idea.”

He ended his song with a sweeping flourish, then froze, willing the very light particles in the air, wane as they were, to bend and conceal him. He felt his energy drain in a rush as the light obeyed him–a kind of chill that dusted his spine as his own limbs vanished before his eyes.

Let the little dear puzzle this one out, he thought, even as his smile disappeared into thin air.