Meet sixteen-year-old Harry Osborne, along with other infamous characters who don't get as much attention as they deserve. Osborne, Felicia Hardy, and Eddie Brock all meet up in this action thriller. 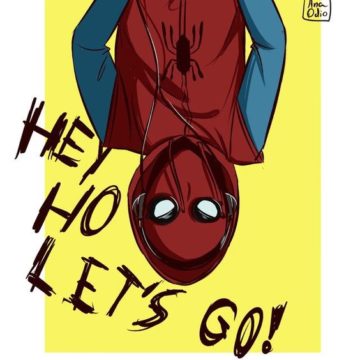 Algebra wasn’t my favorite part of school. I didn’t hate it, but I didn’t enjoy it all that much either. The stack of books in my arms seem like a giant loaded burden that all I’d like to do is pass on to some one else.

The loud clapping sound of footsteps echoes behind me. I turn, reluctantly, to see my best friend, Peter, racing towards me. My arms grow even heavier and two books off the top of my stack fall to the floor.

“Need help with those?” Peter asks.

I scoop up one of the textbooks and return it to my pile. Three more fall off.

“Are you kidding me?” I spout.

“Just let me help you already, Harry.” Peter pushes me back, grabs the cluster of books and puts them into my arms.

He raises his eyebrows at me.

We continue down the hall for a couple short moments of silence before Peter speaks up.

“Ned and I were wondering if you wanted to help us build the new Lego set he got.” Peter smiles like a child. Oh, right, he was. “It’s the Millennium Falcon.”

“Oh, boy, how exciting.” I throw a small hint of sarcasm into my voice.

“Please, Harry,” Peter says. “We never hang out anymore. Our families never see each other ever since Uncle Ben….”

He trails off, his eyes cloud with grief.

Uncle Ben was like a father to him. Even close to being one for me. I couldn’t imagine losing both the closest men in your life.

“Thanks.” Peter says. “It’s not just you, either. Aunt Mae has been so caught up and she hasn’t been able to invite you and your father over for dinner.”

“And you have that reporting job.” I say. “Not to mention the Stark internship.”

The bell rings and Peter adjusts his backpack strap.

“Good!” He calls, already heading towards his next class. “There’ll be food!”

Turning down a hall to my right, I enter the closest door into my classroom. I find my seat and situate myself. It’s hard to be comfortable in these chairs.

It takes me a couple minutes before I realize something is off. Very, very off.

The seat that used to be dormant in front of me is now settlement for a mop of long, blonde, almost white, hair. My mouth slowly draws open.

The figure in front of me spins around slowly. My teeth clench. She’s wearing a dark green sweater and a white jean skirt. Her eyes are so bright I look at my paper for a minute to make sure I’m not blind.

“Hey, there.” The girl smiles brightly. “My name’s Gwen.”

I don’t know what happens to me, but my blood runs cold and the name feels bitter on my tongue.

“And I asked?” I spit out. I wince at the sound of my voice. I’m about to apologize when Gwen continues.

I look down at my papers. Even deaf people know if you’re being ignored the other person doesn’t want to talk to you.

“Nothing wrong with being shy.” Gwen flicks a piece of her hair back and turns around in her seat.

“Sure.” Gwen says, not turning around.

I guess she’s familiar with the ‘two-can-play-at-that-game’ scenario.

“…So, our next partner pair-up will be…” I realize Mrs. Kingston is talking. “Mr. Osborne and Miss Stacey!”

Gwen turns around and flashes a ‘HELLO, MY NAME IS:’ sign. Underneath it is written in scribbly, pink gel-pen writing is;

“What an unfortunate accident!” Gwen chuckles. Except, I think by the way she said it, it was no accident.

“Your dad is Norman Osborne, right? The renowned scientist?” Gwen asks. “If so at least we should get an A. Hopefully intelligence runs in the genes.”

“It doesn’t.” I say as the bell rings. Everyone stands up simultaneously. “But that doesn’t mean I’m not smart.”

“Good thing.” Gwen slips a couple folders and notebooks into a bag and heads towards the door.

“My friend, Michelle, told me we’d get along well.” Gwen says.

“Of course, she did.” I mutter to myself.

“Anyway, nice to meet you!” Gwen shouts from down the hall. When did she get down there? “See you at… house… at… o’clock!”

Gwen grins and waves at me before exiting the school.

“Who was that?” I turn to see Ned Leeds and Peter.

“Not really,” Peter says. “She’s the daughter of the police captain. She was at the station when Uncle Ben died. That’s how I know her.

“So, are you coming tonight or what?” Ned asks.

“I’ll try,” I say even though I know I’m not going to be doing anything else.

“’I’ll’ try is the best we can do, huh, Ned?” Peter shrugs while looking at Ned.

“Well, we’ll either see you tonight or tomorrow.” Ned says.

“Oh, you’re right!” Ned laughs. “Then you have to come tonight.”

“There’ll be pizza.” Peter says as Ned and him head towards the door of the school.

I wait a few moments before leaving, too.

I don’t bother telling my father I’ll be out late. If I don’t have school in the morning he won’t care. He probably won’t even realize I’m gone.

I rap on the door of the Parker’s apartment.

Flour- covered and crazy-haired Aunt Mae opens the door with a huge smile. She had such a beautiful smile. Sometimes I wonder what my mother’s smile looked like. Father never showed me pictures of her.

“Ned and Peter are in the ‘base’” She air-quotes the last bit with a laugh. “I’m finishing up on the pizza now.”

She’s already in the kitchen when the smoke alarm rings off. “How do the Italians do it?!” She shouts.

I walk into Peter’s room without knocking.

“Your aunt is going to burn the whole apartment complex down.” I chuckle.

Peter shakes his head. “The whole of Queens.”

“Maybe Brooklyn, too.” Ned puts in.

“So, we’ve gotten one-quarter of the way through.” Peter says. What a nerd.

“If you must.” Peter smiles at me.

I take a few moments to glace around his room. It’s a wreck. An awe-inspiring wreck. Clothes lay in heaps on the floor. His bed is unmade. Gadgets and gizmos galore are spread about. And what was with the excessive amounts of backpacks?

“Your room looks like a college dorm.” I say.

“Well, with the Stark internship…” Peter says. “It kind of is.”

“Doesn’t really sound like your type of thing.” I say.

“Well… it gets me credits.” Peter says. “And that’s what matters.

“Oh, right.” We look at each other for a few long moments and I feel an invisible threat between us.

What was he hiding?

“Pizza is ready, boys!” Mae calls. “And there’s somebody here for you guys!”

We all glance at each other before racing, stumbling, and groping the door handle. We clamber into the kitchen to see two additional people other than Aunt Mae.

“Aunt Mae?” Pete asks cautiously. “What are they doing here?”

“Way to go.” Ned says, only he’s serious and not sarcastic. Of course, he’d enjoy being around a bunch of girls.

“We brought the books, erasers, and pencils.” Gwen smiles. “I hope one of you has a sharpener.”

We all eat pizza and ice cream but for some reason something keeps bothering me. It wasn’t Gwen, either. I could sense something. Something dark. I’m staring at the bookshelf when I think I see a couple of the books shift. Black liquid seems to seep from below them.

It was probably just the greasy food and all the sugar.