A boy and his sailboat, what could go wrong? 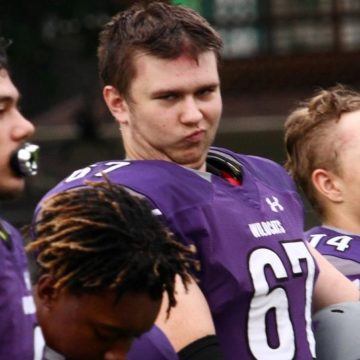 The moon was crystal-like and serene, providing much light to the cold world, its old scars from long past traced a silhouette on the calm waters. First traces of a long winter were starting to make themselves present – little flakes of snow gently falling onto the ground. However, Oliver paid no heed to this for he was sprinting, his little legs carrying himself as far as he could from home. He was not welcomed there anymore. He had no home now.

Thoughts of home kept echoing in his young mind. However, his ambition and determination kept him from beginning the long trek back home. Ready for the taste of adventure. He thought of the stories his dad had told him before he had passed away. Tristan was determined to see them through, to see their beauty and truth, and ultimately to find out the truth about his father. Forfeiting his scorning mother and irritating little sister to fend for themselves, he ran away from home, and that led him to where he was now. His body told him to go back, with the whispers of the cold, brisk wind gnawing at his ears and nose while ripping through his thin coat. But of course, this was in vain as he ignored these signs and continued his trek.

The frigid waters splashed up on the shore rigorously. He wasn’t quite sure where he was going, but he was going somewhere, and that was fine with him – and gave him a little tingle of excitement. He gazed at the jagged horizon over the sea filled with mountains and lands he had never explored nor set foot in. Eventually, he was far enough from home to feel confident that no one would come looking for him, he sighed a breath of relief and exhaustion, slowing his pace to stealthy prowl. The sound of the waves hiding the sounds of footfall. He dared not think of getting caught.

His journeys eventually led him to a humble dock. Old, rusty, and meek it was in stature, but it held what seemed to him an elegant ship; reminiscent of those pirate ships he had seen in those novels his father used to read to him, but in actuality, it was an old and worn sailboat. It had an engraving on it, which he assumed was the name. It spelled the name Odyssey, in strangely familiar handwriting. Without a moment to waste, he hopped on the ship and ran to what he assumed was the helm. The sight of it warmed his frozen body. He found new clothes (which were both warm and waterproof) inside the sailboat and immediately put them on.

He put his unsteady hands upon the helm and almost immediately he was off. He stared in awe as the sailboat seemed to do most of the work herself! Lines flew about like they were being handled by a crew of invisible spirits. The boy was shocked and accidentally jerked the wheel left a little too hard and almost sent the ship into an ice sheet before he steadied himself, breathing a sigh of relief. He looked bravely upon the mountainous horizon from across the sea as he moved steadily towards it. He was ready for his adventure.

As he rode farther from shore, he felt the calmness in his heart. He looked out at the sea and found that it too was calm, there seemed to be no waves in the water save for the wake of the little sailboat. The sea was filled with the deep blue hue of the night sky, and was so still the boy could see all the little constellations glimmer as they reflected off the water. It was truly gorgeous and memorized Oliver, he let go of the helm and peered down into the cosmos that were displayed on the surface of the frozen depths. Fifteen minutes passed and he had mapped at least three constellations: Ursa Minor, Perseus, and Ursa Major. He would have tried to find more in water but it occurred to him he had left the helm unattended. He frantically looked up to find the helm was moving on its own, guided by unseen forces like the rest of the ship. He sighed and laughed at himself for acting so foolishly. Since his duty was shirked, he took this as an opportunity to explore the cabin of the vessel. Underneath he found a kitchen filled with canned food, and a bedroom as well. The bed was tucked in, but it was riddled with dust and holes; he decided against using it. He sighed realizing that sleep had to wait and looked up through the window. His heart sank. A storm was brewing ahead.

Vicious waves tossed the sturdy vessel; tempting the boat to give into the ceaseless entropy of the ocean. But it did not. It had a passenger to see to their destination, and it did not want to disappoint. Although the ship did not break, it couldn’t prevent the frigid waters from splashing in. The endless waves struck Oliver, his face and hands were numb from the torment the sea dished out. The sea attempted to persuade him into turning his shoulder on this endeavor, but he bent not to its will. He pressed onward into the night. Hours came and gone and no sight of shore, our young hero was fearing he might not make the trip.

Darker clouds overtook the sky, an ominous sign of what will soon be. The relentless waves then turned into what only could be described as madness. The icy waters transformed into a hideous gray as the ship was tossed to and fro. A gripping terror overtook the young adventurer as he struggled to stay on the ship. His life was in peril. The ropes were being pulled frantically as the vessel tried to keep itself together. Then an ice floe hit the vessel on the side sending it lurching to the right heavily. Oliver screamed. He tried frantically to keep himself on the boat but to no avail. But by sheer luck, his hand caught on a board protruding from the ship – which is curious, for it had not been there before – his hand grasped it and he jolted to a halt, a sharp pain raced through his body. The poor boy was hanging on for dear life. Thirty seconds passed and his arm grew tired; the bitter, nasty cold stinging his hand; the frigid waves hitting him over, over and over. He grew tired. His strength was failing him. He was going to die. Feeling his hands slipping, he accepted his fate and he let go.

He waited for the water to swallow him up, but it did not. He held still for what seemed like an eternity, but nothing happened. Feeling was slowly coming back to his arm and he felt a hand holding him up by his wrist. Opening his eyes, he saw the deck below him, the hand released him. Looking up, he wanted to thank this savior, but no one was there; this being simply vanished into thin air. He rose shakingly and took the helm once more. He held onto the helm with knuckles white until the storm was subdued in defeat. The sea soon grew calmer and he was still alive. Emotions swept over him: joy, relief, gratefulness, but mostly fatigue. He stumbled into the cabin of the ship where he found the old bed to lay his weary head on. Without any hesitation, he took off his frigid, wet clothes and fell into a hasty, deep sleep.

Morning quickly rose and Oliver woke with new-found energy. He ran over to his clothes and miraculously they were warm and dry to the touch. With no hesitation, he put them on and ran up to the deck to find the sun rising gently on the horizon. No longer did it feel like winter, he felt a clear warmth. Spring had come early. The sea also reflected this newfound calmness, for the waters were calm and still; with only little waves scattered about the deep blue ocean. Not taking this for granted, he inspected the ship for damage. Nothing significant; just wear and tear, and a lot of it. The ship seemed to take care of itself, but it didn’t seem keen on letting the boy off with nothing to do. He got to work sanding and repairing the ship. Just as his father had done before. Midday came and he finished his little project. The ship looked far better than how it was at the dock. About an hour later, he saw land on the horizon. It was there, but just almost out of view. He decided it would take the remainder of the day to reach it. His arm grew increasingly sore and hurt; so a rest was much-needed to help mend it. He went below and found some old books, and then holed up and read until he was ashore.

At approximately midnight the ship reached shore. He quickly went above to find a port already there. He hopped off and ran to the beach. He sat there for a moment, taking in the victory of making it. He then wondered about how his mother and sibling was doing, feeling a pang of regret for leaving. He shrugged it and made his way to the edge of the forest. Though, something was off. He felt watched; the forest seemed alive. Moving towards it, the mysterious nature of it was enticing his mind. As if on cue, a wooden hand grabbed hold of him and dragged him into the forest…