Her absent father is nowhere to be found - she's now left to deal with demons who prey on those with imaginations, knowing no one will believe them. Now if only she can escape the house and make it out mostly sane... 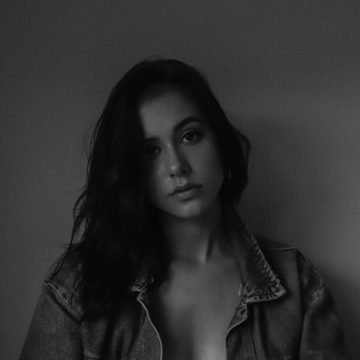 I told the ghosts I was home, then slumped into bed with a tired moan.

A sudden downpour hits the metal roof, breaking the silence. A gentle smile creeps across my face at the sound. With what strength I have, I pull myself from my bed and walk down the hall. A pale grey sky is slowly descending into the darkness.

The monsters will be waking soon, if not already. The full moon always seems to throw off their schedule, sightings becoming more unpredictable and erratic. Crazed. Hungry. Definitely hungry.

Its been 36 days since I arrived at this hell of a mansion. Too large and too dark. Too many rooms I dare not peek into and too many noises in the night. Both from within and from the forest surrounding it. 36 days, that I know of, since my father disappeared. Probably claimed by some creature most people don’t believe in. Why would they. They’re all merely fictional nightmares, right? They had wanted him. Not like they wanted the others who believed. My father was a different sort and they could sense it. I still felt angry at him for leaving nothing more than a half-eaten sandwich and notebooks full of nonsense for me when I arrived. That day had been gloomy too, and every day since. The sun didn’t often shine in this small part of the world. When it did, it seemed harsh and unnatural. The taxi driver dropped me off near the front steps that day. I wandered the house, the yards. The dad who was supposed to be waiting to greet me was nowhere in sight. I had questioned whether it was the correct address, but the house was littered with signs of him. Books on every inch of space, nothing but pasta and sandwiches saved in the refrigerator, and our faithful cat Norman wandering around the living room. There was one precarious bar of service on my phone. Of all the f*****g places to move to. This was so very like him. He moved every 17 months. Each time, a little more remote, a little farther from civilization. I never knew why it was 17 months – I kept meaning to ask.

I hadn’t seen one until the third day. When I tucked Norman under my arm and took a walk through the woods. I wasn’t quite alarmed by the lack of appearance by my dad, this was common for him. I could remember the weeks of my youth when he would disappear entirely unexplained. It wasn’t until my mother left us and disappeared in her own way that he stopped.

Everything had been too quiet. I could feel the breeze but could not hear it. The crows had been in a sudden frenzy, dashing themselves through the trees in a way that could be described as purely suicidal. A chill prickled my spine, working its way across my arms. A dark wavering mass drifting through the spaces between the trees, black as coal, an indecisive smoke dancing around it. When I blinked, the shape had become that of a horse. Still the color of death but oh so lovely. At some point, Norman had leapt from my arms and bounded towards the house. He is so much cleverer than me. I felt the inexplainable tug at my body, to approach, to greet this dark stallion. My hands reached for it. For a split moment, I seemed to know something was wrong. It startled the creature and it changed. It became something evil, not quite wolf… jagged teeth, ink like eyes, dripping into the forest floor, a haze tracing its body as it stared through me.

I think I screamed. If I didn’t, I should have. It didn’t chase me. I tripped twice, clumsily crawling my way up the porch stairs through the door. It took twelve failed attempts to call the police and my frantic screeching only resulting in chuckles from the officer. City gal, I heard him say. Someone else muttered incoherently about coyotes and stray dogs.

I hadn’t slept that night. Doors and windows bolted. My shaking body huddled in the corner of the living room, white knuckles clutching a butcher knife I’d found in the kitchen.

It took me a week to find the book with the strange symbols. A week and one day to realize those symbols were drawn across the house, in every corner and every entrance. A sort of spell, it read, that doesn’t allow them to enter the building without permission.

It took me two weeks to learn that they, whatever they are, are only aggressive if approached with a butcher knife. That same week they seemed to realize I would not be leaving my fortress and began finding other ways to lure me into the woods. A midnight kitten howling in a tree, desperate for help. A puppy sitting on my doorstep with sad, begging eyes (I did almost fall for this one). Then they became human-like. Wobbly sort of humans dressed in sad black attire, knocking on my door, asking for help in an unsure voice as if words were new to them. These were the most unsettling. I’ll see them watching me from the windows, blank expressions, pleading with me to follow them into the depths. I tore a few sets of bedding up and hung them as curtains.

Its been 36 days. I’ve gone through nearly every item of canned food that had been stockpiled in dad’s pantry. The house speaks in indistinct whispers, mostly when it rains, the ghosts of previous occupants. Dad’s car in the driveway won’t start, gas teetering into the red.

Any normal human would have managed to leave by now.