La Tomatina is a Festival in Spain that is celebrated by throwing tomatoes. People gather from across the world to participate. Local Valentina runs into a problem, literally, when she knocks down a handsome young American and has to deal with the language barrier. 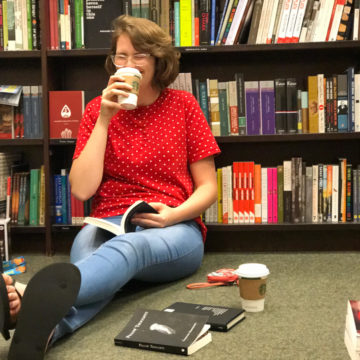 A tomato sprayed across Valentina’s face, cardinal red juices smearing like war paint across her skin. She hadn’t expected it to hurt as much as it did and the pain stunned her for a moment. In her daze, everything around her slowed, a everything to her played out in a slow-motion-action-movie type scene. In reality, bodies bumped and pushed, jostling her around as she wiped the flesh and seeds from her eyes.

The streets of Bunol, Spain were flooded in thousands of crushed tomatoes, running down the road in a knee-high river. Today was La Tomatina, the day of tomato fights and the ruckus of the festival was in full swing. The street burst with people from every corner of the world. Languages mixed in the air. One distinct sound drowned out everything and that was laughter. No matter the dialect, the culture, the race, everyone faces ached from grinning.

Valentina picked up a semi-smashed piece of tomato and threw it with all her might. She watched it leave her hand and arc through the air until it splattered across her friend’s back. The fruit was as red as a ruby and felt twice as hard on impact. Valentina grinned as her friend swung around, hands on hips to stare at her . Red smeared down her linen shirt and pants. Her friend jokingly frowned as juice dripped from the tip of her pulled up hair.

“I thought we were on the same side, Val.”

“There are no sides, Alma.” Valentina laughed, scooping up an armful of slaughtered tomatoes and embracing her. Valentina could feel the wetness of the destroyed tomatoes seep through her clothing, its coolness in the heat of August brought goosebumps to her arms.

Alma shrieked with laughter and crushed a tomato into Valentina’s hair. She pulled away from Alma, splashing as she tried to escape her friend’s grasp. She had only made it a few feet before she looked over her shoulder to see Alma chasing after her, tomato in each hand and a cunning grin on her face. Valentina giggling, stumbled, but the road beneath her was slippery and she began to collapse. She reached out instinctively to grab someone’s arm to save herself.

The ocean of tomato enveloped Valentina, the screams and laughter of people washed away as her head hit the ground. A heavy weight pressed on her chest, the person she pulled down was struggling above her to regain their balance. Finally, hands gripped Valentina and pulled her up. She spluttered and coughed.

“Are you okay?” a young american man stared down at her, his spanish broken as he struggled to remember what little he had learned in high school. He smeared liquid across his face as he pushed the falling curls backward off his forehead. His hair was soaked through with juices and flecks of red skin clung to the slicked back strands. Shadowing his dark coffee eyes were strong eyebrows that were drawn together in a worried look.

Valentina nodded. The young man’s eyes shifted and he began to move as if to stand. She offered her hand to him, “Valentina.”

He smiled and took her hand, “James.”

The pronunciation of his name startled her, the hardness of the “J” seemed aggressive compared to the softness of how Valentina would have said it. The marching articulation of his accent was too stiff for the salsa that was spanish.

Valentina struggled with what to say next, she didn’t want the interaction to end, but her English wasn’t up to par and obviously neither was his Spanish. Luckily, before the awkward exchange of silence went on for much longer, a tomato sailed through the air knocking the American backwards. He let out a laugh, it was strong, one that turned heads in the school yards and made you wonder if you could ever laugh that passionately.

She got to her feet and gestured to James to follow suit. When he stood, he wiped his stained hands on his already stained jeans in a futile effort to clean them. Valentina handed him a tomato. With a shhh and a wink, she pointed at Alma whose back was to the pair. A grin broke out on the American’s face. Without a word they ambushed Alma. The two leaned on each other cackling as Alma stared disapprovingly. Valentina couldn’t help but smile and marvel at how interesting it is that some connections know no language boundary.