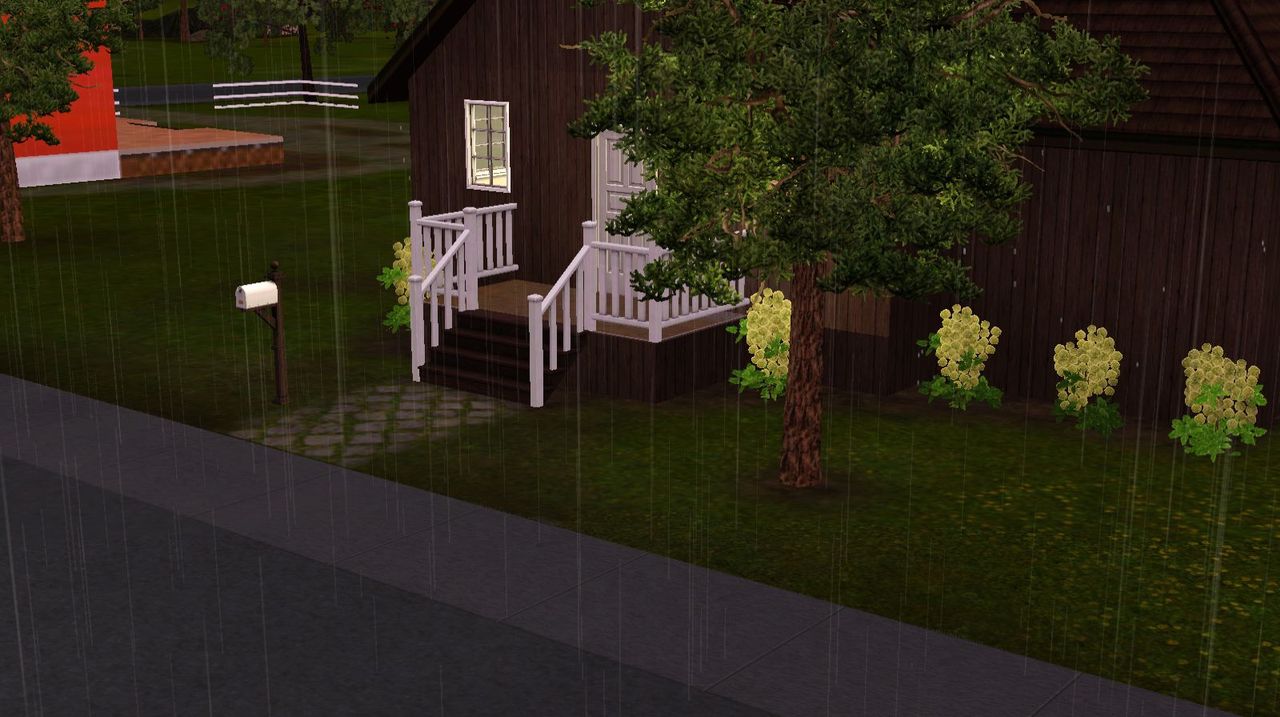 I would have thought that my art teacher had lived in some dark gothic castle with majestic sculptures of dragons or gargoyles hidden up on a far off mountain. In reality Ms. Hollins lived in a simple, small wooden cabin in the far end of town. The outside was a stained dark wood with a white railing, windows, and door.

Her home was just as simple looking on the inside as it was on the outside. The walls were yellow with a tanish tint and a light wooden floorboard which matched the inside doors and floor. It was only a three room house with the living room and kitchen divided slightly with a half wall. She had a small bookshelf, a painting easel, a loveseat with a matching chair, tiny old school TV, and tiny fireplace which was the only heating source in the living room section of her home. A dark brown table with matching chairs was placed in the middle between the kitchen and the living room. The kitchen had nice wooden counters with custom hand painted vines on the doors but the appliances were clearly outdated and barely worked. Her bathroom had matching blue and white tiles on the wall and floor. Like the kitchen, the bathroom appliances were old and outdated. The shower did however have a newly installed glass wall. Her bedroom shared the same hardwood floor as the other room but her wall had an off white color where the wall in the other room had had a yellowish tan. She had a dark brown dresser and matching nightstand along with two twin sized beds pushed together to make one large one. The only thing that really seemed to scream “goth” were her beds and some bushes with purple flowers growing in her backyard. 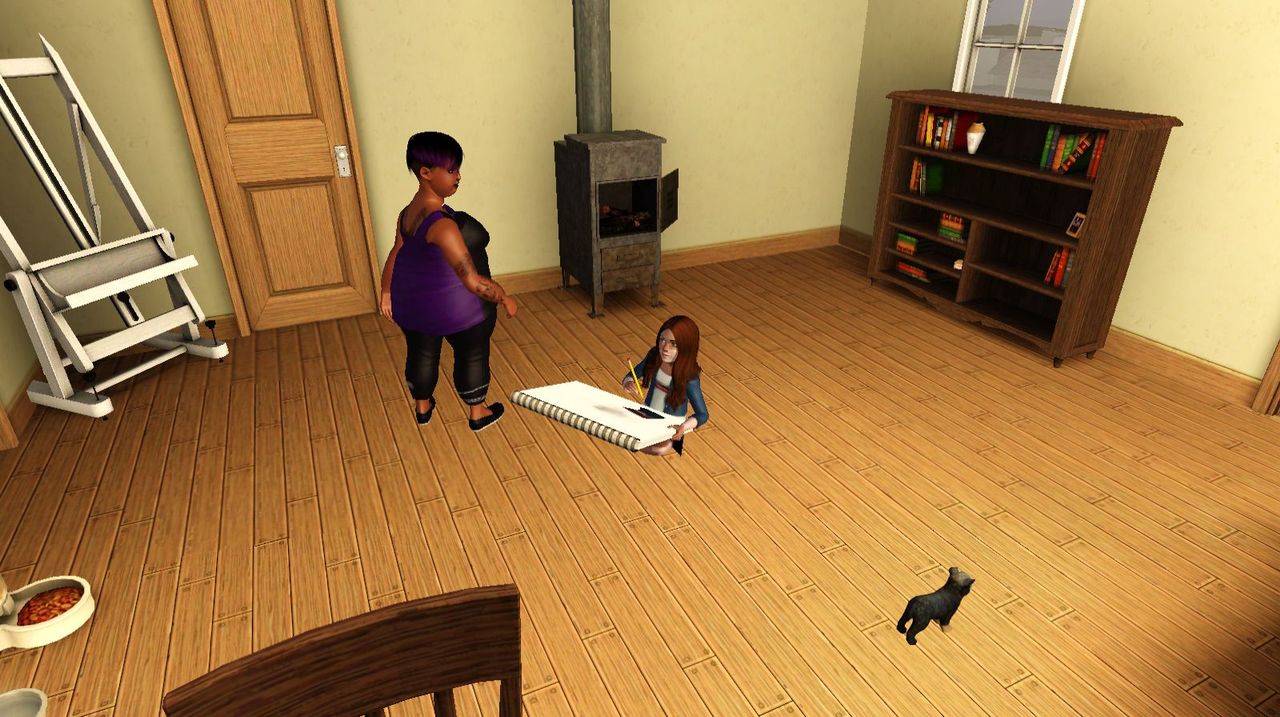 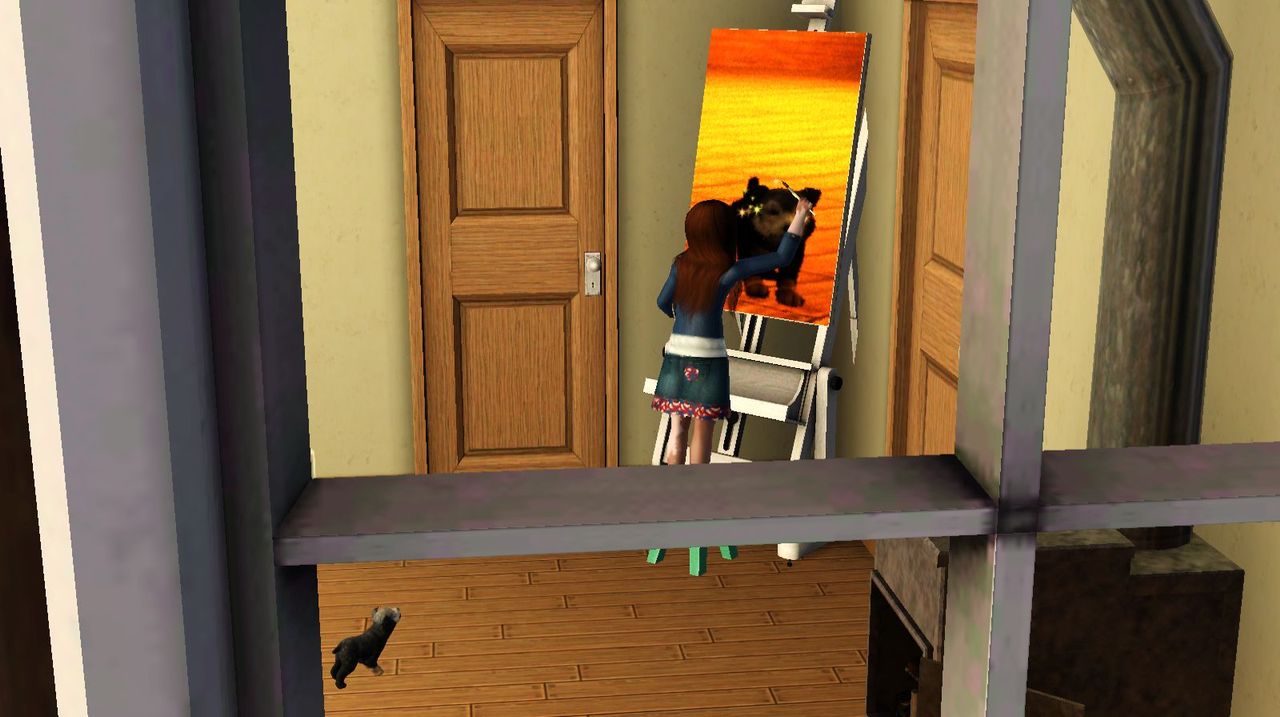 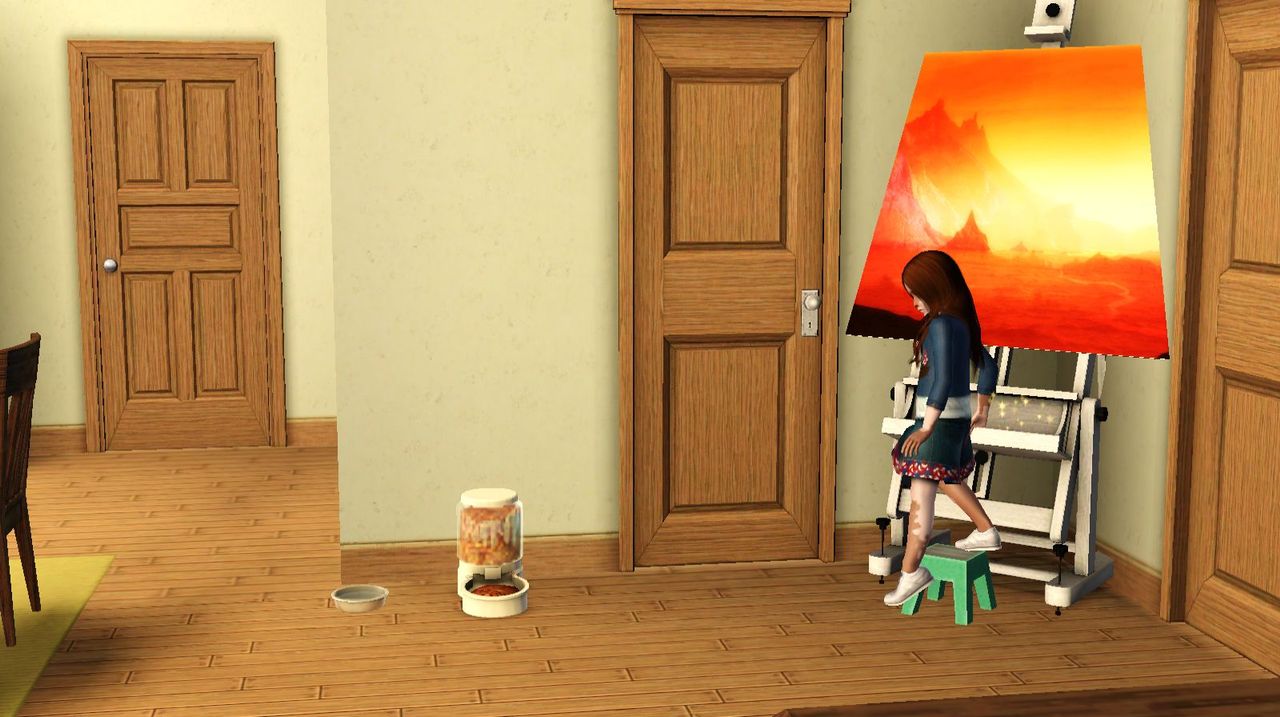 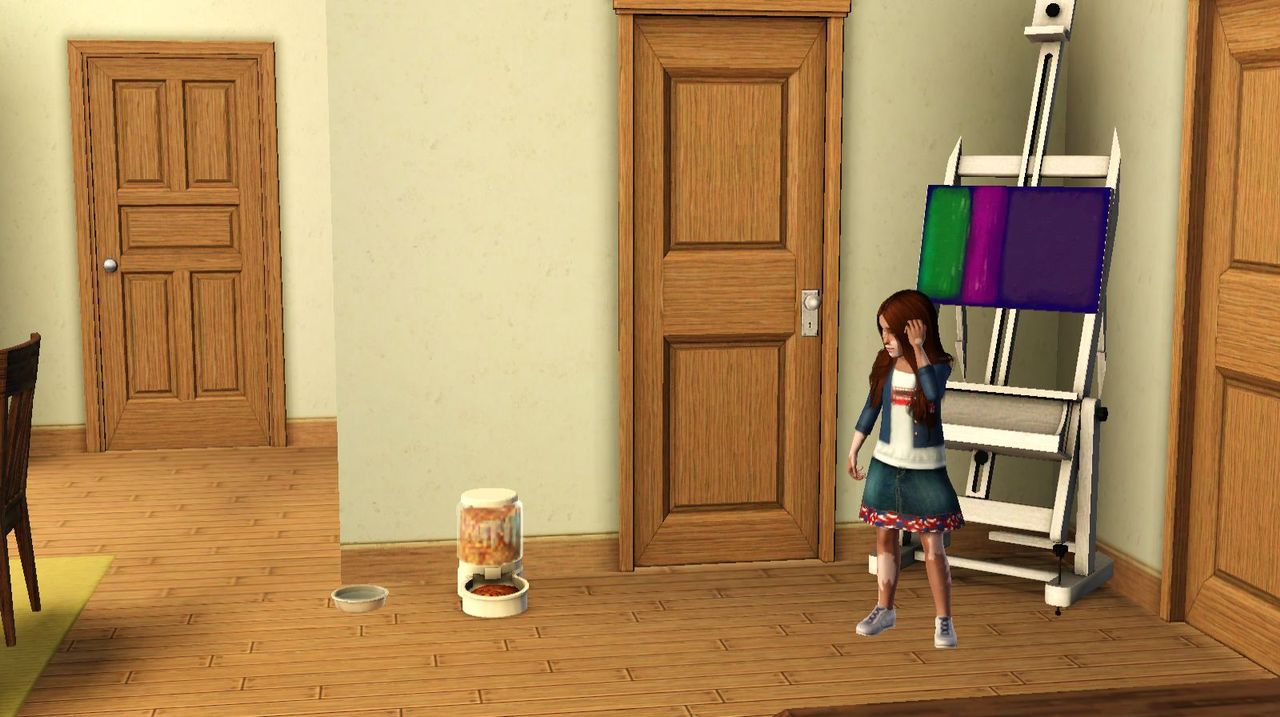 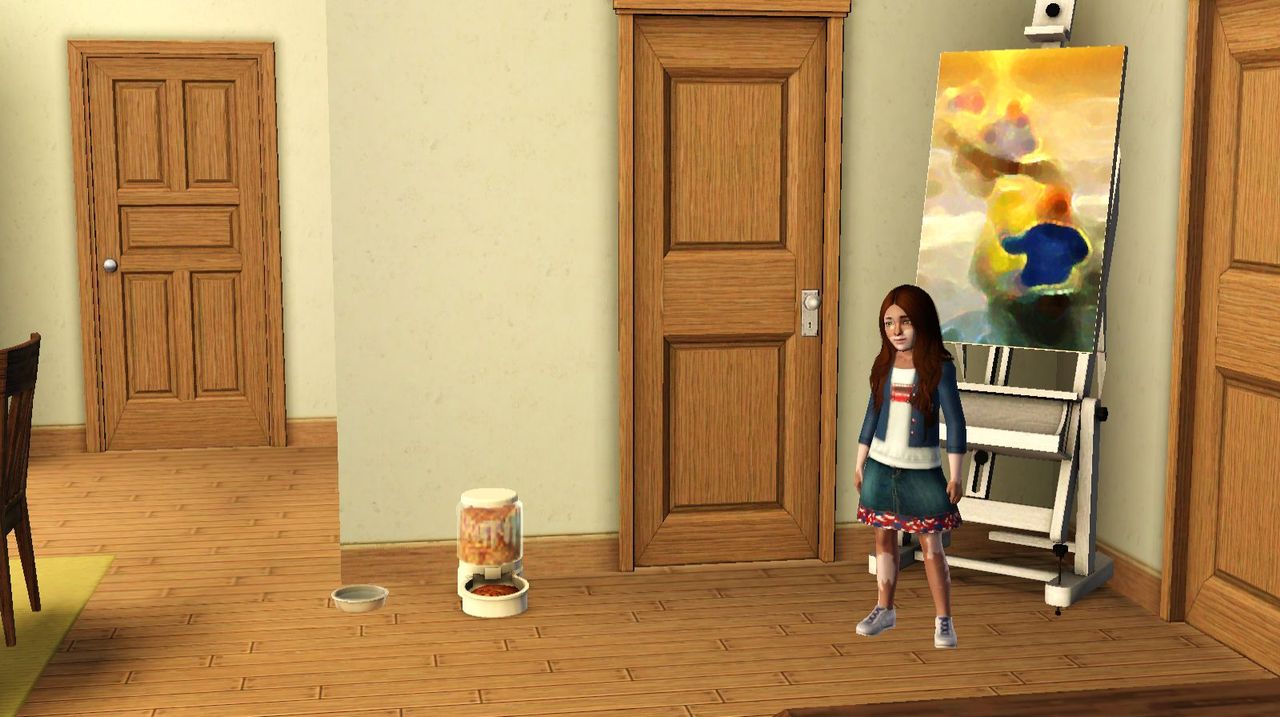 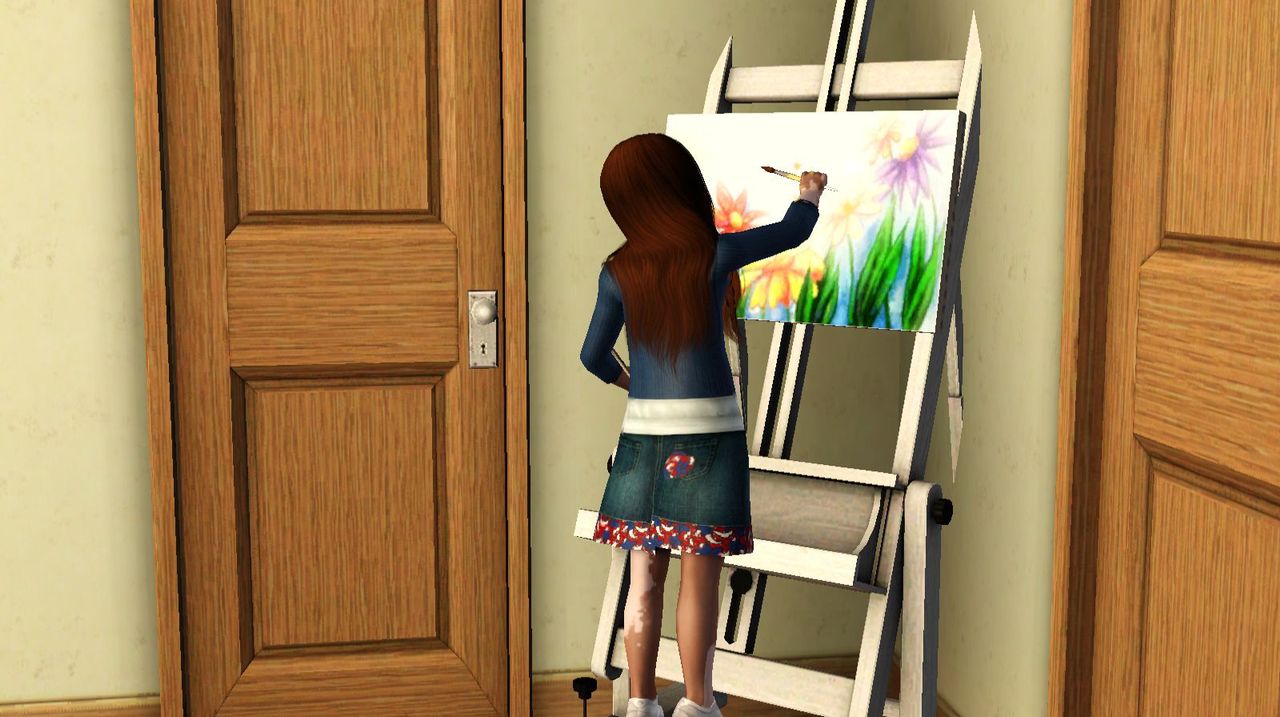 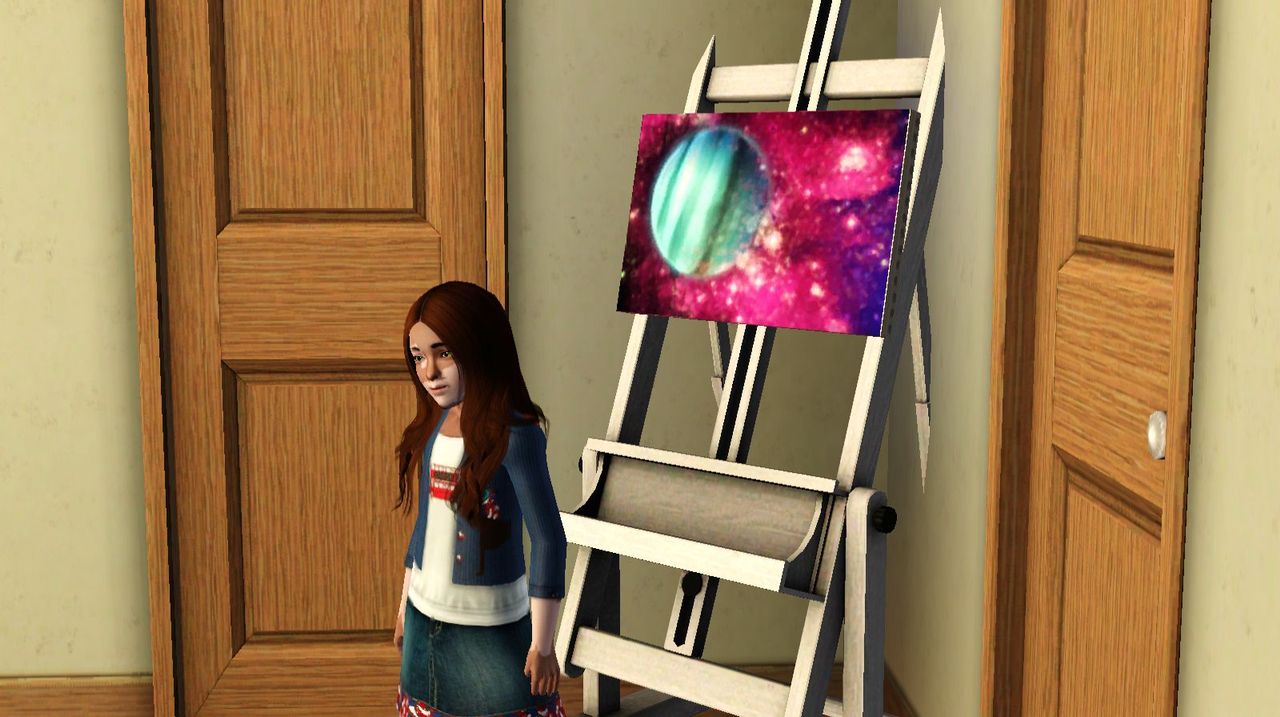 I kept myself busy honing my painting skills even more. I practiced everyday after school once my homework was complete with Ms. Hollins there to provide tips and constructive criticism.

It was nice to have a place to escape after dealing with a long day of bullying from my classmates. The bullying had only gotten worst since the Clarks were arrested. Rumors spread that I had hurt Evan. My teacher, Miss Kemp did little to aid me when my classmates started to tease me. 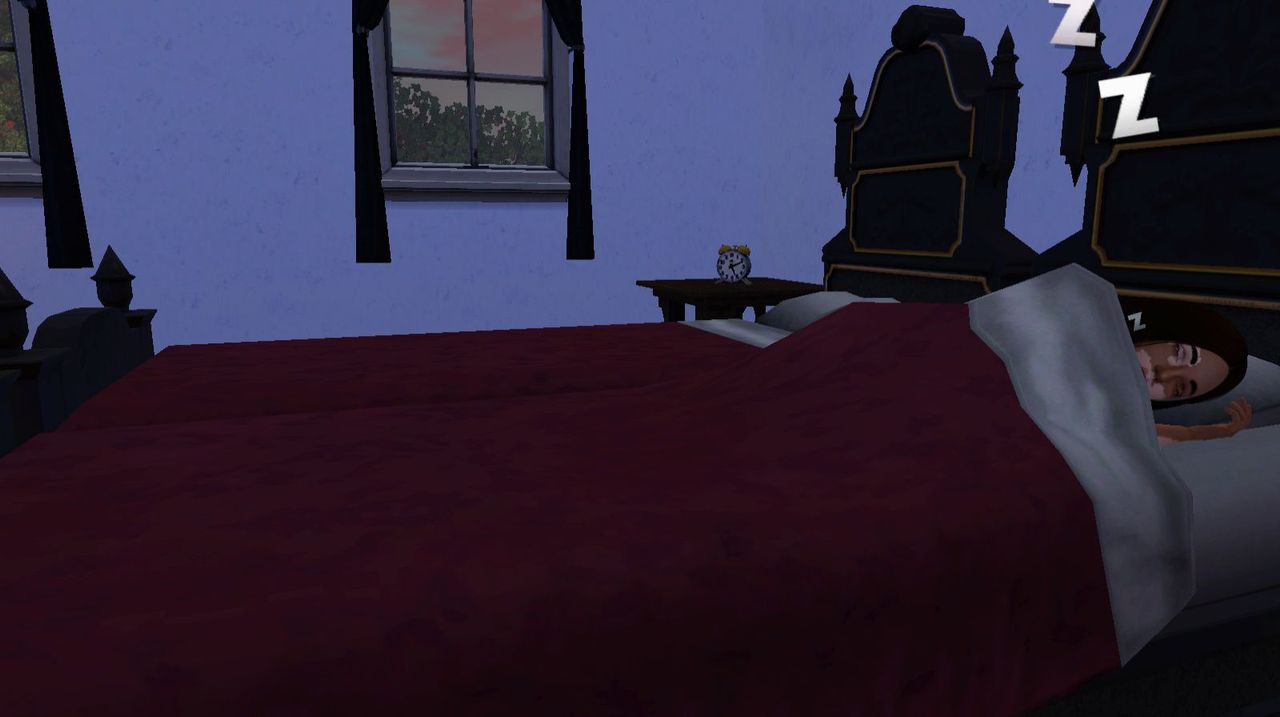 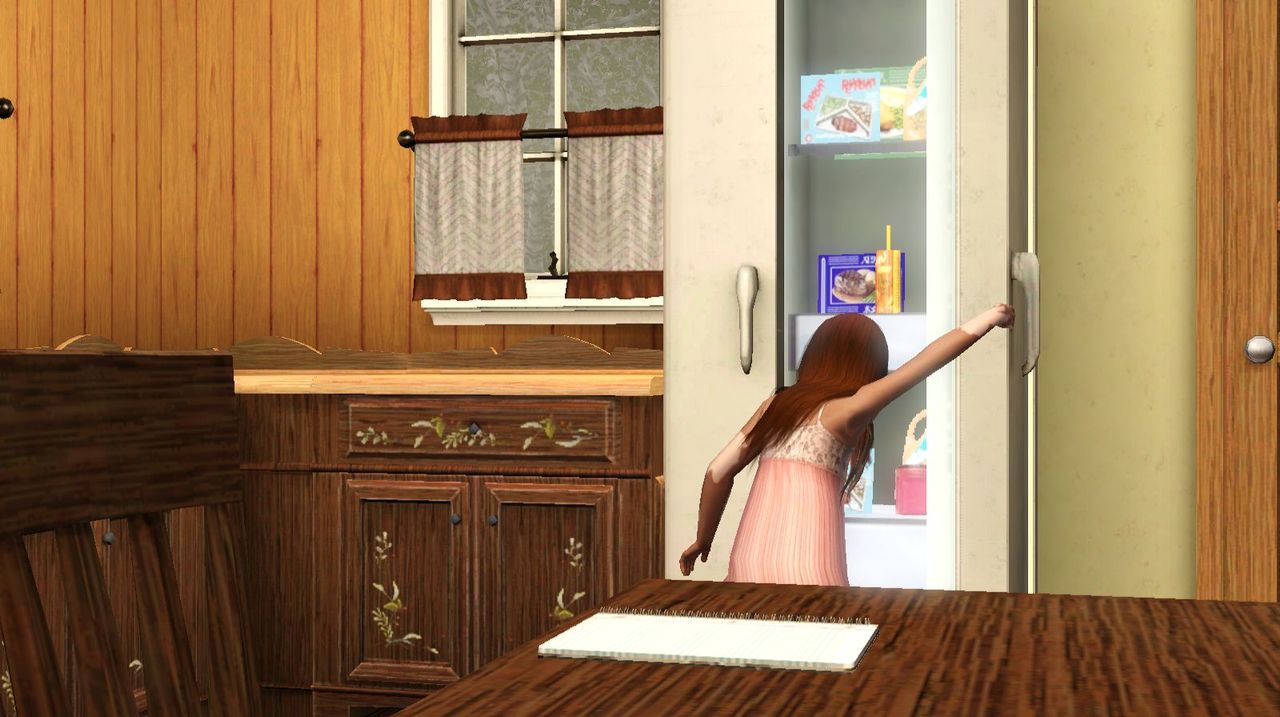 Late one early summer night, right before the end of the school year I woke up and found myself alone in the bedroom. My stomach growled so I ventured into the other room for a midnight snack. Ms. Hollins was no where to be found.

Panic set in when I had finished eating and she had still not appeared. I checked the bathroom first finding the lights were turned off. The bedroom was still empty. Maybe she had went outside for air, I decided on. I didn’t even bother to put on a coat or shoes. 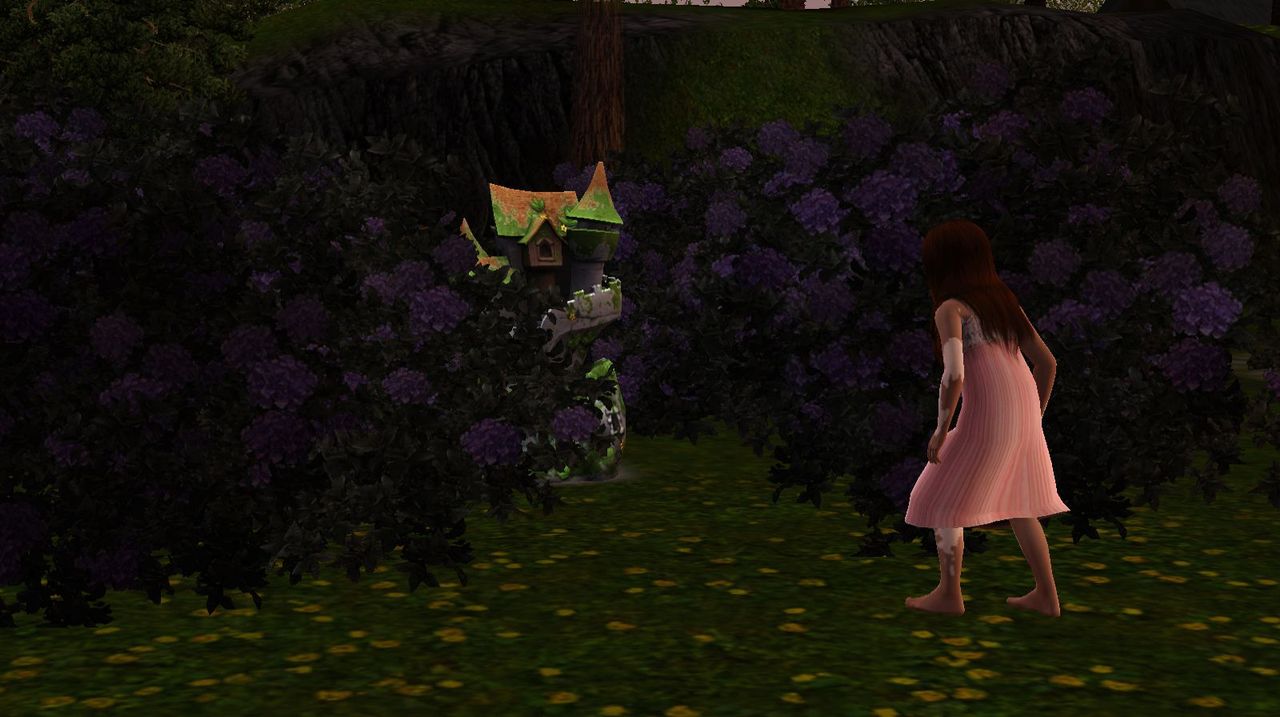 The air was warm with just a bit of a chill. I felt content in my knee length pink nightgown. Ms. Hollins was still no where to be found. My heart began to beat faster and drowned out the sound of the owl hooting in the distance. It raced faster than the leaves through the trees. I am alone. The dark reality seemed to be settling in. I’ve been abandoned again by someone I trust. Not a great thought a five year old should be having.

A strange chant broke through my thoughts. It began as a whisper and grew in both volume and intensity. It was all around me and I felt this strange pull towards whatever it was. But where was it? It seemed to be everywhere. I felt like I was being pulled by hands that I could not see towards the bushes with the purple flowers. The ground began to buzz the closer I came to the tiny stone castle. A ladder had been placed down a small, almost non visable hole in the ground. 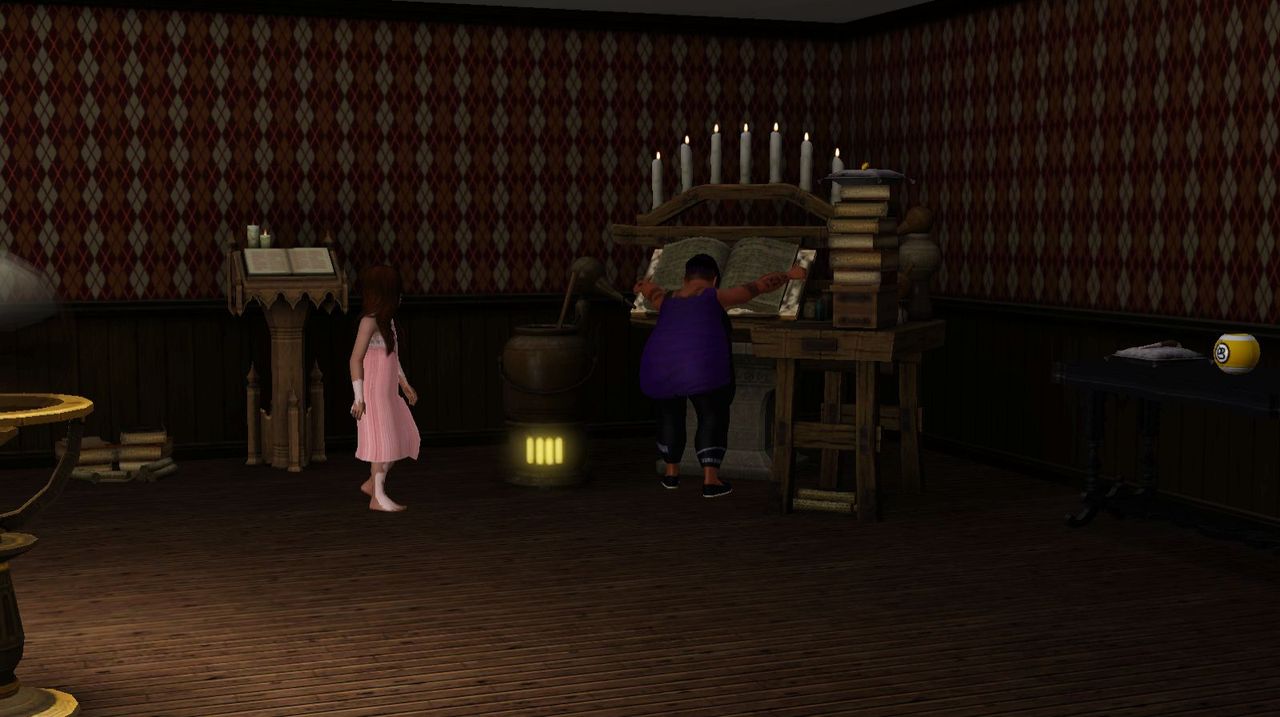 I found my art teacher down there. The room was lit with some candles but the main light source was an orb displaying the current moon phase. Ms. Hollins’ face was buried in a book placed on a stand by a large pot.

“Ms. Hollins?” My voice shook. Should I be down here?

Her back stiffened and she whipped around in surprise at my sudden appearance. “I thought you were asleep” was all she could muster to say.

“I was hungry.” I looked around the room. There were books scattered all over the room in unorganized piles. On the far end of the room there was a table with bottles with unknown contents and a coat rack with a broomstick hanging on it. “And I couldn’t find you.”

“It isn’t safe for you down here.”

“I’m sorry,” I looked away from her, fearful I had lost the trust of the only person I had left, “I felt something like a hand pulling me towards the ladder.”

Her eyes widened, “Did you now?” She rubbed her chin a few times, looking at me. “Alright, tomorrow I want to show you something, but for now go back to bed. I will be up in a bit.”

Curiosity burned through me that night. My mind raced with the images of the hidden room. Sleep seemed just about impossible that night. 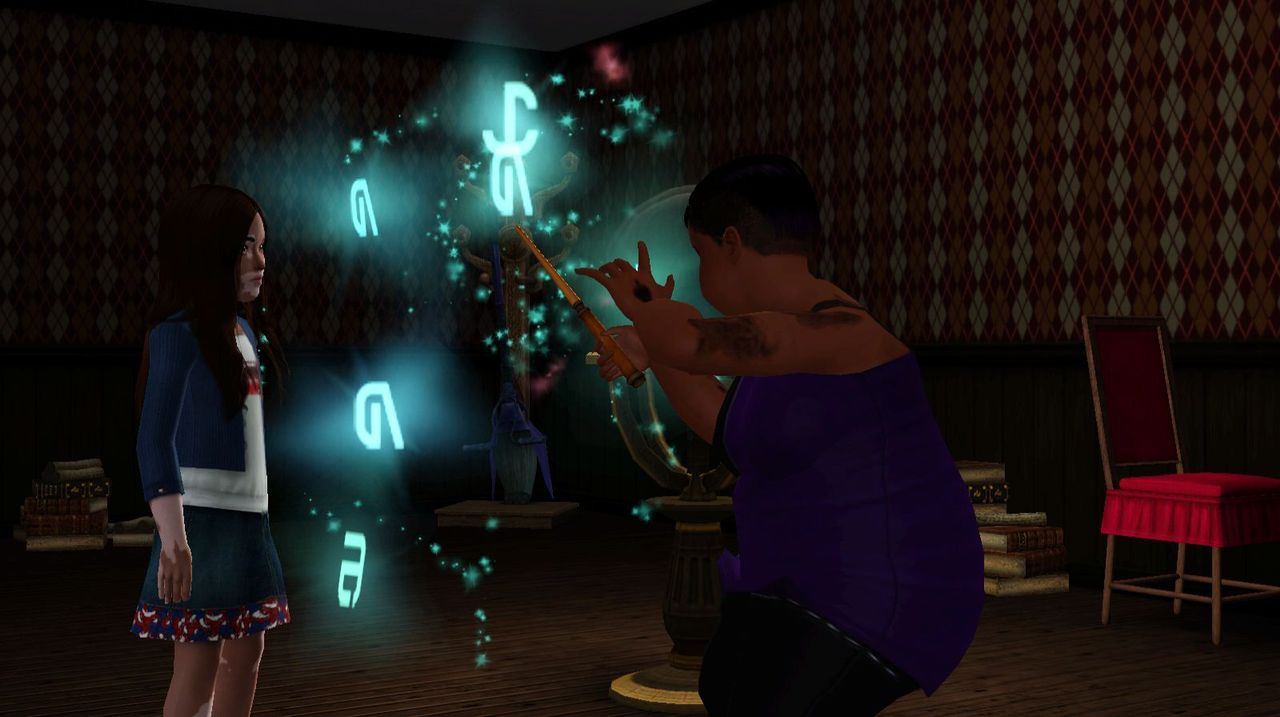 “What I am about to show you, you must not tell anyone else.” Ms. Hollins began the following day after school. I nodded before she continued, “I am a witch, Keria. I can practice magick. I think… you are a witch too.”

She pulled out a wand from her pocket and began to speak another launguage while moving the wand through the air. Light and strange symbols appeared out of thin air where the wand had just been.

I stared in awe. It was so beautiful. “How do you do that?”

“I learned most of what I know from my mother, she was also a witch.” She gestured towards the books scattered about, “Most spells you can find in one of those books.” 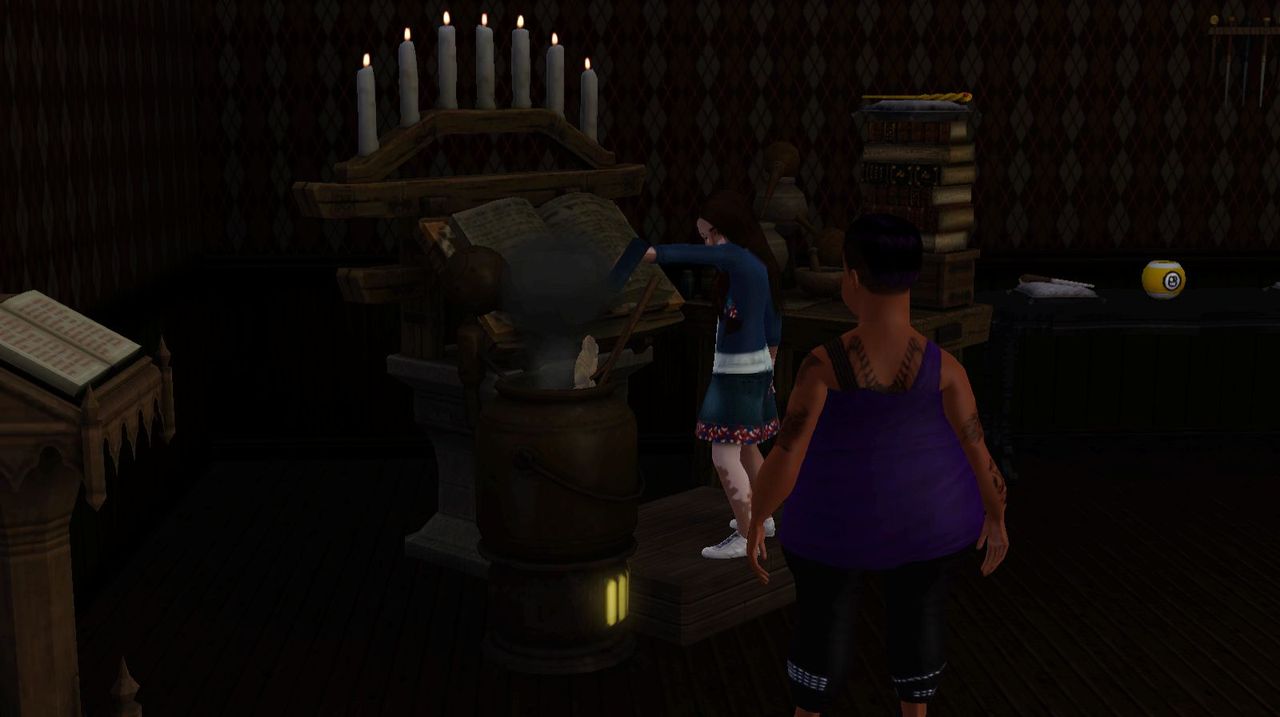 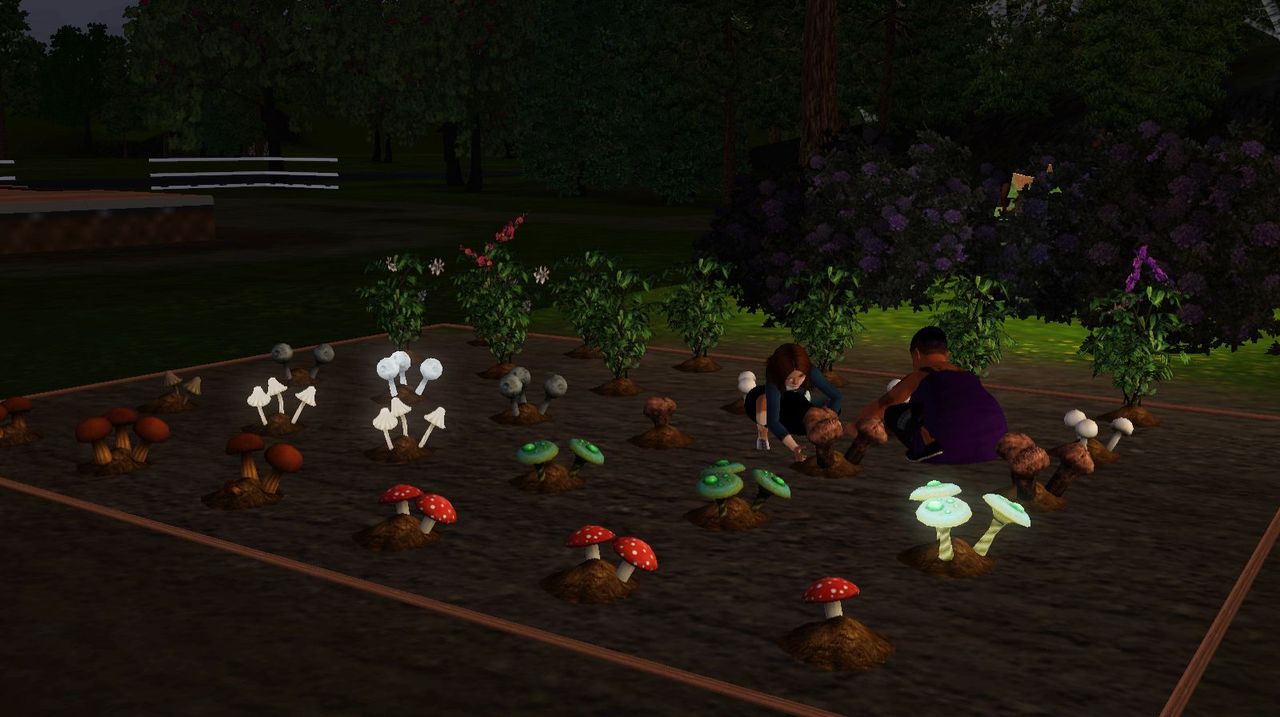 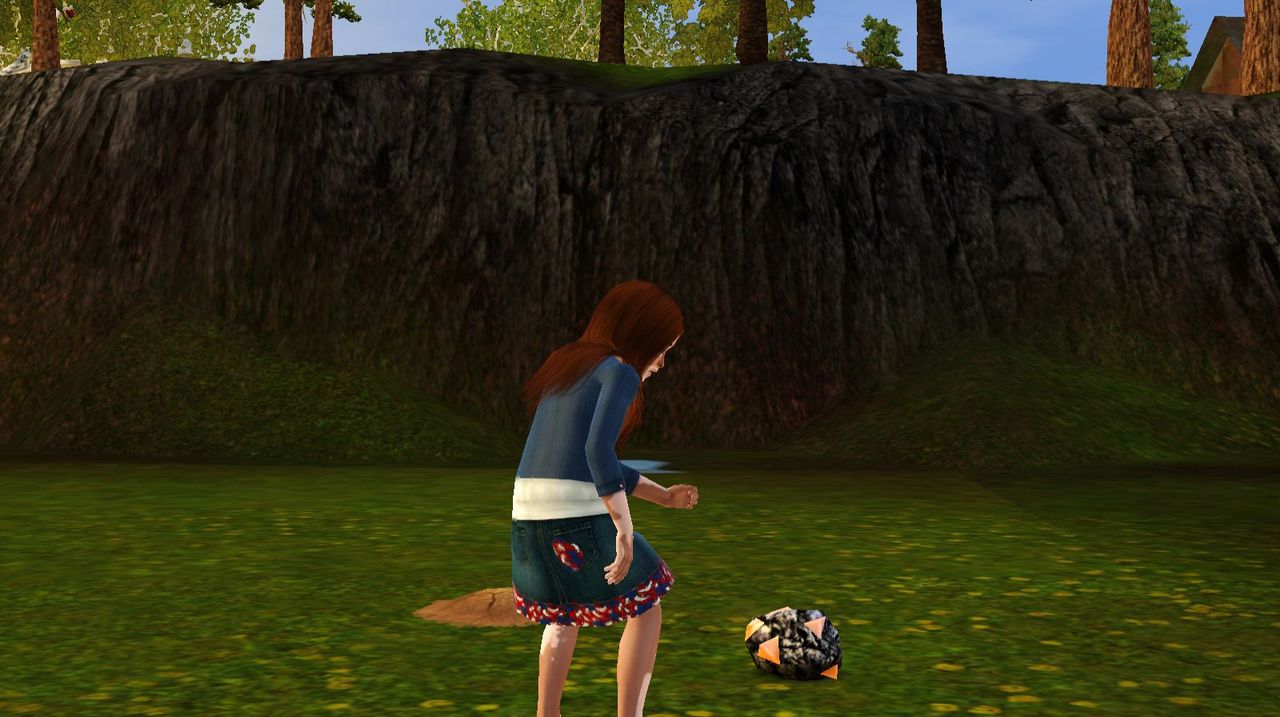 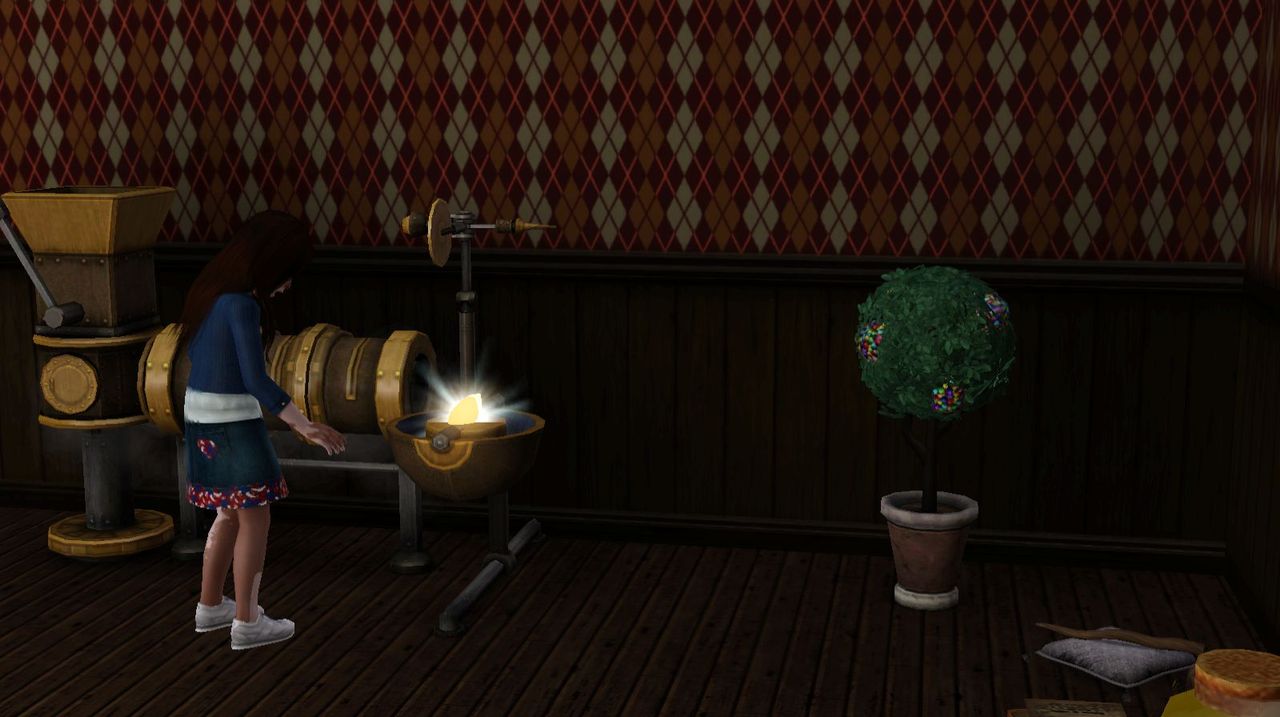 I spent the last of my summer at Ms. Hollins learning all I could about magick. We spent our days tending her her herb garden, drying out the harvested herbs to ground into powder, catching bugs, and digging for gems. The nights were spent reading spells books, practicing wand motions, and learning how to mix potions. 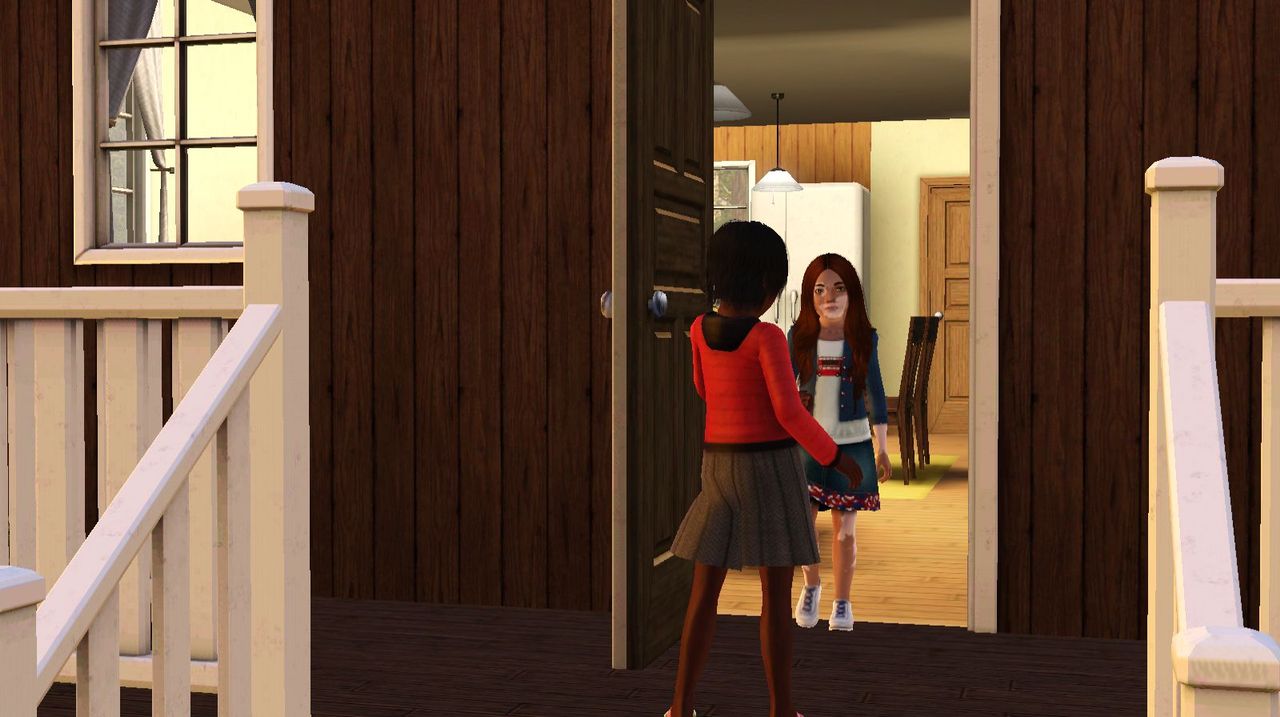 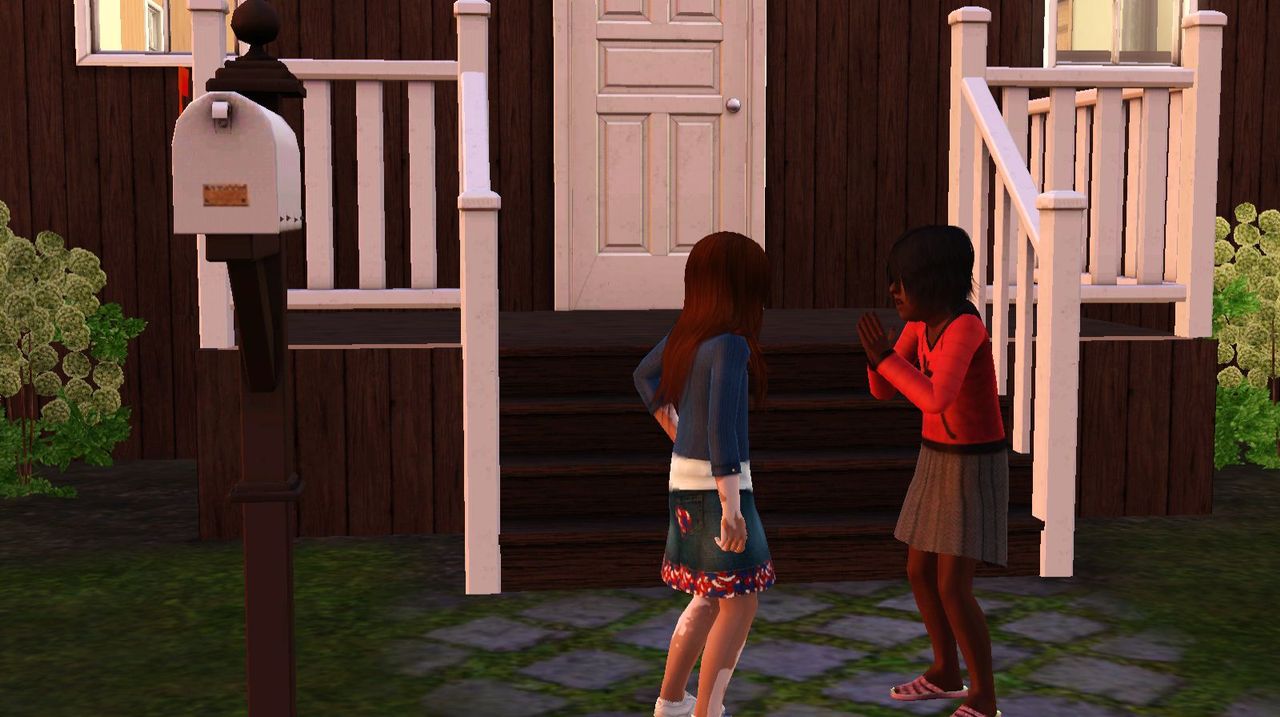 I was in the bedroom packing what belongings I had. Today was the day I was to move into my new foster home. I hadn’t met them yet but I was told they had a lot of money and lived in a nice house. There was a knock on the door early that morning. It’s too early for them to be here! The caseworker wasn’t supposed to get me until later in the afternoon.

Saying I was surprised to see Carolina there was an understatement. But there she was. “Can we talk?” Her eyes were red and puffy.

For a moment I thought of closing the door in her face but thought better of it. She had been my first friend here and even though she deserted me for a boy I couldn’t bring myself to turning her away. “What did you want to talk about?”

“Please forgive me,” tears ran from her eyes faster than she could wipe them away, “Noel broke up with me right after summer vacation started. I wanted to talk to you all summer but I had no idea where Ms. Hollins lived. And I didn’t know her phone number.”

So because Noel was gone, suddenly I was good enough to be your friend again? I wanted to say. Instead I stayed silent.

“I know how I treated you was unforgivable. You were my friend and I treated you like garbage.” she blew her nose into her sleeve, “I am sorry. And I will miss you.”

I could have said no. I could have insulted her and made her feel as she and the others did. But how could I do that? What would that accomplish? I was about to leave and probably would never see her again. Even at a young age I knew it was better than forgive and forget than carry hatred in your heart. “I forgive you.”