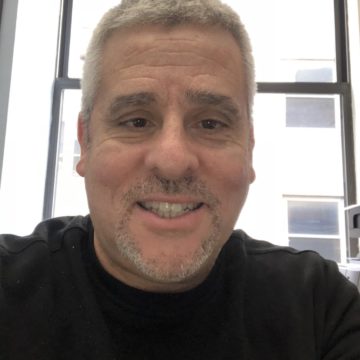 It was the last place I expected to be — sitting in a gynecologist’s exam room. Like most guys, I’m not typically in the habit of accompanying my better half to her OB/GYN appointments, but my attendance was requested. Now if you have a mental image of me sprawled over an exam table with my feet in stirrups, you’re gonna be disappointed — this was about family planning.

Esther and I talked about having kids long before we were engaged, but agreed to wait until after we were married before starting a family. Three months into our engagement, I was 45 and Esther was 37, older than the average couple planning their first child. Today’s appointment was to see if it was possible.

When Claudia, Esther’s GYN, arrived we started off with some small talk, discussing wedding plans and baby names, while she evaluated the engagement ring. Putting her jeweler’s loupe away , the conversation turned to me.

To Claudia and several others, I was an oddity. Maybe so, but I’m speaking from a medical perspective.

Despite being healthy for my age and training for a marathon, I had no children, near misses or oopsies. I’ve never been forced to do quick mental math upon seeing an ex-girlfriend bearing down on me pushing a baby stroller. All of these years I thought I was being careful, but to many, I was a unicorn – something heard about, but never seen.

As Esther and Claudia spoke, they determined the easiest way to proceed was to test me. Turning to Esther, she asked, “Do you think he’ll have a problem with that?” She was standing next to me. Don’t you love it when someone asks if you’re willing to do something, but they don’t ask you?

Without pausing Esther replied, “He won’t mind, but he’ll joke about it for the next few months.”

I was so proud, she knew me so well.

To prepare for the test, I was instructed to abstain from sex for a week — kind of like cramming for an exam — only with no cramming of any kind involved. I was given a prescription for a seminogram, a ***** analysis to confirm if my little guys had any life in them.

I spent the week anticipating sitting in a quiet room with my pants around my ankles and a cup in my hand surrounded by enough **** to jump start a 90-year old man. I was a little worried too — after abstaining from sex for a week I wondered if one cup would be enough.

I took the day off work, and planned to fill a plastic cup in the morning before going home for my last long run before my upcoming marathon. When I scheduled the off-day I had no idea that running twenty-one miles would be the easiest thing I did that day.

I don’t embarrass easily, but this day was the exception. It started when I handed the prescription to the receptionist. After reading the slip of paper, she paused for a second before saying in a low voice, “Sir, I don’t think we do this here.”

Surprised, I replied, also in a low voice, “My fiancé’s’ gynecologist sent me here. She told me to go to the Abrams Clinic on Austin Street. I’m pretty sure she didn’t send me on a wild goose chase. Could you confirm whether or not you do this test here?”

After speaking to a co-worker, she told me they don’t do that test at this location. Seeing the vein in my forehead starting to bulge she explained, “We have another location down the block that handles this kind of testing.”

Taking my prescription back, ****** and slightly embarrassed – no just ******, I rushed out scrambling down the block looking for the other clinic. I realized now that if I stopped and asked for the address it would have saved me some aggravation, but I was eager to get going. It took me fifteen minutes to find the correct location.

When I finally arrived, I was greeted by a charming woman behind the counter with the kind of perpetually ****** off expression that told merhat this wasn’t going to end well. After handing her my prescription, she handed me a little plastic cup and the accompanying Ziploc bag.

Finally, I thought. I then asked what I thought was an easy question, “Where’s your bathroom?”

She looked at me with the puzzled expression of someone asked to explain one of Einstein’s theories, and said, “You can’t do that here.”

Did I hear her correctly? “So where am I supposed to do this?”

I tried reassuring her, “I’ve done this once or twice before, I promise I won’t make a mess.”

Like a bull digging in its heels, she shook her head saying, “I know you won’t because you won’t be doing it here.”

Then she added, “You better hurry up because they’re coming to pick that up in about twenty minutes.

Trying not to panic as I heard the music from Mission Impossible playing in my head. I racked my brain thinking where I could do this. Then it came to me. On Continental Avenue in Forest Hills there’s a Starbucks. If you’ve been to this specific location remember this story the next time you go there.

I rushed over and thankfully found that the restroom was available. Taking a deep breath, and sneaking a peek at the barista with the tongue ring and ****** lower-back tattoo for motivation, I closed the door behind me.

Closing my eyes and resting my head against the wall for a second, I achieved the proper frame of mind. Things were moving along well, then I heard the loud BOOM BOOM BOOM of someone banging their fist against the restroom door. Keeping my mind on the task at hand, I shouted, “GIVE ME A MINUTE!” I give myself a lot of credit, under those circumstances – a lot of guys would have been holding silly putty.

Finishing up, I put the cup in the Ziploc bag before heading back to drop off my sample. Stepping outside, I felt a stiff wind and it felt like the temperature dropped about 10 degrees. That’s when my paternal instinct kicked in. I was concerned that my boys wouldn’t survive the cold weather. With all that I went through to produce this sample, that just wasn’t gonna happen. So, I put the cup under my sweatshirt hoping that my body heat would keep them safe until I dropped them off.

When I returned to the clinic, I saw no one behind the counter. Did I miss the delivery? I started jumping up and down and shouting “hello” to get someone’s attention. Just then, a door opened and it was my friend, Miss Congeniality.

Flashing her my best Mission Accomplished smile, I held the cup aloft like it was a trophy.

Following her into an office, she sat down in front of a computer and pulled on a pair of rubber gloves. After imputing my information, the printer spit out a set of labels, one for the cup and one for the paperwork. She looked at me and asked me to put one label on each.

Looking at her as I pressed each label down, I said, “But you’re the one wearing rubber gloves.”

Frustrated and confused, I called Esther at work to share the details of my eventful morning. I said, “Honey, you know I love you. Let me tell you how much.” I then relived every detail of what happened.

I worried that the boys wouldn’t survive the cold weather. I told her in a slightly panicked voice, “If I fail this test, I demand a retest. It wasn’t me, it was the weather.”

Two weeks later, Esther had me share the story with Claudia before reviewing my test results. She told me not to worry. After looking at the printed page, she informed me that I passed the test by a wide margin and like a true smartass wrote a grade of A+ on the top of the page before handing it back to me.

When we got home I put my test results on the refrigerator, held in place by a couple of magnets — it stayed there for a good six months. It was quite a conversation starter. Whenever friends dropped by for a visit, they would ask,

“Those are the results from Frank’s ***** test. He has quite the sperm count.”