What happens if a tortured soul forever trapped inside a prison like house. Forever chained by this animalistic rage that could not be severed. So that it could not be set free, finds its next set of victims to relieve its eternal stress? 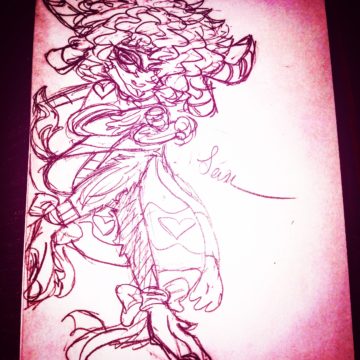 Oh can you hear it?

The sound of the gears twisting,Turning with the ounce of realization inside the small undeveloped skull of the girl that saw the red paint.

That soaked into the floors spraying the halls with its beautifull shade of crimson that stood out in contrast to the white coated walls.

But that wasn’t all she saw.

Bodies of flesh were lying on the ground.

They were also drowned in the color of red except it was darker and it emitted a scent. Making the girl scrunch up her nose in disgust as the air wafted a smell smiliar to that of metal.

The scent of blood

She didn’t know how to react, she didn’t know what was happening perhaps what she was seeing was one of her dads sculptures of art. He would always leave what he created lying around. That was what she was thinking, not actually processing that those lumps were not that of the clay origin but of limbs.

While edging ever so slowly towards the supposed crime scene. She saw that the lifeless clumps of clay were actually that of her parents. However something was missing from each of the bodies, what was needed for a fully functional human being was gone.

The girls eyes widened, dripping with a watery substance. She held her petite hands to her small mouth trying not to violently cough up her guts. She shakily took a step back, just thinking they needed help. Her parents looked badly injured.

Yes the little girl thought I just need to get someone to patch them up.

Just like humpty dumpy who fell off a high place. Lying on the cold ground with his yolky insides flowing out of him.Their cracked open heads were also oozing out, a pink slush of brain matter along with the little pieces of their cranuims pulsing and twiching due to being exposed to the air.

The girl tried to run out through the door that was opened revealing the light of day, but it was cruelly snatched away from her grasp and replaced with a dim light.

What she also noticed was a very deathly pale long nimble bony hand. Was holding the door shut. Her eyes traveled up their misty black form looking straight in to eyeless holes. That were as deep as the ocean carrying a weight that seemed so heavy that it was suffocating her whole being.

She was frozen in place, glued into her feelings of fear and anxiety. But soon enough she wasn’t looking at the eyes that chained herself to that very spot. Instead she was looking at the inhuman like feet. She was confused until something once again changed her views of everything.

Those haunting holes were starting right into her except she wasn’t still like a statue in fact she had no control of her limbs. For She saw her body was detached from her.

“Agh~” moaned out a kid in complete annoyance.

“Come on guys don’t be such sissies were already here”

Angie took a deep breath a turned around and faced the four people in the group with an enthusiastic grin, with her arms spread out from her sides presenting the famous den of the underworld. She announced loudly with a booming voice

“Welcome everybody to the testing place of The Serial Compound! Where everyone who had lived here died a brutal death!”