Graft Test is about kids who go to the same school, but they all have a secret. Will they be able to save themselves? Find out in the next part of the book! 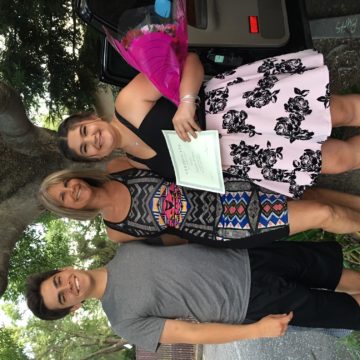 I have what some may call a blessing in disguise, but I call it a old family curse. When I was in 4th grade my father told me about the family “gift”. He said that I could help people and understand them. He also forgot to mention that you also have to spend years to learn how to control it. When I reached 5th grade I was still 9 years old, waiting for my 10th birthday. As the legend goes if the Fulken decadent wanted to become an Empath, on their birthday they wished that they would continue the family tradition the next day they would have the power. The old Family Guardian Angel would give you dreams about people in need and if you did not talk to them the next day and help them you would be punished. Which sounds weird I know, because why would a Guardian Angel hurt you. The Fulkens come from a long line of tough love I guess.

When I got this “gift” my father was in a car accident, he lived for a week on life support before my grandma “pulled the plug”. For the longest time I blamed my grandma for his death, I never got to say sorry because I was put in this boarding school. I wish that I could just say sorry even if she still hates me, I just need her to know how I feel.

August 3, 2014 was the day I got to this school. I meet my best friend later that day, and to this day she is my neighbor. Liza was hurting and I could tell. Back then I didn’t know how to control myself so I just said, What’s wrong I know that you are sad and I think we should talk about it. Lucky for me she agreed and that’s what started the friendship that will last a lifetime. She told me about her parents who stole government secrets, and how she is a Esprit-Changeur. For the first time I found someone with a Gift a strange as mine. It was so nice to be able to talk to someone. She didn’t call me a liar or laugh.

Last night I had the first dream from Michal, the guardian angel, in a long time. I saw Gabbie and a test lab. He told me that this was going to really affect me and that I have never felt an emotion this strong before.

When I went to school today I didn’t see Gabbie and knew that I need to find out why. I called her and she said she was sick at home. I knew she was lying, I can always tell. I told Liza and she mentioned that Gabbie was going to spend the day in the dorm with Drew. I was so sick of Gabbie and Drew, it was all about them all of the time. If he is the reason she is hurt I will kill him! I could see Mrs.Diaz the math teacher getting mad at me because I was talking to Liza. Sadly she moved me but I talk to everyone and so I just kept on talking. One of the most annoying things we could not do at school is lean back on the chairs. IF mrs.Diaz wasn’t saying stop talking it was All four on the floor. She was great.

After class I took LIza aside and I told her how how I was mad at Drew.

“Do you really think that Drew would hurt her? She is a smart girl if something was going on she would know what to do” Liza mentioned trying to calm me down.

“ I know, I just feel like all about them ALL the time. I wish that when we had a bad day our feelings were not pushed aside for there’s” I tried to not sound jealous.

“ I always care about you and your feelings, don’t ever feel like you are not heard.” She said with real emotion. I had realized that all of the times I felt unheard she heard me.

“I know, but it’s ok. I see people the way no one else does. I am just happy you know now. Please talk to me when you need to, no matter how late it is in the night. Or you could just come over,I am literally live right next to you!” She replied laughing.

I just smiled and we started to walk to our next class. I was really happy that Liza told me that. I have had a huge crush on her forever. I was just too embarrassed to talk to her, I mean she can read my mind so she probably already knows but still. But I still need to get a hold of Gabbie when out of nowhere I hear Liza’s, Drew,and my name over the loudspeaker.

“Could Liza Mendosa, Drew Hallmark, and Cody Fulken please report the the nurse’s office.” the lady on the other end of the loudspeaker seemed just as worried as us. We started to run to the office and when we got there we saw Gabbie. This is what MIchael was talking about. As soon as I looked at her I got a sea of emotion. Then I got another wave. THis time it was from LIza. She was not worried but angry. I figured she was going to mind warp her way out of this. Drew seemed the most nervous. I told him that she was ok and that liza would figure things out.

I saw Them walk out of the bathroom and then out the door. I knew Liza had fixed things. I then took Drew and we followed the girls. As soon as we closed the door I heard Nurse Jackie say that she caught Liza on tape using her gift.

Does the school know? Does everyone have a Gift? How did I not get this sooner. We are all here for our gifts. It was so obvious now. We were not here for our school work, or our grades but our Abilities. If they know that we have gifts why don’t they tell us they know. Are they using them against us. I started to run to Gabbies dorm and I immediately took Liza aside and said the school know, about all of us. We all have gifts!

We then pulled everyone to the bed and I said” what are your gifts the school knows them. I will go first I can feel people’s emotion.”

“I can go into people’s mind and change their thoughts.” Liza said sternly.

“OK, fine. I am from a Dragoline. I am a carrier of the eggs. The eggs for our family.” Gabbie screamed. We all looked at Drew and he looked nervous.

“I…I can see into the past and travel to the past as well. I know why we are here. This happened in 1433. Theys brought everyone to a school like this and tried to harness their powers. Almost everyone died but the survivors were too scared of being put in labs to tell anyone. This is the 585 anniversary of this school. I think that they are going to attack again” as drew was talking a green gas started to fill the air. Drew screamed”Grab on” and as we did we zapped back to yesterday. We had 24 hours to figure out how to get out of here before we all die.

This was our chance to save the world.