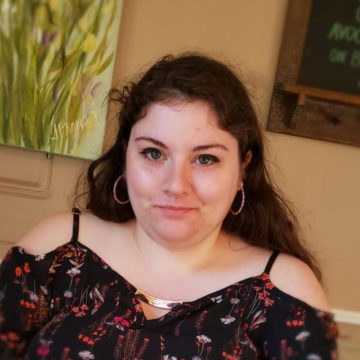 Lucie stood by the door, watching through the glass as people walked past the shop, not noticing her. She held a daisy in one hand, and a spell scribbled on a piece of paper in the other.

She sighed and glanced at the clock again. About five minutes still.

Shifting anxiously, she held the paper up to read the spell again. It was an old one, and she only knew about it because it had been in one of the books Cecilia gave her when she began working at the shop. Florists these days rarely needed to know flower magic – charms now came condensed and could be sprinkled into the water and absorbed into the blooms – but Cecilia had never been modern. Lucie had even found herself intrigued by the portents of flowers, that they could be taken as omens for good luck or bad, for sorrow or love…

Oh, why not? Maybe John would get out early.

Straightening, she cleared her throat and, tucking the paper under her arm, held the flower just in front of her. Then she plucked a petal and let it fall to the ground. “He loves me,” she said quietly, but clearly, trying not to feel foolish.

She rolled her lips in and told herself not to look at the clock. Again, she plucked a petal, and said a little louder, “He loves me not.”

She noticed someone at the door. She froze with her fingers on the last petal.

Then she realized. It was him.

She panicked and raced behind the counter, only realizing as the door was opening that she had dropped the daisy.

It was too late.

John stepped inside and noticed the flower on the ground, one petal still attached. He picked it up, then smiled brightly at Lucie.

As he held it, the last petal dropped to the floor.