"As the sun went down her eyes would still glow, a bright red light guiding the lonely souls. She was once a human who extended her limit, respecting the prophecy that was places upon her." «» No regular story can start like this. With a girl who couldn't take it anymore, a prisoner of the same old routine, until... The secret was out. Riya, a vampire, who won't stop at power, respect or fear, comes to this world and rules it. «» 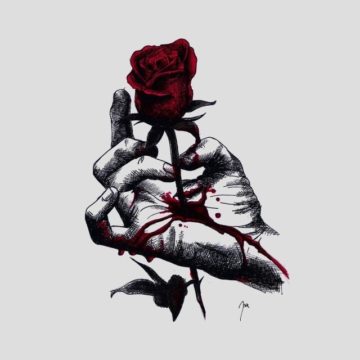 The freezing air was invading her lungs as she was sitting at the tree. The girl was no older than 18 or so she looked like. She was concentrated, focused on the old looking book placed on her legs. She was reading the antique pages carefully, not to destroy them in any way.

“Every human will always be an actor. They shed a tear so easily, but the true pain is never known. And when you face it, you’ll think that you’ve never known happiness.” she let the hot air escape her lungs reading the last paragraph.

No matter how many times she would read this diary, the girl never understood what the author meant by that. Without realizing, her mind was completely lost in those thoughs, when suddenly a white haired woman appeared in front of her.

“Riiiiiyyaaa~ are you still there?!”

“Again with that old journal of yours? Your grandmother really didn’t have good taste in books.”

The hyperactive gril was Amy. She had long wavy hair so different from the short brunette hair of Riya’s. They were what most of them consider opposites.

Character and looks the two of them were nothing alike. Riya was short flat and mean with most of the people. She was the definition of introvert and always sat alone. For their knowledge it wasn’t always that way. Yes the tall curvy young lady Amy was considered to tag along with Riya just because of pure pity and nothing more. But every one has a secret. While Riya showed hers, Amy kept it hidden.

Riya lacked color in her eyes so her iris is a pure bloody red. Even doctors couldn’t explain how this happened. For that alone people at her school feared Riya. They considered her a freak, a stranger, for short they hated her.

Amy’s secret on the other hand was much more darker. She was raped at the young age of fifteen. From that moment she would hate her gorgeous body. But so little knew the truth. From that moment she changed. For real. Wherever she is in danger her appearance and character would change 180 degrees. She would get short dark hair and green eyes, she would become a brute with monstruos power that would protect her fragil side. Esther as she was named. But that is a story for another time.

“You are so coming to the Winter Dance!” said Amy to Riya as she got up.

“No I’m not. I prefer to stay home. I don’t wanna be around so may people! They’re scary!” she fought back, but Amy wasn’t so easy to convince.

“Come on. There is a rumor someone wants to invite you to the dance.”

Aaron. The biggest **** boy you could ever know. He was every girl’s dream. Blonde hair with dark green eyes and a sexy smirk. There was no way Riya would go with him or even attend to the ball at all.

“No chance Amy. I’m not going. I prefer to stay home and watch Supernatural. There is the upcoming season 13 and I want to watch the series again.” said Riya without paying attention where was going.

The girl bumped into a tall dark headed boy with sweet dark blue eyes. He took advantage of the situation and got low to wishper in her ear.

” Such a pity. May I keep you company?”he said with a sexy French accent.

He passed leaving the girl in the middle of the street.