Yeah, maybe I’m a bad daughter for saying that. But starving your children, calling them worthless, and bruising them makes you a bad parent.

Luckily, I got away from it all. My brother and I are spending our second night at our cousins’ house tonight.

Let me back up. My name is Kelli. My brother is Logan. We have just escaped our abusive parents to go live with our Aunt Janet, our Uncle Paul, and our cousins, Kacie and Libby. Kacie is my age – 15 – and Linny is 10. Logan is 17.

Moving in has so far been… well, weird. I could tell the minute I walked into Kacie’s room that she’d spent a lot of time trying to prepare for my arrival. Everything – her bookshelf, her dresser, her desk – was totally empty. There was an enormous stack of boxes in the corner, where I assumed all of her stuff had gone. We weren’t exactly sure how it would work, sharing a room full time. But if we could do it 5 weeks out of the year, then we could adjust to doing it year round.

Janet and Paul had wanted us to each have our own room, but there weren’t enough rooms in the house for that. So, instead, I was moving into Kacie’s room and Logan was getting the guest room. For now, I was sleeping on Kacie’s trundle bed, but we were planning on changing that tomorrow.

Where I decided I want to start, Uncle Paul, Kacie and I are each sitting at a table with a notebook and a pencil. On each notebook is an outline of Kacie’s room from above. So far, what I had was this; 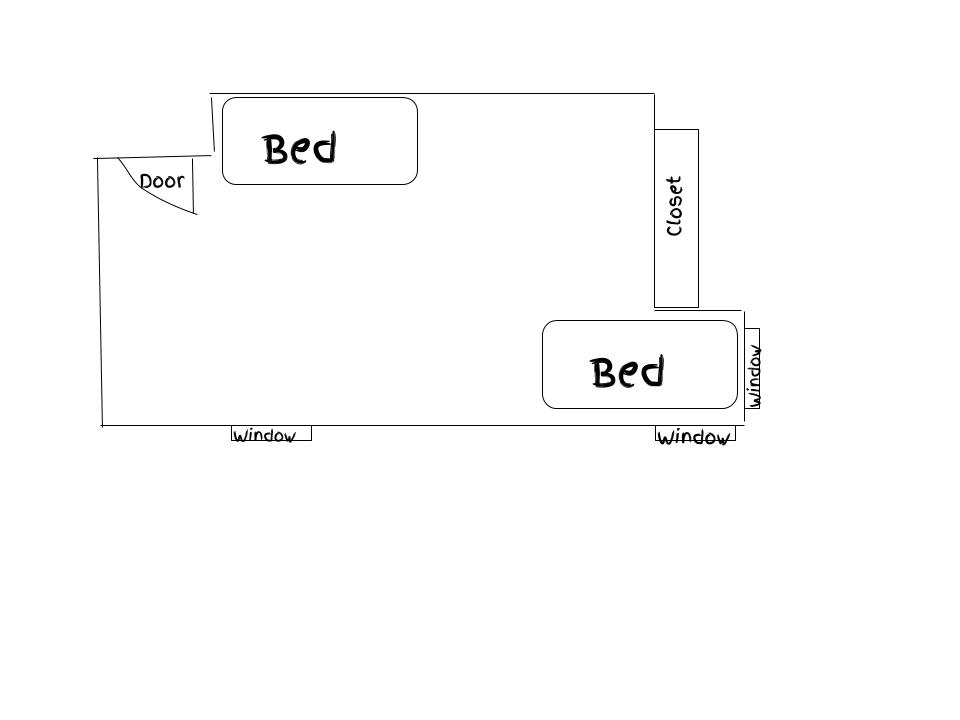 And in case you hadn’t figured it out, we were trying to plan what to do with Kacie’s room so that I could live there too. We’d decided that we could still share the bookshelf, desk, closet, and dresser, so really all we needed to do was dig her second nightstand out of storage and figure out how to move everything around to fit two beds.

After a moment of consideration, I placed her sky chair in the corner across from the door, and her bookshelf on the other side of that window. Then I put the desk at the foot of the bed that was near the door and the dresser next to that.

Kacie glanced over at my sketch, back at her own, and furrowed her eyebrows. “I like yours,” she said, “but you forgot the other shelf.”

Confused, I looked up at her, “What?”

“The wooden one. You know, It’s got the shelves in front and the drawers on the side?”

“Oh, right!” I said. I had forgotten about that shelf. After a while spent puzzling over the placement of the shelf, I finally drew a rectangle between the sky chair and the bookshelf, directly underneath the window. In the end, my drawing came out a bit like this; 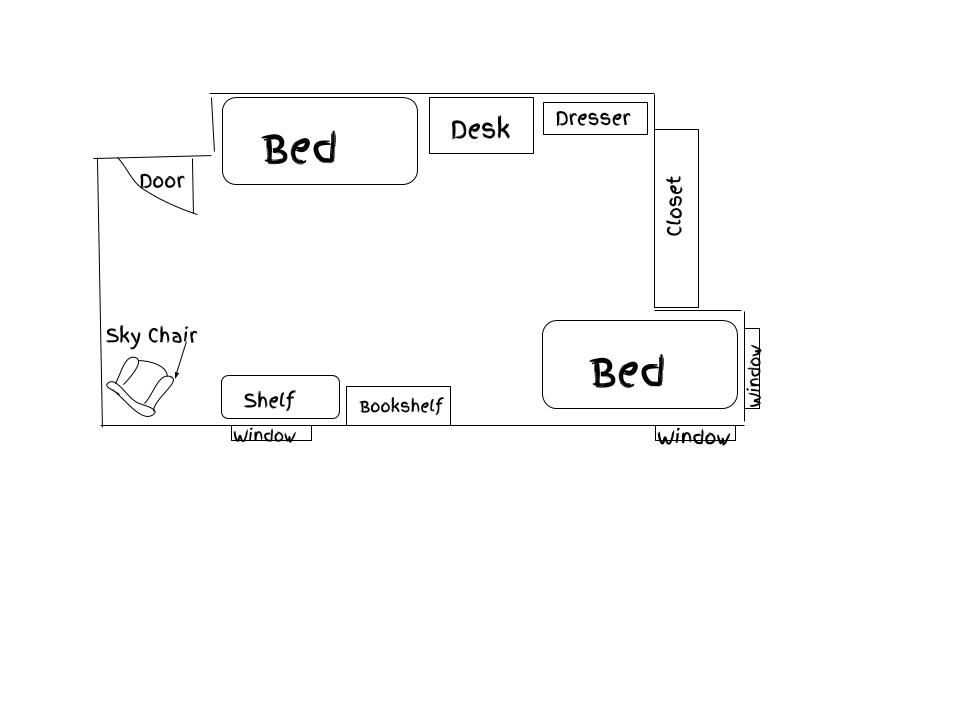 Once we were all finished, we looked at our drawings to see whose we liked best. Kacie held up ours for comparison, then nodded approvingly and said, “We should do yours.” I was happy she liked mine. We’d decided that whatever we decided on today, we would set up tomorrow. Even though tomorrow was Monday, so we really should have gone to school, Aunt Janet had decided we could stay home an extra day. Besides, Uncle Paul had to go to work on Tuesday, Wednesday, and Thursday, and he had to do all the heavy lifting, so he really had to be home for us to do this. We would go to Lowe’s later today to get the second bed.

Kacie stood up and made her way to the fridge. From within its recesses, she called, “Do you guys want anything?”

I looked up and smiled. At home, I was never just offered anything out of the fridge; I’d always had to sneak it.

“Do you still keep cream sodas in there?”

“Yep.” She pulled two cream sodas out, popped one open, and handed the other one to me. I hadn’t actually been here since I was four, but I still remembered the sweet taste of the sodas that Kacie had been obsessed with.

Just then, Aunt Janet returned from walking the dog. When she saw the sodas, she chuckled and shook her head. “it’s been a while since I saw this.”

I smiled and took a sip of the soda. My eyes widened in surprise as the bubbles spread over my mouth, sending a tingly feeling through me. It was just as I remembered. I smiled again.

Janet replied, “She went to her friend Kristy’s house down the street.”

Janet thought for a second, then said, “I think he’s looking up the school. He wanted to know what it would be like there.”

I suddenly realized that Logan wouldn’t be getting the guide that I would. Kacie would show me around the school since we were in the same grade and we’d arranged that we’d be in the same classes too. It would be interesting to meet her friends and stuff. But while I would get this head start, my brother would be on his own.

Now, I’m going to skip over the next day. Nothing that interesting happened except for Kacie spilling her soda all over her overalls when she tried to move it off the desk (which we were moving over to where it had been placed on my drawing).

On Tuesday, Kacie’s alarm went off at 6:00 and we wandered out to the living room for breakfast… sort of. When the alarm went off, I jumped out of bed, slammed the off button, and jumped back into bed to pretend to be asleep. I then had to explain to Kacie that I used to get punished for loud noises, and… old habits die hard.

Anyway, after that, the interesting stuff started on the bus. Not 30 seconds after we sat down, some guy in the seat behind us popped up and covered Kacie’s eyes. She didn’t even flinch, just said, “Kelli, is this a guy with black hair and a red sweatshirt?” Before I could reply, the guy moved his hands and sighed.

“Will nothing surprise you?” He said.

“Nothing you can do,” she replied, smiling, “Kelli, this is Ethan. Ethan, this is my cousin Kelli.”

Ethan dropped into a mock bow, waving his hands around like some psychotic magician, and said, “Pleased to make your acquaintance, Miss Kelli.” After he straightened back up again, he added, “What are you doing on this bus today, Miss Kelli?”

I laughed and, instead of answering his question, asked (jokingly of course), “Are you always this weird?”

“Kelli’s here because she’s moving in with my family,” Kacie said suddenly. Ethan looked surprised for only a second before I saw the wheels starting to turn in his mind. He tilted his head to the side and asked, “Why?”

“None of your business.”

I turned to glare at Logan, sitting across the aisle.

“I didn’t say I would.” I began to turn back to my previous conversation, then hesitated, “What’s up with you today? You’re moody.”

“Nothing,” he said (Quite moodily, I might add), and he went back to his book. I rolled my eyes and returned to Kacie and Ethan.

Kacie and I exchanged a look, and we both said, “Don’t mind him.” Realizing we had spoken in unison, we both smiled, then I said, “I don’t know what’s wrong with him today. Usually he’s really nice.

“Yeah. That’s Logan,” I said. Then, looking down at my hands, I said, “He was right about one thing though.”

“You’re not gonna tell me why you moved,” Ethan guessed.

By that time, the bus was pulling into the school parking lot. We piled out onto the sidewalk, then made our way towards the doors of Summit High School.

I took a deep breath, then followed Kacie inside.