"I think my new tattoo is haunted." This story is for the End-of-Summer writing contest 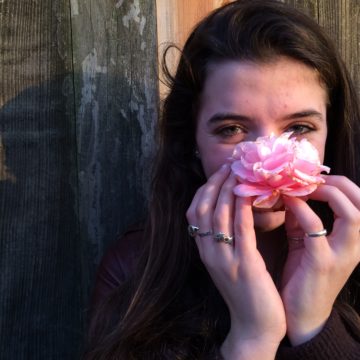 To say Daisy was drunk was an understatement, she was-

“Abso-TUTELY hammered!” Daisy yelled while twirling in the street, her best friend Peter rushing after her.

“Hey Daisy, let’s get out of the street.” He said pulling on her waist to get her onto the sidewalk. “I should have payed more attention to how many shots you took.”

“Oh my GOD!” She yelled. “I’m gonna get a tattoo!” Daisy pulled him across the street to a little tattoo parlor on the sleeping city streets. “It’s still open!”

“This is an awful idea.”

“This is an amazing idea!” Daisy shouted right over him.

She walked into the tattoo parlor and was greeted by a man in his twenties looking a little worse for wear.

He slowly pulled out a pen and a waiver and then pointed to a couch on the other side of the room. “You will have to fill out this form, it goes over basic stuff and some things.” He shrugged. “Like we aren’t liable if you don’t want the tattoo when you are sober again.”

“Whatever, just sit down and pick out your design, will get you going once you have one picked. Don’t take too long, I wanna leave.” The boy drawled and then disappeared into a backroom.

“I think I’m going to get a daisy.” She said smiling confidently.

“And there is the bad one.” Peter sighed, while Daisy scribbled her name into the different boxes then collected the money she would need to pay.

“You guys ready?” A man equal as fit as to be working in a tattoo parlor sauntered in from the back room. He had sleeves of tattoos and his hair was chopped short on the sides.

Peter walked beside her and then leaned in close. “Daisy, do you really want Panic at the Disco to permanently mark you?”

“We both know I’m not drunk enough to think that guy is Brendon Urie. This guy’s more fallen angel than God.”

Daisy hiccuped. “It’s the only edgy part about me-” She hopped up onto the tattooing chair. “But soon, I’ll have something even more edgy.”

Peter woke up to a call from Daisy.

“You are a terrible friend!” She yelled into the phone.

“Actually it could have been worse, I think you picked out a cute little design.” Peter said, yawning and pushing back his covers.

“Little?! It covers my whole arm, this is awful.”

“What are you talking about, you got a daisy on the inside of your wrist.” Peter explained.

Daisy growled a little. “That’s not what I’m looking at.”

Daisy was in full panic mode when Peter walked in to her house.

“Peter! What do I do? Look at my arm!” She exclaimed. She wasn’t wrong the whole arm was covered in some sort of swirling design, and the longer he looked at it the more it seemed like the tattoo was moving and living on it’s own.

“Does it look like it’s moving to you?” Peter asked.

“Calm down, Daisy. Let’s just go back to the shop and talk to the guy that was working.”

Once they got to the shop, they described the artist who did Daisy’s tattoo to the store manager. The whole while he looked a little confused if not down right concerned.

“WHAT!?” Peter and Daisy both yelled on top of each other.

“Then who did I let tattoo me-“

“Who was it then?” Their words flooded in overlapping.

The store owner shrugged and shook his head. “I only got like ever five words of that, but you signed the waiver and the liability form. You can’t touch me really.” He said.

Peter and Daisy just left defeated while Daisy poked at her tattoo. “I can’t believe that guy just like inked you up and then disappeared.”

“I feel like we can sue, I don’t think that guy known what he is talking about.” Daisy said crossing her arms.

“You could sue, but who would want to sue me.” Hissed a voice. Daisy jumped and Peter looked around. “Nope down here.”

Daisy uncurled her hand to find a moving human face talking to them through the ink of her tattoo. She screamed-obviously- and held her hand far from her face. “OH MY GOD, MY FREAKING TATTOO IS HAUNTED.”

“That’s one way to put it, but ghost haunt. I just terrorize.” Said the tattoo.

“Well, who are you and why the hell are you in my friends tattoo?” Peter said leaning over investigating the face.

“I’m Lucifer, pleasure to meet you.” He said smiling.

“Oh my,” Daisy started and while Peter began to freak out Daisy actually stayed calm for once and just said, “Business must be slow if Lucifer is working at a tattoo parlor?”

Peter whipped his head to Daisy and she shrugged.

“What? It’s weird, why do this when he could literally torture souls in the underworld.”

“LUCIFER IS ON YOUR HAND!” He exploded.

“No need to get worked up y’all.” Lucifer said. “I just like to cause a little trouble, you’ll have a inkless arm pretty soon.”

“No, I do birthday parties now.” Lucifer smiled. “See you two around.” And the tattoo faded back into nothingness.

“Huh?” Daisy turned her hand over examining her freshly cleared skin. “Wonder how much it cost to get Lucifer at you birthday party.”