Inside IMRA: An Excerpt from Otherworld by Jason Segel and Kirsten Miller

“The world you came from is governed by laws and rules and social conventions, but Imra was built to offer a safe haven from such things. The guests in Imra are free to do as they will. None of us are here to judge. You spend so much time and effort fighting your instincts in your world. Well, we’re here to tell you it’s okay—you can relax for a while,” she says, still revoltingly chipper. “So! Any of you tempted to get a rubdown or go for a plunge?”

Carole and Gorog turn to me, confusion written all over their faces. We came to Imra to hide from a swarm of killer bugs and now we’re being offered bodywork.

“No?” Our tour guide seems a bit disappointed, as if our com­fort were her personal responsibility. “Well, then anyone hungry?”

We leave the spa and Margot leads us farther down the spi­ral path to a second building. The smell of roasted meat nearly knocks me to my knees before I even step inside. My mouth be­gins to water and my stomach groans miserably. I have no idea how many hours have passed since my body back in the real world had its last meal. The others don’t seem to be quite as af­fected, and I realize that wherever they are, their bodies must be hooked up to IVs that prevent them from starving. But I need something in my stomach before I move on.

My nose leads me through the building’s marble foyer and into a sumptuous banquet hall under a domed roof. There are hundreds of beautifully set tables, but almost all remain empty. In the center, residents in chefs’ coats and hats are tending to three monstrous beasts that are roasting on spits. Smoke from the fires twists upward like a vine toward a vent in the ceiling.

“Have you ever tried buffalo?” Margot asks the group. I haven’t, but right now I want to more than anything in the world. “Our guests rate it very highly.”

“Guess we’re taking a little break,” Gorog remarks as I pull out a chair at one of the tables. Before my ass can slide into the seat, a resident sets a plate in front of me. Ignoring the utensils that have been provided, I dig into the meat piled high in the center. And it is divine. In fact, it’s the best stuff I’ve ever eaten. I smell it and taste it and feel the grease it leaves between my fingertips. I wash the meat down with the beer someone hands me, which leaves my brain buzzing, and keep shoveling buffalo into my mouth.

I hear Carole tsk. “I see someone forgot their table manners,” she drawls.

When I glance up from the bone I’m gnawing, I realize that Carole wasn’t talking about me. There’s a couple sitting about ten tables over. Empty plates are piled up around them, and the floor near their table is ankle-deep in bones. The woman, a blonde in a Grace Kelly dress, picks up her latest plate and licks it clean. When it’s a sparkling white, she puts it on top of the stack and one of the residents places a full plate in front of her.

Arkan is heading toward them, his armor clanking. “Emma?” he calls, but the woman doesn’t acknowledge him. She’s holding another plate to her face when he reaches her.

“Stop eating!” He grabs the plate and hurls it to the floor, where it shatters.

“No judgments,” Margot chirps for the second time.

Arkan bends forward to examine the woman’s face. “Not Emma,” he mutters, and then stomps away.

“Gorog, what in the hell are you doing?” I hear Carole whis­per angrily.

“Getting this all on camera,” the ogre responds.

My eyes turn to Gorog, and I find him aiming the camera of a tablet-size device in my direction. I can’t figure out where he got it, until I see there’s one at every place setting. Which seems unbelievably strange.

“Stop,” I demand with my mouth full. I reach out a hand to snatch the device.

“Too late,” says Gorog as I take it away. “I already sent the video to everyone you know.”

I’m about to kick his ass when I remember that he doesn’t actually know anyone I know. “Hilarious,” I try to say, and end up choking instead.

“What’s the deal with all the cameras, anyway?” Gorog asks Margot.

“If you don’t record your fun, how do you know for sure that it happened?” Margot jokes. Or at least, I think she’s joking. “Our guests like to share their experiences in Imra with their friends and family back at home—and we encourage them to do so. It’s excellent publicity for Otherworld.”

I’d love to make a snarky comment, but I’m too busy chewing to think one up. I finish the last bit of food on my plate and find a new one in front of me. I should stop, but I can’t.

“Dude,” says Gorog. “Your avatar is going to explode.”

“Now, now,” Margot chides. “He’s just enjoying himself. If the rest of you aren’t hungry, why don’t I show you a little bit more of Imra, and your friends can catch up with you later.”

“Friends?” Something seems to have set off an alarm in Carole’s head. “Wait a second. Where’s Arkan?” she asks. I glance around the room. While Gorog was filming, the red knight disappeared. “Hang tight,” Carole tells me. “We’re going to go find him.”

I’m still chewing as they rush away.

I have no idea how much time has passed—or how many plates I’ve been through. I feel a bit fuller than I did when I got here, but if anything, the need to eat has only grown. My hands simply aren’t fast enough to deliver the food to my face. I’m on the verge of getting rid of my five-fingered middlemen and lifting the plate straight up to my lips when I notice that Carole’s returned. She’s standing a few feet away, staring right at me.

“You’ve got to come with me,” she demands.

“Get Gorog to help,” I say, annoyed that I have to stop chewing long enough to speak. “He’s bigger than I am.” I don’t bother to add that I never liked Arkan much anyway.

“Gorog is helping. He’s keeping that robot lady busy while I come to get you.”

“I don’t give a damn what she is!” Carole shouts so loudly that even my fellow diners look up. How long have they been here, I wonder uncomfortably. She lowers her voice and continues. I no­tice that she’s trembling. “This place isn’t right. There are strange things happening here. Get up,” she orders.

She puts her hands on her hips and her nostrils flare. “You said you came to this place for a reason. What is it?” she demands. “Do you even remember?”

“To find Kat,” I mutter with a mouthful of buffalo. The words mean something, but I can’t seem to put it together.

“That’s right. You came all this way to find your friend, and now you’re just going to sit here in this resort from hell eating vir­tual meat? Your friend could be three doors down from here, and you’d never even know it. Are you in love with this girl or what?”

I never said anything about being in love with Kat. But what other reason would I have for being here? Carole’s words cut through all the knots that were keeping me tied to my seat. I glance down at the pile of food on the plate in front of me. It’s fake meat made from fantasy beasts. But it’s been my sole obsession for what might have been hours now—hours that I could have spent going after Kat. And yet, even now, I crave it. My fingers are aching to snatch one more piece. And that urge is terrifying. This is what Otherworld does to you, I realize. It gives you what you want. The only way I’ll make it through is if I remind myself that there’s something I want much more than anything else. I want to find Kat. 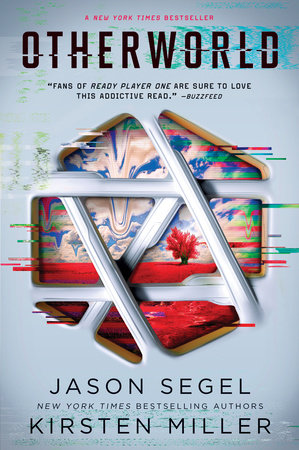 Inside MAMMON: An Excerpt from Otherworld by Jason Segel & Kirsten Miller 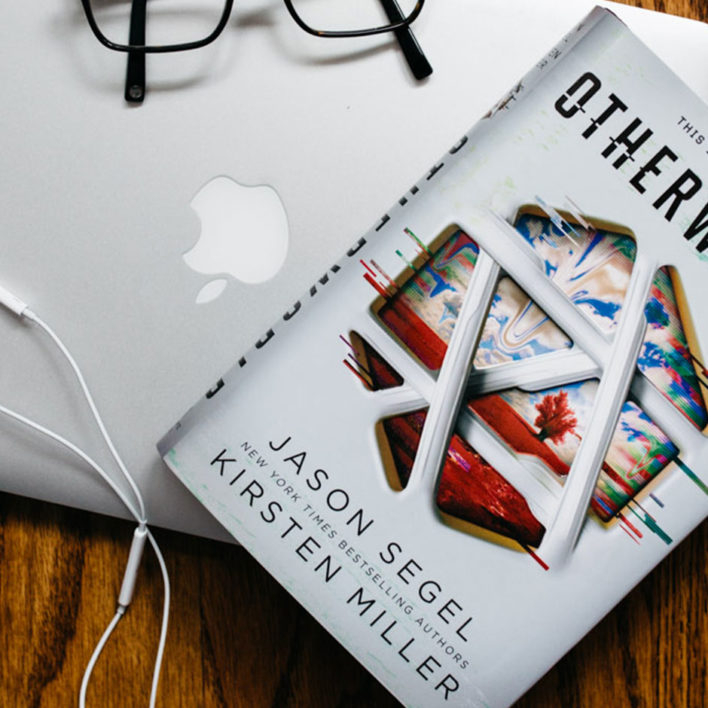 Inside NASTROND: An Excerpt from Otherworld by Jason Segel and Kirsten Miller 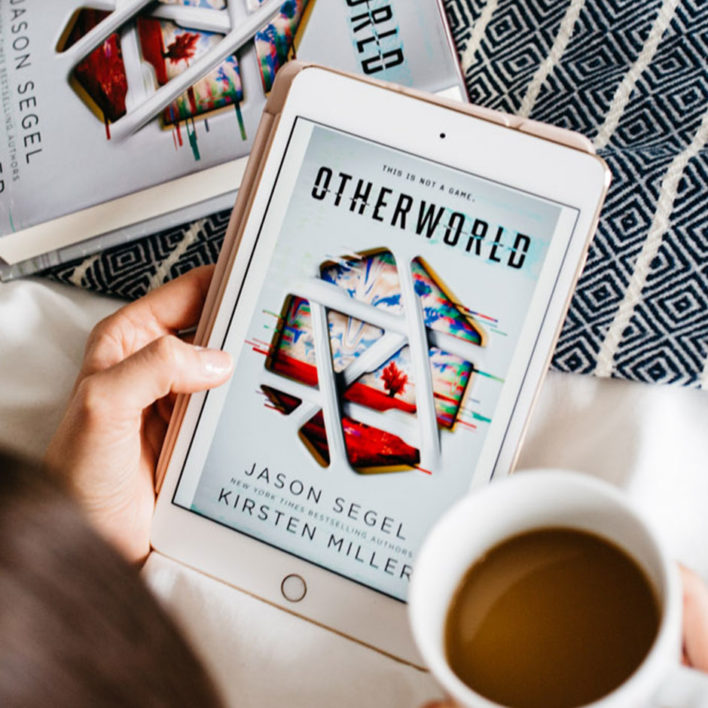