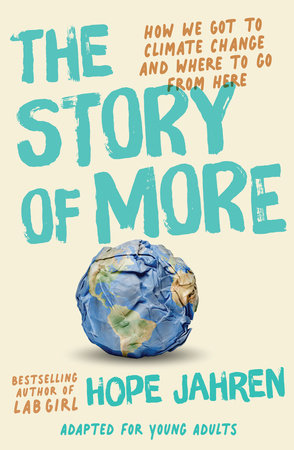 The Story of More (Adapted for Young Adults)

By Hope Jahren
On Sale 11.02.21
This young adult adaptation of acclaimed geochemist and geobiologist Hope Jahren's highly respected nonfiction work is the perfect book for those interested in learning about climate change and how they can contribute to creating a more sustainable future.


Hope Jahren illuminates the science behind key inventions, clarifying how electricity, large-scale farming, and automobiles have both helped and harmed our world. She explains the current and projected consequences of unchecked global warming, from superstorms to rising sea levels, resulting from the unprecedented amounts of greenhouse gases being released into our atmosphere.

The links between human consumption habits and our endangered existence are very real. Still, Jahren maintains that our ever-broadening science-based knowledge can help us counter these effects. The eye-opening information in The Story of More will help readers understand the path needed. If we collectively make informed choices now, Jahren reassures, our future can be as bright as we imagine it can be.
Read more
Read less
Read Excerpt
+ Add to My Bookshelf
+ Add to Goodreads

The Story of More (Adapted for Young Adults)

The sun and solar energy. What a source of power! I hope we don’t have to wait until oil and coal run out before we tackle that.
—Thomas Edison to Henry Ford and Harvey Firestone (1931)

Important men have been arguing about global change since before I was born.

But that’s not all. Back in 1969, the Norwegian explorer Bernt Balchen noticed a thinning trend in the ice that covered the North Pole. He warned his colleagues that the Arctic Ocean was melting into an open sea and that this could change weather patterns such that farming would become impossible in North America ten to twenty years hence. The New York Times picked up the story, and Balchen was promptly shouted down by Wal­ter Whittmann of the U.S. Navy, who had seen no evidence of thinning during his monthly airplane flights over the pole.

As is the case with most scientists most of the time, Bal­chen was both right and wrong in his claims. By 1999, the sub­marines that had been cruising the Arctic Ocean since the 1950s could clearly see that polar sea ice had thinned drastically during the twentieth century—thinned by almost half. Nevertheless, it’s been fifty years since Balchen graced the pages of the Times and American agriculture has yet to feel the full effect of any melting. Which, technically, means that Whittmann was also both wrong and right.

We shouldn’t be surprised when scientists are wrong. All human beings are a lot better at describing what is happening than at predicting what will happen. Somewhere along the way, however, we began to hope that scientists were different—that they could be right all the time. And because they’re not, we kind of stopped listening. By now we’re quite practiced at not listening to things scientists say over and over again.

For example, giving up fossil fuels is not a new sugges­tion. Starting in 1956, a geologist named M. King Hubbert who worked for Shell Oil started writing passionately about America’s need to embrace nuclear energy before our “inevitable exhaus­tion of fossil fuels.” Hubbert believed that mining uranium from the bedrock of Colorado was more sustainable than burning oil and coal, which he reckoned would hit peak production by the years 2000 and 2150, respectively. He was both wrong and right.


Let’s go back to 1969 for a moment, back when Balchen was fighting with Whittmann and Hubbert was still on his soapbox. I don’t remember 1969 personally, but, like every year, it was full of beginnings and endings, problems and solutions, equal to any that had gone before or have come since.

Most of the trees you see out your window were barely seeds in 1969. Wal-Mart Stores, Inc., was incorporated in 1969 and has since become the world’s largest private employer. Sesame Street premiered in 1969 and went on to teach millions of children how to count and spell. Big things started out as small things, then grew to change the world.

When the polluted Cuyahoga River caught fire in 1969, every single fish between Akron and Cleveland died, and Time magazine’s coverage led to the creation of the Environmental Protection Agency. That same year, an offshore oil platform dis­gorged more than one hundred thousand barrels of crude oil onto the beaches of Santa Barbara, California, killing every sea creature in its path and spurring the organization of Earth Day, which is now observed around the world.

Way up north, in Mower County, Minnesota, my parents weren’t paying attention, for I was one of the ten million babies born on September 27, 1969, and the last of their four children. The world would be different for this baby, my parents promised each other, and they made the ancient vow that all mothers and fathers make in the euphoria that follows a happy birth.

I would have all the love that my father could give and all the love that my mother should have been given. She will grow up free, my mother resolved—free from hunger and from the shame of being taken by the county. My father, for his part, looked for­ward to a century of technologies that would save us all from sickness and want. Like the millions of couples who had come before them, and would come after, they looked at the world that they lived in and thought about the one that they wanted. Then my parents turned to each other, in love, and they named me Hope. And they were both right and wrong at the same time.

Forty years later, in 2009, my department chair called me into his office and asked me to teach a class on climate change. I groaned and slouched down into my chair. Convincing peo­ple to examine their energy use is like trying to get them to quit smoking or to eat more healthfully: they already know that they should do it, but there’s a billion-dollar industry working round-the-clock, inventing new ways to make sure that they don’t. I also couldn’t help thinking about Edison and Ford and Firestone and Balchen and Whittmann and Hubbert and Sagan and Gore and all the important men who had already tried to raise the subject and, quite frankly, wouldn’t have thought much of a lab girl like me. I thought about the car I’d driven to work that morning, and how it leaked oil terribly, and wondered what business I had in telling anybody anything.

I left my chair’s office and went back to my lab, where I con­ferred sulkily with my coworker Bill. I asked him, after detailing the futility of it all, why I should even try. He listened patiently until I was finished and then gave me his usual pep talk: “Because it’s your job. Shut up and go do your job.”

Bill is the exception to many rules, not the least of which is that he’s right far more often than he’s wrong. As usual, he had a point. I was making too much out of this. I would go do my job, I decided, by taking my boss’s orders at face value. I sat down at my desk, turned on my computer, and began to research change. Over the next several years, I cataloged the data that describes how population has increased, how agriculture has intensified, how energy use has skyrocketed over the last half century. I accessed public databases and downloaded files of numbers and spreadsheets. I searched through the data for patterns across the decades of my own life. I set out to quantify global change in the most concrete and precise terms that I could apprehend, and I learned a lot by doing it.

This research became the foundation of a course that I taught many times. Each week during the semester, I’d pick up the chalk and teach a room full of students the numbers describ­ing how planet Earth had changed since I was a kid back in the 1970s. I taught them what has happened. Not what I think might happen. Not what I think should happen. I taught them the things that I had taught myself. And as I did my job, I finally began to understand why I was doing it: because only after we see where we are can we duly ask ourselves if this is where we want to be.

Right now, I see the country of my birth moving backward. It has dumped the Paris Agreement, it’s close to dismantling the Environmental Protection Agency, and the United States Department of Agriculture is in very bad shape. The United States Department of Energy, which funded my lab for more than a decade to study greenhouse gases, has shut down most of its work on climate change, and NASA is under pressure to do the same. I left the United States in 2016 and moved to Norway because I believe that my laboratory will have more support here and because I am worried about the future of science in America.

All of this has convinced me that it’s time to bring global change out of my classroom and into this book. Not because I am a scientist who thinks she’s right, but because I am an author who loves both words and numbers and a teacher who has something to say.

So if you’ll listen, I’ll tell you what happened to my world, to your world—to our world. It changed.