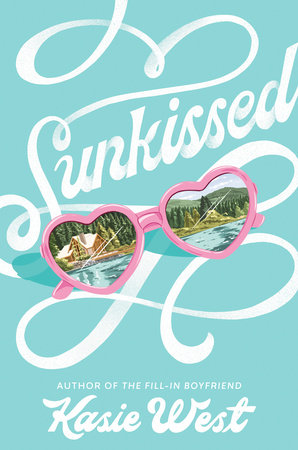 By Kasie West
On Sale 05.04.21
A lighthearted and swoony contemporary YA romance by fan-favorite author Kasie West about a girl who finds that a summer spent at a family resort isn't as bad as she imagined . . . and that falling in love is filled with heartache, laughter, and surprises!

Avery has always used music as an escape. But after her best friend betrays her, even her perfectly curated playlists can't help her forget what happened. To make matters worse, her parents have dragged her and her social-media-obsessed sister to a remote family camp for two months of "fun." Just when Avery is ready to give up on the summer altogether, she meets Brooks--mysterious, frustratingly charming Brooks--who just happens to be on staff--which means he's off-limits.

What starts as a disaster turns into. . . something else. As the outside world falls away, Avery embarks on a journey of self-discovery. And when Brooks offers her the chance of a lifetime, she must figure out how far is she willing to go to find out what she wants and who she wants to be.

Fan favorite Kasie West is back with another unforgettable summer romance that reminds us falling in love is full of wonder, heartache, and--most of all--surprises.
Read more
Read less
Read Excerpt
+ Add to My Bookshelf
+ Add to Goodreads

I took a breath and closed my eyes, letting the sun-­drenched glass warm me as I leaned my head against the car window. This was going to be a perfect summer. If I said it enough times, it would come true. After everything that had happened this week, I needed a good summer. The one before my senior year was mine to claim, Dad had said months ago. I was ready to claim it.

Up front, my parents had turned the radio to barely audible but I could just make out a Taylor Swift song. My AirPods had lost their charge ten minutes ago, rendering the remainder of my perfectly curated road trip playlist—­Stuck in the Backseat with You—­useless. As I felt myself drifting toward sleep, my sister’s voice rang out louder than necessary from beside me.

“Hey, viewers. Happy summer! We’re on hour four of our car ride and so ready to be done. Say hi to my older sister, Avery!”

Lauren had her elbows propped on the pillows between us and was holding up her phone, the camera facing me. Behind her phone, she gave a silent plea that said, Give me something, anything, aside from your normal boring face. Since boring was the face I was born with, I held up a peace sign, which apparently was good enough, because she flipped the recording back to her. “This year, the parents are taking us to the middle of the forest. Are you ready to join us?” She pointed the camera out the car window, the tall pine trees zooming by in a hazy blur.

The middle of the forest wasn’t exactly how I’d describe the four-­star family camp we’d be spending the summer at, but exaggeration is the key to any good social media video. I shook my AirPod case as if that would make them charge faster. I needed some noise-­canceling, head-­clearing music.

“Did you girls pack your swimsuits?” Mom asked, even though there was nothing we could do about it now, four hours from home, if we hadn’t.

Lauren dropped her hand. “Mom, I was recording.”

“I hear there’s a huge Slip ’N Slide at this camp,” Dad said, as if this was the most exciting thing a seventeen-­ and a fifteen-­year-­old could hear. “Supersized for super kids.” He laughed at his own joke, and I couldn’t help but laugh too.

Lauren gave me the Really? look, then said, “There’s real water, too, though, right?”

“A lake or something?”

“Yes, there’s a lake and a pool,” Dad responded as he took a curve too fast, pushing me against the door.

“I don’t know why we couldn’t just go to the camp we went to a couple years ago,” Lauren complained. “It was closer and the roads weren’t so windy.”

“Because this year is our epic adventure,” Dad said. “Next summer Avery will be so busy prepping for college she’ll boycott a family vacation.”

“So true,” I said, and smiled when my mom turned around to make sure she shouldn’t be offended. When she saw my face, she gave my leg a little slap.

Both my parents had summers off. Mom was a professor at UCLA and Dad taught sixth grade and coached middle-­school basket­ball. So most summers for as long as I could remember, we went on an “adventure.” Sometimes it was a cabin on the lake or a KOA near the beach. And most of the time, it really was an adventure. Sometimes even a good one.

My phone vibrated against my thigh on the seat next to me, and I immediately tensed. I didn’t want to look. I didn’t want to read more excuses. I was trying to start my perfect summer. It buzzed again. I sucked in a breath and looked at the screen. As I expected, it was from my best friend, Shay.

I’m sorry. I can’t go the whole summer knowing you’re mad at me. It was an accident.

I wasn’t sure how one accidentally kissed their best friend’s ex-­boyfriend. Trent and I had only been broken up for a couple weeks! I had even thought we might get back together. Now I wondered if Shay was the real reason we’d broken up in the first place. They obviously liked each other. I felt stupid for thinking Trent and I had just hit a rough spot and would work it out.

Another message popped up.

It was a big mistake. We were both just talking about how you were leaving for the whole summer and how much we were going to miss you! Please forgive me.

I put the phone, screen down, on the seat, as if the messages would go away if I couldn’t see them.

“Hello, everyone!” Lauren said again into her camera. “Time for our summer trek into a wooded forest. Trees and lakes and excitement. Hope you’re all ready to join me. Say hi, Avery.”

The recording was on me again. I could feel my eyes stinging from the texts. I clenched my teeth and willed myself to control the tears. Finally, I faced Lauren and puffed my cheeks out like a blowfish, a creature with a defense mechanism I could appreciate.

She lowered her phone and raised her eyebrows. “Can I post that?”

I honestly didn’t care what her fifty followers thought of me. Well, actually I did . . . and I hated myself for that. But she was giving me that pleading look again.

“Thank you!” Her eyes were back on her phone, watching the clip.

I turned my attention to the very-­much-­still-­there texts on my phone.

Shay had been my best friend since the summer before third grade, when she declared me such through a fence. She’d moved into the house behind us, and we’d met one day when her ball flew over the fence and directly into my head. I’d given her ball back, and after that we talked every day through a crack for weeks before we convinced our parents to let us actually hang out. And that’s how it had felt when she told me what happened with Trent: like a ball to the head all over again—­unexpected and embarrassing—­except without the happy ending.

My dad took another curve too fast.

I scooted closer to my window. The last thing I needed was a lapful of vomit.

Mom smacked Dad’s arm. “Slow down.” Then she turned in her seat. “Do you need a plastic bag?”

“Didn’t you take Dramamine?” I asked.

“Yes, Avery, I took Dramamine. But obviously it’s not helping.”

“You weren’t just asking. You were trying to say I had done something wrong.”

My sister and I weren’t exactly best friends, which was why she had no idea about my crappy week or the unanswered texts waiting on my phone. Nobody knew. “I’m sorry. That’s not what I meant.”

I caught my dad’s eye in the rearview mirror and he mouthed, “Fire and Ice.”

For the past couple years, Dad had taken to calling my sister and me Fire and Ice. We were opposites in nearly every way. Lauren was dramatic and over the top; I was chill and go with the flow. Lauren’s looks begged to be noticed. She was tall and strong and had bright blond hair and big blue eyes. She always seemed happy, even when she was being a total grump. I, on the other hand, was one of those people who blended in. I had plain brown hair and a normal build. My smile was nice but nothing that drew stares. I did like my eyes. They were hazel, and I could say a lot with my eyes. Even though we were opposites, I didn’t love the nickname (who wanted to be compared to ice?) but I loved my dad and I knew he thought it was cute and funny, so I did what any chill person would do—­ignored it.

“Pull over! Pull over!” Lauren screeched, unbuckling her seat belt.

Mom riffled around by her feet and Dad jerked the car to the right and stopped on the dirt shoulder. Mom held a plastic bag in the air just as my sister flung open the door, jumped out, and threw up all over the side of the road with loud, heaving retches. She was dramatic with everything she did, even barfing. She moaned, bracing her hands against her knees, waiting for another round.

Mom turned to Dad. “Not sure why you’re in such a hurry.”

“You know she gets sick when you take the curves like that.”

I looked down at my phone, still trying to decide how to respond.

It’s great! I typed. Now we can compare notes and buy him extra ChapStick. I immediately erased the text. Now was not the time for a dumb joke. It’s fine, I typed this time. We’ll be fine.

My finger hovered over the send button. Fine wasn’t how I felt. I felt betrayed and angry and confused and alone. I felt like I’d lost my best friend and my boyfriend in the same week. I wanted to give her the silent treatment for a while. But I hated feeling like this. I didn’t want to lose her. The sooner I forgave her, the sooner we could get past this.

The muffled sound of my sister’s voice drew my attention. With her back pressed against the window, she recorded another video. I couldn’t hear what she was saying, but it was probably something about throwing up. I didn’t understand her videos at all.