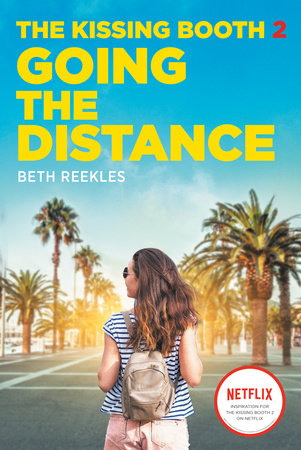 By Beth Reekles
THE SIZZLING SEQUEL TO THE KISSING BOOTH THAT INSPIRED THE NETFLIX FILM STARRING JOEY KING, JACOB ELORADI AND MOLLY RINGWALD!

Elle Evans seems to have finally tamed hotter-than-hot bad boy Noah Flynn, but now they're facing a new challenge. Noah's 3,000 miles away at Harvard, which means they're officially a long-distance couple - and it's tough. After all, there's only so much texts and calls can do- and when Elle sees a post which suggests Noah's getting friendly with someone else, she's devastated.

On top of that, it's hard to ignore new boy Levi. He's gentle, sweet, cute - and definitely interested in Elle.

With her heart on the line, what's a girl to do?

Join Elle, Noah, Lee and all your favorite Kissing Booth characters for another amazing romantic story that's sure to have you swooning.
Read more
Read less
Read Excerpt
+ Add to My Bookshelf
+ Add to Goodreads

Which YA Character Will You Kiss in the Kissing Booth?

Once the car door slammed shut behind me, I tilted back my head and let my eyes slide closed, drawing in a deep breath. The sun tickled my cheeks, and a smile played on my lips. The school smelled of freshly cut grass, and the air was filled with the bubbly chatter of teenagers running around the parking lot, meeting up with their classmates again after summer. Everybody always complained about how much they hated the first day of school—­I was sure that everyone secretly loved it, though.

There was just something about the new school year that meant new beginnings. Which was kind of ridiculous, because it was high school, but that didn’t stop it from feeling true.

I turned to Lee, my eyes open again now, and he shot me a grin.

It might have been a Monday morning, but I felt weightless. My smile mirrored his. “Senior year, here we come,” I replied softly.

If here was anything worth being excited about, I was sure that the start of senior year was it.

I’d heard people say that your college years were supposed to be the best years of your life—­but college sounded like it was going to be so much more hard work than high school, even if it did mean more freedom. Lee and I were convinced that senior year was the last year to really enjoy ourselves, before adulthood hit.

I moved around the car to lean against the hood, next to Lee. He’d always made a fuss about his precious car, the ’65 Mustang he cherished so dearly; hell, it practically sparkled.

“I can’t believe it’s finally here. I mean, think about it: this is our last first day of high school. This time next year, we’ll be at college. . . .”

Lee groaned. “Don’t remind me. I already had that speech off my mom this morning—­complete with tearful eyes. I don’t even want to think about college.”

Even though the thought of college applications made my stomach twist, too, I’d tried to work on my application essay over the summer but still hadn’t made any progress on it.

I didn’t even want to think about the possibility that Lee and I would end up at different colleges. That he’d get accepted somewhere I didn’t. That we might end up apart next year. We’d spent our entire lives practically joined at the hip. What the hell would I do without him around?

“Unfortunately,” Lee was saying, drawing me out of my thoughts. “Look, you’re not going to start waxing lyrical about the future or something, are you? Please say if you are. I’ll leave you to your thoughts and go find the guys.”

Playfully, I shoved my shoulder into his. “I’ll stop talking about college now. Promise.”

“Thank God for that.”

“Although, speaking of the guys—­has Cam told you anything about this new neighbor?”

“I’d almost forgotten about that.”

Cam, one of our closest friends since elementary school, had sprung the news on us last week that some guy had moved into the house opposite his, and since he was our age, Cam’s parents had suggested he take the new guy under his wing and introduce him to us—­and the way he’d said “suggested” made it sound like they’d given him an ultimatum about it.

Lee carried on. “I know he’s from Detroit. And his name’s Levi. Like the jeans. I don’t know much else about him, though. I don’t think Cam knows anything else about him either, really.” Then he stood up off the Mustang. “I’m just hoping he’s not a total asshat, since we promised Cam we’d try and help him fit in. Help Levi fit in, I mean.”

“I know what you mean,” I mumbled, but I was distracted by my cell phone, which had started to ring in my hands.

Lee’s gaze went to the caller ID, and he sighed. I looked up to give him an apologetic smile just in time to see him roll his eyes at me and start to stroll away, backpack slung over one shoulder.

“Oh, like you and Rachel never made out in the janitor’s closet!” I shot back. He just gave me a thumbs-­up over his shoulder.

I answered the phone. “Hey, Noah.”

Noah, Lee’s older brother, was half the reason I’d not made progress on my college application essay: after sneaking around with him behind Lee’s back for a couple months last spring (which ended in total disaster when Lee caught us kissing), and then officially dating him since the summer, we’d spent as much of our summer vacation together as possible. He was in college at the other end of the country now, at Harvard.

He’d been gone barely a couple weeks, and I couldn’t get over how much I missed him. How was I going to cope with not seeing him until Thanksgiving?

“Eh. Not much different from when I called you last night. I had class this morning. Math. It was pretty interesting. Second-­order differentials.”

“I have no idea what you’re talking about, and I don’t think I want to know.”

Noah laughed, a soft breathy sort of chuckle that made my heart melt. Almost everything about him made my heart melt or my knees go weak or my stomach fill with butterflies. I was a goofball, a cliché straight out of a movie. And it felt great.

I missed that laugh as much as I missed feeling his arms wrapped around me or his lips on mine. We spoke all the time—­video chat, Snapchat, messages, good old-­fashioned phone calls . . . but it wasn’t the same. And I was a little cautious about letting on just how badly I missed him, in case it made me sound too clingy. I still wasn’t really sure how to go about all this relationship stuff.

I’d never thought of Noah as a nerd. I mean, he’s smart. He’d had a 4.7 GPA (his mom had told me that recently—­I’d known he was smart but hadn’t realized how smart before now). He’d narrowly missed out on being top of his class, yet he had a reputation all through high school as the resident bad boy. Up until we got together, I’d never really thought that underneath his image, he might actually like learning stuff like second-­order differentials. Whatever they were.

“Shh, someone might hear you.” I could hear the smirk in his voice. “Anyway, enough about me. I talked to you for, like, an hour straight last night about college. I just wanted to wish you luck for your first day of senior year.”

I smiled, even though he couldn’t see. “Well, thanks. I appreciate it.”

“So, what’s it feel like? Being the big kids in school?”

“Kind of scary, kind of nauseating, and a lot exciting. I’m trying not to get too stressed out about college and stuff.”

“Thinking about college makes me feel grown up when I feel anything but a grown-­up. I mean, my kid brother had to come kill a spider in my room last night.”

“Tell me about it. I had to ask someone how to use the dryer in the laundry rooms the other day. I felt so stupid.”

“My mom is very particular about how the laundry should be done, Shelly; you know that.” I did—­she’d asked Lee to spread sheets to dry once, when she went out, only to redo them as soon as she got back. She didn’t ask him to do them again. “Besides, those four teddy bears on your bed probably don’t help with the not-­feeling-­like-­an-­adult.”

“I bet there are a bunch of girls at college—­some guys, too, probably—­who have a teddy bear or two on their beds.”

“Hey, now, don’t you say a word against Mr. Wiggles.” I couldn’t help but let a pout slip onto my face. “Anyway, you’re the one with Superman boxer shorts.”