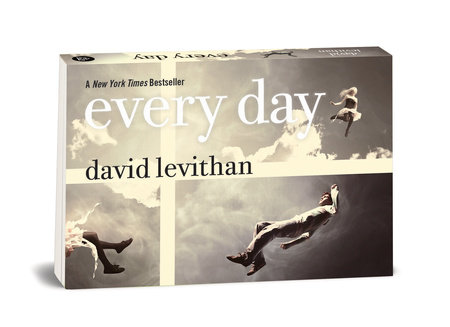 By David Levithan On Tour
The New York Times bestseller Every Day in a groundbreaking new mini format, perfect for on-the-go reading!

Every day, A wakes up in the body of a different person. There's never any warning about where it will be or who it will be. A has made peace with that, even established guidelines by which to live: Never get too attached. Avoid being noticed. Do not interfere.

It's all fine until the morning A wakes up in the body of Justin and meets Justin's girlfriend, Rhiannon. From that moment, the rules by which A has been living no longer apply. Because finally A has found someone he wants to be with--day in, day out, day after day.

"A story that is always alluring, oftentimes humorous and much like love itself-- splendorous." --Los Angeles Times

Random Minis are super-light, cellphone-sized, unabridged books made to fit into a pocket or one hand without sacrificing readability. Other titles include All the Bright Places by Jennifer Niven, Dear Martin by Nic Stone, Everything, Everything by Nicola Yoon, I Am Not Your Perfect Mexican Daughter by Erika Sánchez, and We Were Liars by E. Lockhart.
Read more
Read less
Read Excerpt
+ Add to My Bookshelf
+ Add to Goodreads

Immediately I have to figure out who I am. It’s not just the body--opening my eyes and discovering whether the skin on my arm is light or dark, whether my hair is long or short, whether I’m fat or thin, boy or girl, scarred or smooth. The body is the easiest thing to adjust to, if you’re used to waking up in a new one each morning. It’s the life, the context of the body, that can be hard to grasp.

The information is there. I wake up, open my eyes, understand that it is a new morning, a new place. The biography kicks in, a welcome gift from the not‑me part of the mind. Today I am Justin. Somehow I know this--my name is Justin--and at the same time I know that I’m not really Justin, I’m only borrowing his life for a day. I look around and know that this is his room. This is his home. The alarm will go off in seven minutes.

I’m never the same person twice, but I’ve certainly been this type before. Clothes everywhere. Far more video games than books. Sleeps in his boxers. From the taste of his mouth, a smoker. But not so addicted that he needs one as soon as he wakes up.

“Good morning, Justin,” I say. Checking out his voice. Low. The voice in my head is always different.

Justin doesn’t take care of himself. His scalp itches. His eyes don’t want to open. He hasn’t gotten much sleep.

Already I know I’m not going to like today.

It’s hard being in the body of someone you don’t like, because you still have to respect it. I’ve harmed people’s lives in the past, and I’ve found that every time I slip up, it haunts me. So I try to be careful.

From what I can tell, every person I inhabit is the same age as me. I don’t hop from being sixteen to being sixty. Right now, it’s only sixteen. I don’t know how this works. Or why. I stopped trying to figure it out a long time ago. I’m never going to figure it out, any more than a normal person will figure out his or her own existence. After a while, you have to be at peace with the fact that you simply are. There is no way to know why. You can have theories, but there will never be proof.

I can access facts, not feelings. I know this is Justin’s room, but I have no idea if he likes it or not. Does he want to kill his parents in the next room? Or would he be lost without his mother coming in to make sure he’s awake? It’s impossible to tell. It’s as if that part of me replaces the same part of whatever person I’m in. And while I’m glad to be thinking like myself, a hint every now and then of how the other person thinks would be helpful. We all contain mysteries, especially when seen from the inside.

The alarm goes off. I reach for a shirt and some jeans, but something lets me see that it’s the same shirt he wore yesterday. I pick a different shirt. I take the clothes with me to the bathroom, dress after showering. His parents are in the kitchen now. They have no idea that anything is different.

Sixteen years is a lot of time to practice. I don’t usually make mistakes. Not anymore.

I read his parents easily: Justin doesn’t talk to them much in the morning, so I don’t have to talk to them. I have grown accustomed to sensing expectation in others, or the lack of it. I shovel down some cereal, leave the bowl in the sink without washing it, grab Justin’s keys and go.

Yesterday I was a girl in a town I’d guess to be two hours away. The day before, I was a boy in a town three hours farther than that. I am already forgetting their details. I have to, or else I will never remember who I really am.

Sometimes I can’t go through these motions. I can’t bring myself to go to school, maneuver through the day. I’ll say I’m sick, stay in bed and read a few books. But even that gets tiresome after a while, and I find myself up for the challenge of a new school, new friends. For a day.

As I take Justin’s books out of his locker, I can feel someone hovering on the periphery. I turn, and the girl standing there is transparent in her emotions--tentative and expectant, nervous and adoring. I don’t have to access Justin to know that this is his girlfriend. No one else would have this reaction to him, so unsteady in his presence. She’s pretty, but she doesn’t see it. She’s hiding behind her hair, happy to see me and unhappy to see me at the same time.

Her name is Rhiannon. And for a moment--just the slightest beat--I think that, yes, this is the right name for her. I don’t know why. I don’t know her. But it feels right.

This is not Justin’s thought. It’s mine. I try to ignore it. I’m not the person she wants to talk to.

“Hey,” she murmurs back.

She’s looking at the floor, at her inked‑in Converse. She’s drawn cities there, skylines around the soles. Something’s happened between her and Justin, and I don’t know what it is. It’s probably not something that Justin even recognized at the time.

I see the surprise on her face, even as she tries to cover it. This is not something that Justin normally asks.

And the strange thing is: I want to know the answer. The fact that he wouldn’t care makes me want it more.

“Sure,” she says, not sounding sure at all.

I find it hard to look at her. I know from experience that beneath every peripheral girl is a central truth. She’s hiding hers away, but at the same time she wants me to see it. That is, she wants Justin to see it. And it’s there, just out of my reach. A sound waiting to be a word.

She is so lost in her sadness that she has no idea how visible it is. I think I understand her--for a moment, I presume to understand her--but then, from within this sadness, she surprises me with a brief flash of determination. Bravery, even.

Shifting her gaze away from the floor, her eyes matching mine, she asks, “Are you mad at me?”

I can’t think of any reason to be mad at her. If anything, I am mad at Justin, for making her feel so diminished. It’s there in her body language. When she is around him, she makes herself small.