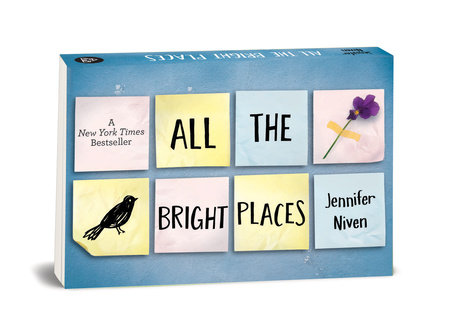 Random Minis: All the Bright Places

By Jennifer Niven
The New York Times bestseller All the Bright Places in a groundbreaking new mini format, perfect for on-the-go reading!

Theodore Finch is fascinated by death. Every day he thinks of ways he might die, but every day he also searches for--and manages to find--something to keep him here, and alive, and awake.

Violet Markey lives for the future, counting the days until graduation, when she can escape her small Indiana town and her aching grief in the wake of her sister's death. When Finch and Violet meet on the ledge of the bell tower at school--six stories above the ground--it's unclear who saves whom. Soon it's only with Violet that Finch can be himself. And it's only with Finch that Violet forgets to count away the days and starts living them. But as Violet's world grows, Finch's begins to shrink. . . .

All the Bright Places is a heart-wrenching, unflinching story of love shared, life lived, and two teens who find each other while standing on the edge.

Random Minis are super-light, cellphone-sized, unabridged books made to fit into a pocket or one hand without sacrificing readability. Other titles include Every Day by David Levithan, Dear Martin by Nic Stone, Everything, Everything by Nicola Yoon, I Am Not Your Perfect Mexican Daughter by Erika Sánchez, and We Were Liars by E. Lockhart.
Read more
Read less
Read Excerpt
+ Add to My Bookshelf
+ Add to Goodreads

Random Minis: All the Bright Places

Is today a good day to die?

This is something I ask myself in the morning when I wake up. In third period when I'm trying to keep my eyes open while Mr. Schroeder drones on and on. At the supper table as I'm passing the green beans. At night when I'm lying awake because my brain won't shut off due to all there is to think about.

Is today the day?

I am asking myself this now as I stand on a narrow ledge six stories above the ground. I'm so high up, I'm practically part of the sky. I look down at the pavement below, and the world tilts. I close my eyes, enjoying the way everything spins. Maybe this time I'll do it--let the air carry me away. It will be like floating in a pool, drifting off until there's nothing.

I don't remember climbing up here. In fact, I don't remember much of anything before Sunday, at least not anything so far this winter. This happens every time--the blanking out, the waking up. I'm like that old man with the beard, Rip Van Winkle. Now you see me, now you don't. You'd think I'd have gotten used to it, but this last time was the worst yet because I wasn't asleep for a couple days or a week or two--I was asleep for the holidays, meaning Thanksgiving, Christmas, and New Year's. I can't tell you what was different this time around, only that when I woke up, I felt deader than usual. Awake, yeah, but completely empty, like someone had been feasting on my blood. This is day six of being awake again, and my first week back at school since November 14.

I open my eyes, and the ground is still there, hard and permanent. I am in the bell tower of the high school, standing on a ledge about four inches wide. The tower is pretty small, with only a few feet of concrete floor space on all sides of the bell itself, and then this low stone railing, which I've climbed over to get here. Every now and then I knock one of my legs against it to remind myself it's there.

My arms are outstretched as if I'm conducting a sermon and this entire not-very-big, dull, dull town is my congregation. "Ladies and gentlemen," I shout, "I would like to welcome you to my death!" You might expect me to say "life," having just woken up and all, but it's only when I'm awake that I think about dying.

I am shouting in an old-school-preacher way, all jerking head and words that twitch at the ends, and I almost lose my balance. I hold on behind me, happy no one seems to have noticed, because, let's face it, it's hard to look fearless when you're clutching the railing like a chicken.

"I, Theodore Finch, being of unsound mind, do hereby bequeath all my earthly possessions to Charlie Donahue, Brenda Shank-Kravitz, and my sisters. Everyone else can go f---- themselves." In my house, my mom taught us early to spell that word (if we must use it) or, better yet, not spell it, and, sadly, this has stuck.

Even though the bell has rung, some of my classmates are still milling around on the ground. It's the first week of the second semester of senior year, and already they're acting as if they're almost done and out of here. One of them looks up in my direction, as if he heard me, but the others don't, either because they haven't spotted me or because they know I'm there and Oh well, it's just Theodore Freak.

Then his head turns away from me and he points at the sky. At first I think he's pointing at me, but it's at that moment I see her, the girl. She stands a few feet away on the other side of the tower, also out on the ledge, dark-blond hair waving in the breeze, the hem of her skirt blowing up like a parachute. Even though it's January in Indiana, she is shoeless in tights, a pair of boots in her hand, and staring either at her feet or at the ground--it's hard to tell. She seems frozen in place.

In my regular, nonpreacher voice I say, as calmly as possible, "Take it from me, the worst thing you can do is look down."

Very slowly, she turns her head toward me, and I know this girl, or at least I've seen her in the hallways. I can't resist: "Come here often? Because this is kind of my spot and I don't remember seeing you here before."

She doesn't laugh or blink, just gazes out at me from behind these clunky glasses that almost cover her face. She tries to take a step back and her foot bumps the railing. She teeters a little, and before she can panic, I say, "I don't know what brings you up here, but to me the town looks prettier and the people look nicer and even the worst of them look almost kind. Except for Gabe Romero and Amanda Monk and that whole crowd you hang out with."

Her name is Violet Something. She is cheerleader popular--one of those girls you would never think of running into on a ledge six stories above the ground. Behind the ugly glasses she's pretty, almost like a china doll. Large eyes, sweet face shaped like a heart, a mouth that wants to curve into a perfect little smile. She's a girl who dates guys like Ryan Cross, baseball star, and sits with Amanda Monk and the other queen bees at lunch.

"But let's face it, we didn't come up here for the view. You're Violet, right?"

She blinks once, and I take this as a yes.

"Theodore Finch. I think we had pre-cal together last year."

"I hate math, but that's not why I'm up here. No offense if that's why you are. You're probably better at math than I am, because pretty much everyone's better at math than I am, but it's okay, I'm fine with it. See, I excel at other, more important things--guitar, sex, and consistently disappointing my dad, to name a few. By the way, it's apparently true that you'll never use it in the real world. Math, I mean."

I keep talking, but I can tell I'm running out of steam. I need to take a piss, for one thing, and so my words aren't the only thing twitching. (Note to self: Before attempting to take own life, remember to take a leak.) And, two, it's starting to rain, which, in this temperature, will probably turn to sleet before it hits the ground.

"It's starting to rain," I say, as if she doesn't know this. "I guess there's an argument to be made that the rain will wash away the blood, leaving us a neater mess to clean up than otherwise. But it's the mess part that's got me thinking. I'm not a vain person, but I am human, and I don't know about you, but I don't want to look like I've been run through the wood chipper at my funeral."

She's shivering or shaking, I can't tell which, and so I slowly inch my way toward her, hoping I don't fall off before I get there, because the last thing I want to do is make a jackass out of myself in front of this girl. "I've made it clear I want cremation, but my mom doesn't believe in it." And my dad will do whatever she says so he won't upset her any more than he already has, and besides, You're far too young to think about this, you know your Grandma Finch lived to be ninety-eight, we don't need to talk about that now, Theodore, don't upset your mother.