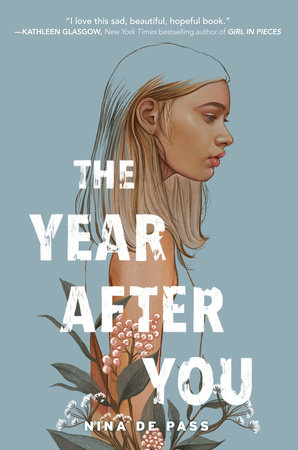 By Nina de Pass
"I love this sad, beautiful, hopeful book." --Kathleen Glasgow, New York Times bestselling author of Girl in Pieces and How to Make Friends With the Dark

For fans of Nina LaCour and Jennifer Niven, a richly layered novel that's both uplifting and heartbreaking, about piecing yourself together after loss and the dark truths we choose to keep from each other and ourselves.

Nine months later, Cara is still struggling, consumed by grief and a dark secret she'd rather forget. In the hopes of offering a fresh start, her mother sends her to boarding school in Switzerland, a place where no one knows what happened--and where they never will, if Cara can help it.

But her new classmates Ren and Hector won't let her close herself off. They are determined to break down the walls she has so carefully built up. And maybe Cara wants them to . . . especially Hector, who seems to understand her like no one else does.

The problem is that the closer Cara gets to Hector, the more G slips away. If moving on means letting go of the past--and admitting what she did that night--Cara's not sure how. But a second chance awaits, if she can only find the strength within herself.

"Transportive and redemptive, this is a gentle story about the universality of grief, the beauty of self-forgiveness, and how new friendship can help heal old wounds."--Ashley Woodfolk, author of The Beauty That Remains and When You Were Everything

"A good choice for readers who enjoyed Stephanie Perkins's Anna and the French Kiss and Gayle Forman's If I Stay."--SLJ
Read more
Read less
Read Excerpt
+ Add to My Bookshelf
+ Add to Goodreads

If I’d known the temperature in exile would be this low, I’d have found it within me to put up more of a fight. Even if there was anyone to hear me now, the time for protest has come and gone; I’m a very long way from home.

I allow the minutes to pass, watching as the soft, sticky snow is caught in the wind outside the taxi and, on its descent, is forced back high into the air.

The driver my mother arranged to meet me at the airport, perhaps mistaking my silence for fascination, seems to decide it’s safe to speak. “Excited for your new school?” he asks, the words barely decipherable through his thick French accent.

I don’t reply at once, allowing my finger to slide across the misted glass of the window. When I eventually do, I don’t bother to curb the sarcasm in my voice, knowing that the language barrier will mask it anyway. “Excited?”

I don’t know why I phrase my response as a question. I don’t want to invite him to have a conversation with me, or for anything he says to be memorable. I want to forget him, just like I want to forget everything else.

He laughs nervously before continuing. “Is it your first time in Switzerl—­”

The end of his question is lost. I watch in horror as he swerves out of the path of an oncoming truck and closer to the edge of the winding, narrow road up the mountainside. There are no barriers to the waiting abyss below, and I feel my body tense as I clutch at the door handle. Every muscle turns to glass as the car, losing its grip on the icy road, coasts to the right. I close my eyes, waiting for impact. Time converts to slow motion, and I wait to hear the screams. For the world to blur out of focus. For the earsplitting pop of the airbags deploying. For the pain.

For a split second, I feel euphoric. Maybe I won’t survive this time.

Instead, I feel the car veer back to the left, away from danger, and am drawn into real time as the driver resumes his nervous laugh. He sounds the horn too late, when the truck is a dot in the distance, and I catch him looking at me in the rearview mirror. “Crazy drivers,” he says with a repentant smile.

I don’t smile back, anxiously tracing my fingers over the frayed edges of the seat belt, and find my most unforgiving stare. “Just keep your eyes on the road,” I snap.

In the hour that follows, the driver tries again to engage me in conversation, but this time I ignore him, not bothering to disguise my hostility. I keep my eyes off the encircling Swiss mountains, focusing on bringing all my fear-­frozen limbs back to life. Trying not to think about what could have happened. Or about the part of me that momentarily welcomed it.

My mind is filled instead with a memory from eight months ago, when I woke up one morning in the hospital back in California to the sound of voices. My mother and one of the nurses were trying—­not particularly well—­to speak in hushed tones.

“Cara’s psychiatrist, Dr. Burns, wants us to keep her in for a few more nights to observe her,” the nurse said.

My mother, probably irritated by the inconvenience of my prolonged stay (the hospital was over an hour from where we lived), responded sulkily. “Why on earth would she need to stay? Her injuries are physical and, as the doctor said again this morning, relatively minor. The fact that she escaped with just a broken arm is a miracle in itself. But she did—­now that she’s healthy enough to go home, that’s where she’s going.”

“Mrs. Blair,” my mother interrupted—­as she always does when people call her by my father’s name. It took her no time at all to remarry after my father left, and even in the interim months, as I like to call them, she reverted to her maiden name.

“Sorry, Mrs. Blair,” the nurse continued, “but Dr. Burns isn’t convinced that Cara is healthy. She’s concerned that your daughter is having suicidal thoughts.”

I can almost imagine my mother’s eyes widening in horror at this, her glancing around to check no one we knew was in the vicinity. “My daughter is not suicidal!”

To her credit, the nurse’s voice remained steady. “It wouldn’t be surprising if she were suffering from a form of post-­traumatic stress disorder. Cara has lived through a very distressing experience.”

There was a long pause while my mother digested the nurse’s words.

“I know what it is. I just don’t want to hear any more,” my mother cut in. “I am her legal guardian, so give me whatever forms I need to get her out of this place. Mental illness. Honestly. She’s in shock, not mentally ill.”

“It would be against medical advice,” the nurse warned. “You’d have to sign a waiver.”

My mother’s response was curt, all attempts at whispering put aside. “Then get me that waiver.”

In retrospect, two elements of this exchange stand out. Firstly, that my injuries were described as physical. The physical pain of breaking my arm in four places was nothing compared to the other pain I experience daily when I remember what else was broken that night—­something metal bolts can’t fix. Secondly, that this injury and the endless web of bruises that covered my body were described as minor. Nothing about the accident felt minor, and calling it so felt as though they were belittling it, making it seem as though it, in the grand scheme of things, didn’t matter.

My eyes stay glued to the seat in front. I don’t want to risk looking out again at the scene whipping past the windows. The fact that I have gotten this far in my journey is a near miracle. Even so, I’m at the limits of my endurance and am relieved when I register the car slowing. As soon as we stop, I fling myself out into the open, hiding my hands behind my back so the driver won’t see they’re still shaking.

“Your destination,” he says, gesturing up to the large building.

It looks more like a Russian palace than a school: a flat-­fronted, sky-­blue façade of a building of at least six stories, with three golden domes on the roof. There are crumbling touches of the same gold paint around symmetrical, old-­fashioned windows, and on the ground-­floor level, mint-­green and white-­striped awnings protrude. I turn around, with the extravagant structure behind me, and look out at the view. There is a cable-­car station to my right. I follow the wire supporting the still, suspended ­carriages until it is swallowed by a small town on a nearby mountain­side.

Now that my feet are firmly on solid ground, the descent between the two peaks doesn’t feel quite so perilous. The school itself does feel like a slight safety hazard, though; it’s dangerously close to the edge of the mountain, with just a waist-­high pale blue iron fence to keep everyone penned in. Even then, as I notice the elaborate twists of the metal, it feels more like a decorative feature than a precautionary one.

“Should I bring this in for you?” the driver asks as he unloads my luggage.

“I’m fine,” I say quickly, pulling the one duffel bag I brought with me from his grasp and hauling it over my shoulder. At the last minute I look back and murmur a hesitant “Thanks.”

He looks startled, so I turn away from him and head toward the entrance. As I get closer, two figures come into focus: a girl and a boy of around my age. The girl has a long stream of dark red hair that falls below her shoulders. Her skin is fair, like mine, but covered with freckles. The boy at her side is at least a head taller and lanky, but with a round, childish face and white-­blond hair.

“Let me take that,” the boy says, gesturing to my bag. His words sound strange and unfamiliar, tinted with another accent—­perhaps something Scandinavian.

“I’ve got it,” I say, then instantly regret it. This is exactly what my mother warned me not to do. It’ll be a clean slate for you, she reasoned. Nobody will know you there—­you can go back to being yourself again. Her words had extinguished what was left of my fight. Surely she knows as well as I do that there is no going back. Yet now, despite the fact that I can’t fathom how I’ll pull it off, I resolve to try to seem normal in front of these strangers. I can’t smile, so I adjust my expression to the brightest one I know.