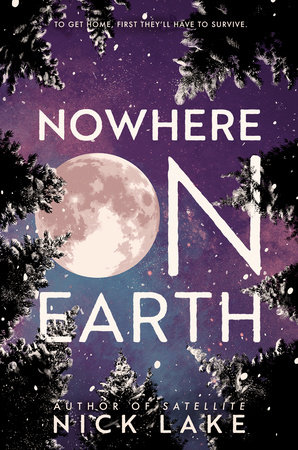 By Nick Lake
From the Printz Award-winning author of Satellite comes a compelling new novel about a girl who must brave the elements to help a lost child with an otherworldly secret.

Sixteen-year-old Emily is on the run. Between her parents and the trouble she's recently gotten into at school, she has more than enough reason to get away. But when she finds a little boy named Aidan wandering in the woods, she knows she needs to help him find his way home. But getting home is no easy matter, especially when Emily finds out that Aidan isn't even from Earth. When their plane crashes into the side of a snowy mountain, it's up to Emily to ensure Aidan and their pilot, Bob, make it off the mountain alive. Pursued by government forces who want to capture Aidan, the unlikely team of three trek across the freezing landscape, learning more about each other, and about life, than they ever thought possible.

"I love Nick Lake's writing. I would read anything he wrote--grocery list, email, etc.--because his writing, always, is so real and brave. He takes on subjects other writers might avoid, and he writes the hell out of them." --New York Times bestselling author Jennifer Niven on Nick Lake
Read more
Read less
Read Excerpt
+ Add to My Bookshelf
+ Add to Goodreads

Emily saw the mountainside only a moment before the small plane crashed into it. They were in thick fog; and then there was only whiteness, and noise, and pain. Before, Emily had always associated the color white with peace, with a kind of benign erasure. Snow smoothing out the angles of her lame little town. After that moment, she didn’t.

She felt no fear. Her life did not flash in front of her eyes; she didn’t see the things most important to her parade past, perhaps because they had already been taken away. No: her body was simply flooded with adrenaline: fight-­or-­flight response—­though there was nothing for her to fight and nowhere to fly to, not anymore.

There was: the screaming of metal on metal, the shock that emptied her lungs, the white snow breaking in through the windows, the impact of her head on something, perhaps the side of the plane. It was a De Havilland Otter fitted with floats. This, thought Emily, was the kind of useless information she would take to the grave. Not that she would necessarily have a grave. Even with modern technology, it was possible they would never be found.

And then: the realization.

She panicked, flailed, tried to catch his hand—­the little boy, her brother. But her fingers closed on nothing.

Then, after the whiteness, the blackness.

Emily blinked back into light.

Part of a tree was sticking through the broken window; a cedar, she noticed uselessly. Her head was throbbing. She brought a hand up to it. Her temple and cheek were sticky with blood.

“Emily!” said a voice. The voice of a young boy, from behind her, oddly muffled. “Emily!”

Instinctively, she rose to stand and was roughly pulled back. She wrestled with the buckle on her seat belt, but it was bent and twisted away from her in the strange, unrecognizable new contours of the plane.

She looked around. There: on the seat next to her were shards of glass from the broken window. She picked one up and used it to saw at her belt.

She cursed the restraint. The glass cut her—­not badly, but slippery blood loosened her grip on it. “Coming. Coming,” she said. Then the belt frayed and came apart. She lowered herself to the floor—­nothing in her body seemed broken, but she couldn’t be sure—­and crawled into the aisle. Aidan. Aidan was the priority.

That was when she saw: the back of the plane was gone. There was only a vast round hole, the tears in the fabric of the aircraft revealing—­in a way that was somehow disturbing over and above the fact of the crash—­the insulation material inside the layers of metal. It opened a hole in her heart too. Wind whistled through. The rearmost row of seats was nowhere to be seen. The incline of the aisle continued uninterrupted into the downslope of the mountain, all low pines pooled with snow and deepening shadow.

It was still daylight, just, but up here, this far north and at this time of year, the night always folded itself into the day, swirled together with it. Time was a murky concept, the day an endless dusk, so it was hard to tell what time it was.

In reality, only a moment had passed since the plane had crashed—­she thought. She had a concussion—­she thought. She struggled to her feet and inched down the aisle. She noticed that she couldn’t really hear her own movements. She looked into the row of seats behind her, where her little brother had been.

She swallowed a gasp, inaudible to her, like most everything else, her head jerking, casting her eyes around. But she’d heard him. She’d heard him, hadn’t she?

He was at the back, near the snow, a little dark bundle in his black puffy jacket. She hadn’t buckled him in. She’d done her own belt automatically but not his. Stupid. Selfish. She half walked, half slid down to him, past random boxes and packages. The plane was mostly a kind of unofficial mail service.

The soft confusion of hood and collar resolved itself as he turned and looked up at her. His eyes were huge, his skin pale. Looking to her for reassurance.

Emily kneeled. The floor of the plane had cracked, and like two tectonic plates sliding against each other, one part had pushed and jutted up over the other. Aidan’s leg was caught in the gap between the old floor and its new, violent configuration.

Emily had seen a YouTube video once of a woman lifting a car off a toddler—­but when she took the slanted floor and tried to raise it higher, it didn’t move at all. Aidan didn’t scream, but he sort of whimpered. Muscles she didn’t know she had—­and she knew her muscles well—­tightened around her heart.

“It’s OK,” she said. “It’s going to be OK.” Her voice was damped, as if wrapped in snow. Flakes of it were whirling in through the hole where the plane’s tail had been.

She saw a protruding metal bar, part of what had been the frame of a pair of seats. She pried it away from the rest of the structure, one end of it flattened, but still hard, still long.

“I’m going to lever the floor up,” she said.

Aidan nodded. His pupils were large; frightened; animal. But at least they were both the same size. In Emily’s ballet class back in Minnesota, a girl had fallen during a lift and hit her head, knocking herself out. Matching pupils were the first thing the paramedics had checked for.

She wedged one end of the bar into the gap, pushed it down as hard as she could, and was more shocked than she should have been when it met with a hard, jarring resistance she recognized as belonging to half-­frozen earth. The ground under the plane. Then she leaned all her weight on the other end of the bar, and with a creak she felt more than heard, the raised section of floor lifted.

Aidan scooted out, and as soon as he was clear, she dropped the bar and pulled him close. “Your leg?”

He touched it experimentally. “Fine, I think. There’s a ringing in my head. Like a bell that won’t stop.”

She pulled him to the side of the plane so they were sitting against the curve of it. He was light, small, easily movable.

“Will the plane explode?” he asked. His head came up only to her shoulder.

“I’ve seen that happen in movies,” he said.

“Yes.” She paused. “But it’s snowing out there and, like, minus ten. In here we’re sheltered at least. A little.”

He looked skeptically at the snow dusting their clothes. “A very little.”

A part of Emily’s mind marveled at itself—­calmly weighing the risk of being blown up against the risk of hypothermia. If only Miss Brady could see her now. Thinking of Miss Brady made her think of that last day at school: the orange and blue flames licking up the locker-­room walls; the sirens; the sparks snowing, glowing red, into the sky.