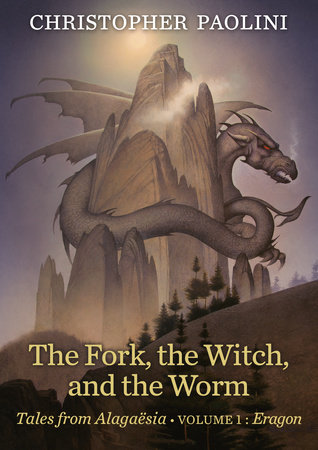 By Christopher Paolini On Tour
The internationally bestselling fantasy sensation is back, with brand-new stories set in the world of Eragon and the Inheritance Cycle!

A wanderer and a cursed child. Spells and magic. And dragons, of course. Welcome back to the world of Alagaësia.

It's been a year since Eragon departed Alagaësia in search of the perfect home to train a new generation of Dragon Riders. Now he is struggling with an endless sea of tasks: constructing a vast dragonhold, wrangling with suppliers, guarding dragon eggs, and dealing with belligerent Urgals and haughty elves. Then a vision from the Eldunarí, unexpected visitors, and an exciting Urgal legend offer a much-needed distraction and a new perspective.

This volume features three original stories set in Alagaësia, interspersed with scenes from Eragon's own unfolding adventure. Included is an excerpt from the memoir of the unforgettable witch and fortune-teller Angela the herbalist . . . penned by Angela Paolini, the inspiration for the character, herself!

Relish the incomparable imagination of Christopher Paolini in this thrilling new collection of stories based in the world of the Inheritance Cycle. Includes four new pieces of original art by the author.
Read more
Read less
Read Excerpt
+ Add to My Bookshelf
+ Add to Goodreads

By Christopher Paolini
The day had not gone well.

Eragon leaned back in his chair and took a long drink of blackberry mead from the mug by his hand. Sweet warmth blossomed in his throat, and with it memories of summer afternoons spent picking berries in Palancar Valley.

A pang of homesickness struck him.

The mead had been the best thing to come out of his meeting with Hruthmund, the dwarven representative. A gift to strengthen the bonds of friendly association between dwarves and ­Riders—­or so Hruthmund had claimed.

Eragon snorted. Some friendship. He’d spent the whole meeting arguing with Hruthmund over when the dwarves would deliver the supplies they’d promised. Hruthmund seemed to believe once every three to four months was more than sufficient, which was absurd considering the dwarves lived closer to the Academy than any of the other races. Even Nasuada had managed to send monthly shipments from the other side of the Hadarac Desert, far to the west.

I’ll have to arrange a talk with Orik and sort it out with him directly. Just one more thing to do amid a seemingly endless sea of tasks.

Eragon eyed the mounds of scrolls, books, maps, and loose pieces of parchment that covered the desk in front of him, all of which required his attention. He sighed, finding the sight depressing.

He shifted his gaze out the large, rough-­hewn windows that fronted the eyrie. Rays of evening light streamed across the windswept plains that lay below, surrounding Mount Arngor. To the north and west, the Edda River gleamed like a ribbon of beaten silver draped across the landscape. A pair of ships lay docked along the nearest bend, and from that docking, a trail led south to the foothills piled about the base of Arngor.

The mountain had been Eragon’s choice— ­in consultation with Saphira and their traveling companions—­for the Dragon Riders’ new home. It was more than that too: a safeguard for the Eldunarí and, hopefully, a nesting ground for the next generation of dragons.

The high, slab-­sided peak was a trailing remnant of the Beor Mountains, shorter than those towering giants but still many times bigger than the mountains of the Spine Eragon had grown up with. It stood alone in the green expanse of the eastern reaches, two weeks of slow sailing beyond the bounds of Alagaësia proper.

South of Arngor the land was rumpled like a blanket and ruffled with trees whose leaves shone silver in the wind, bright as the scales of a fish. Farther to the east stood scarps and cliffs and huge, flat-­topped pillars of stone crested with piles of vegetation. Among them lived groups of wandering tribes: strange, half-­wild humans the likes of which Eragon had never encountered before. So far they had proven no trouble, but he remained wary.

Such was his responsibility now.

The mountain bore many names. Arngor was Dwarvish for White Mountain, and indeed, the upper thirds were clad in snow and ice and—­from a distance—­the peak glowed with a startling brilliance amid the verdant plains. But it also had an older, secret name in Dwarvish. For as the expedition Eragon led had begun to settle among the foothills of the mountain, they had discovered tunnels burrowed into the stone beneath, and there in runes inscribed Gor Narrveln, which meant Mountain of Gems. Some ancient clan or tribe of dwarves had sunk mines deep into the roots of the peak.

The dwarves who had joined Eragon’s group had been excited by the discovery, and they spent much time debating who had made the mines and what gems might still be found.

In the ancient language, the mountain was known as Fell Thindarë, which meant Mountain of Night. The elves could not tell Eragon where the name came from—­nor the reason for it—­so he rarely used it. But he also heard them refer to the peak as Vaeta, or Hope. He found this fitting, as the Dragon Riders were a hope for all the races of Alagaësia.

The Urgals had their own name for the peak: Ungvek. When Eragon asked them what it meant, they claimed it was Strong-­Headed. But he wasn’t so sure.

Then too there were the humans. Eragon had heard them use all of the names interchangeably, as well as refer to the mountain as Hoarspike, a term he suspected the traders often used in jest.

Personally, Eragon preferred the sound of Arngor, but he gave each of the names the respect they were due. The confusion surrounding them embodied the situation at the Academy: the place was a mix of races and cultures and conflicting agendas, and all of them still unsettled. . . .

He took another sip of the Mûnnvlorss mead; that was how Hruthmund had named the bottle. Mûnnvlorss. Eragon turned the name over on his tongue, feeling the shape of it as he attempted to pick out the meaning.

There had been other problems throughout the day, not just the meeting with Hruthmund. The Urgals had been belligerent as always. The humans fractious. The dragons in their Eldunarí enigmatic. And the elves . . . the elves were elegant and efficient and polite to a fault, but once they made a decision, they would not or could not change their minds. Dealing with them had proven far more frustrating than Eragon had anticipated, and the more time he spent around them, the more he’d begun to agree with Orik’s opinion of elves. They were best admired from a distance.

In addition to the interpersonal difficulties, there were also ongoing concerns regarding the construction of the stronghold, the acquisition of food and other provisions for the upcoming winter, and the myriad of other details that attended the governance of a large town.

Which was, in essence, what their expedition had become. A settlement, soon to be a permanent one.