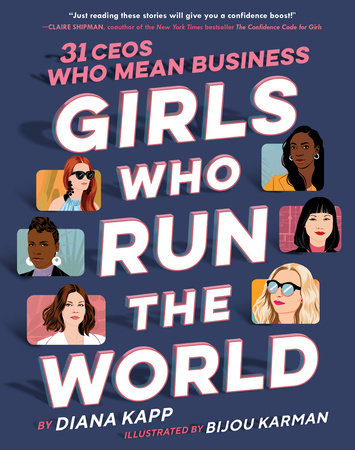 Girls Who Run the World: 31 CEOs Who Mean Business

By Diana Kapp and Bijou Karman
Part biography, part business how-to, and fully empowering, this book is the perfect gift for future entrepenuers...because you're never too young to dream BIG! With colorful portraits, fun interviews and DIY tips, Girls Who Run the World features the success stories of 31 leading ladies today of companies like Rent the Runway, PopSugar, and Soul Cycle.

Girls run biotech companies.
Girls run online fashion sites.
Girls run environmental enterprises.
They are creative. They are inventive. They mean business.
Girls run the world.
This collection gives girls of all ages the tools they need to follow their passions, turn ideas into reality and break barriers in the business world.

Girls Who Run the World: 31 CEOs Who Mean Business

By Bijou Karman
Although often neglected in history books, girls have been running things behind the scenes forever. The first solar-heated home? Developed by a woman. The daily-appreciated dishwasher? Woman. The creator of the Brooklyn Bridge? Woman again. That clever mistake-cover-upper, Liquid Paper? A woman concocted it in her kitchen blender. The list goes on: windshield wipers, the board game Monopoly, the ice cream maker, even the trusty basic brown bag. All invented by women.
But forget history—there are women out there today who most people have never heard of, breaking barriers this very second.
Back at the beginning of my career, I attended Stanford Graduate School of Business, where I went to learn about turning big ideas into companies to better our world. Sitting in those lecture halls studying the business greats, I kept wondering: Where are the women? Almost all the companies we were being taught to admire were founded by men.
When I graduated, I became a journalist in San Francisco, the beating heart of the tech revolution, covering the truly transformative ideas all around me—stem cells, virtual reality, 3-D printing, driverless cars. Again, I found myself asking: Where are the women? Sure, there are female-founded companies with name recognition, but the few out there succeeding are not visible enough. Not even close.
You may have heard the troubling stats before. There are still so few women at the top. (And it’s getting worse—in 2018 the number of female CEOs at top companies fell 25 percent from 2017!) Women in business start out equal to men in terms of jobs and pay, but the drop-off begins with the first promotion to management. And businesses founded exclusively by women snag only 2.7 percent of venture capital dollars.
These statistics are begging to be altered. And now is the moment— your moment—to defy them. Venture capitalists (VCs) are desperate to fund females—they need the missing half of our nation’s brain cells— but in order for a woman to start the next Apple or Amazon, she needs to believe it is possible. To see herself in that role.
And when girls do land businesses, guess what? Substantial research finds that they outperform the guys, which is why venture capitalists are frantic to bring women entrepreneurs into their investment portfolios. A 2013 study of privately held technology companies found those with at least one woman founder have a 35 percent higher return on investment. A 2018 Boston Consulting Group study found that companies led or co-led by women generate 10 percent more in cumulative revenue over a five-year period than those led by all-male teams. They use investment money more efficiently, too: for every dollar of funding, these start-ups generated 78 cents, while male-founded start-ups generated just 31 cents. Why wouldn’t you bet on female CEOs?
Girls Who Run the World features thirty-one women who defied the statistics and founded awesome businesses, becoming emblems of what is possible. They mastered the art of speaking up and loud, they took big risks with big money, they overreached and made mistakes, and ultimately they believed in their own brains, persisted, and hit it big.
In the pages that follow, you’ll find real trade secrets from the front lines of CEO life and insider stories that reveal what it’s really like to be a woman in business, with millions of dollars at stake.
It’s rare to gain this level of access to entrepreneurs, to see how the money and deals get made. I was lucky enough to interview twenty-eight of these thirty-one darn busy ladies, so all this comes straight from them. You will find no candy coating here, no glossing over of trip-ups. The I-wish-I-could-do-that-over moments are on full display. You will learn that there is no straight line to “making bank.” Every successful business takes a zigzag course to the top, and every start-up journey is rough, a twenty-four-hour-a-day sprint on a tightrope. Over a fire. In a lightning storm. Just maintaining confidence, let alone a balance in the bank, is a battle. The idea known as Murphy’s Law applies: whatever can go wrong, will go wrong. Competitors come out of nowhere. Delivery trucks break down. Checks bounce and employees flake. And yet, as you’ll see, all that chaos is what makes being CEO so darn satisfying. You’re in the hot seat, solving problems every hour of that daily sprint so that you can say, “I made something, and it matters. I matter.”
This book is a strong “yes, please” to moneymaking, an idea that has been pretty taboo for girls for, oh, forever. But until we matter financially, our voices won’t be heard. And until we understand money— know how much we have, how much we need, how to invest it, account for it, pay taxes on it, and feel comfortable dealing with it—we are going to finish second, behind the boys. Money is tied to power. Money is tied to everything. It just is.
So cozy up with these thirty-one hotshots, and you’ll start absorbing their can-do spirit. Their wisdom and ways will supercharge you far beyond business, too. Need a confidence boost as you power through your history report? Having trouble believing you can put together a successful election campaign for student council? Revisit the againstall-odds stories gathered here; they will inspire you to go for it, double down, recommit. After all, the tools you need to invent world-changing things are the tools you need for life: doggedness, heart, community, faith, and a candy stash for emergencies.
Girls, you are inventive and powerful. You are the sharpest tacks around. No doubt the next Apple or Amazon will come from someone who looks just like you (it might even be you). A girl is going to invent a machine that sucks all the plastic out of the oceans. Another one will mastermind a tiny pill with every critical nutrient, eliminating world hunger. One more will pioneer ___________ (fill in the blank).
So here you go, clever girl, natural-born leader. Don’t wait. Go run the world.