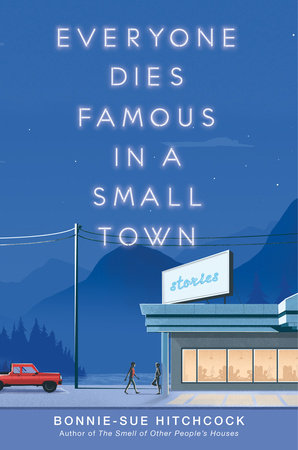 By Bonnie-Sue Hitchcock
On Sale 04.20.21
A lyrical and heartfelt collection by an award-winning writer that connects the lives of young people from small towns in Alaska and the American west. Each story is unique, yet universal.

In this book, the impact of wildfire, a wayward priest, or a mysterious disappearance ricochet across communities, threading through stories. Here, ordinary actions such as ice skating or going to church reveal hidden truths. One choice threatens a lifelong friendship. Siblings save each other. Rescue and second chances are possible, and so is revenge.

On the surface, it seems that nothing ever happens in these towns. But Bonnie-Sue Hitchcock shows that underneath that surface, teenagers' lives blaze with fury, with secrets, and with love so strong it burns a path to the future.
Read more
Read less
Read Excerpt
+ Add to My Bookshelf
+ Add to Goodreads

Gina pushed the metal snow shovel across the ice, carving a path that she and Poppy could then skate on. Well, if Poppy would quit whining and get her skates laced. Somehow Gina had gotten roped into taking her dad’s girlfriend’s kid to the pond. She’d only relented because it was minus twenty outside and Poppy had looked horrified at the idea. Her dad’s getting a new girlfriend had given Gina’s anger a whole new lease on life.

Until recently, she’d thought it had been waning, but mostly it just smoldered inside her rib cage. It was exhausting, being herself, fighting so hard all the time. She had been almost ready to just give up and let it all go. “Moving on” was what her counselor called it, and Gina wondered if she meant they should pack up and leave town, start over somewhere that did not remind Gina so much of her mother.

Instead, the girlfriend, Libby, had arrived with her cute little daughter, and poof! It was as if someone had thrown kerosene on Gina’s smoldering briquettes of anger. She could feel the flames leaping, the heat licking her sternum. On really cold days, it was almost nice.

“Sure, I’ll take Poppy over to the pond to skate,” she heard herself say. “We could even hitch Alpaca up to the sled and have him pull us over.”

Alpaca was their oldest husky—­her mother’s favorite—­and the trip would take twice as long with him. Gina smiled smugly to herself, thinking of her otter-­fur mittens that never let the cold get anywhere near her fingers. Poppy’s, she’d noticed, were down and Gore-­Tex, no comparison to animal skins.

Her dad, though, had smiled at Poppy and said, “You know, I think we have some of Gina’s mittens from when she was little that you should wear. And I’ll put the caribou hide in the sled so you stay toasty warm.” Then, to make matters worse, he’d even given her the fur hat Gina’s mother had sewed while her hands were still able to pull the needle through the stiff leather on the inside.

That was a long time ago, before the disease had attacked her mother’s joints. By the end it had kept her from even writing her name. Gina wished she could forget the image of her mom’s bent fingers gripping a stubby pencil as if her life depended on signing her name one last time. That image was all Gina had left, unless you counted a father who would move on with another woman and smile sweetly at that woman’s daughter. Maybe he thought Gina was a lost cause because she had read a book through the funeral, refusing to look at anyone or anything, especially the casket. She hadn’t known what else to do.

All she had really wanted was for someone to tell her it was okay to fall apart, but nobody did.

The disease was the reason her mom had stopped harnessing up the dogs to go to the corner store, the same one that Gina pulled into on the way to the pond while Poppy sat in the sled, talking to herself.

“What did you say?” Gina asked, stepping off the runners to tie Alpaca to the post.

“I was talking to Elizabeth.”

Gina blinked at Poppy and felt her lashes sticking together, moisture freezing them in tight crystals. She put her fur gloves over her eyes for a couple of seconds until the crystals melted and she could pry her lashes apart. But Poppy was still all alone, sitting in the sled.

She had overheard Libby telling her father about ­Poppy’s invisible friend. “We think it’s her way of coping. . . .”

But then they’d noticed Gina standing in the hallway. Libby put on a fake smile and changed the subject.

Gina refused to ask her father anything, preferring instead to ignore Libby’s appearance in her life because ignoring things was Gina’s superpower.

She really didn’t care if Poppy had invented a friend to fix whatever she needed to “cope” with. Gina had her own things to deal with and didn’t appreciate having someone else’s kid dumped in her lap. Or her dogsled.

“Whatever,” she said. “Stay here. I’m going to get a treat for Alpaca.”

Inside she walked toward the wooden wine barrel full of dog biscuits that sat in the middle of the room. Honestly, the place was nothing more than a log cabin pop-­up store that catered to locals, so dog treats were the best-­stocked item, followed by Twinkies, motor oil, herring bait in the summer, and assorted whiskeys all year round. The prices were ridiculous, though. Who needed a toothbrush bad enough to pay ten bucks for it? Her dad had carved her one out of a carrot once, telling her to make do until they could go to the bigger store in town, where things were much cheaper.

Just pushing open the door and walking inside had made Gina miss her mother so much she thought she might have to sit down. Would she ever not be overwhelmed by this place? It was one of her oldest memories, them coming here together on the sled. But it was such a long time ago she felt silly that her legs still reacted this way, going all wobbly beneath her.

Before Gina had been even Poppy’s age, her mom had stopped putting her on the caribou skin in the bed of the sled and stopped laughing at the way Gina hid her face when the poop came flying out of the dogs’ butts as they ran, her little head just at the right height for the smell to come wafting back into her nose.

Gina had loved it when the sled had swung up onto the snowbank, and she’d leaned side to side, afraid to fall out but also not, because she could hear her mom’s crisp, high laugh saying it was okay; nothing bad could happen to her while they were together.

And when they got to the store, Oliver, the owner, who had the spikiest whiskers anybody had ever seen, would give Gina a hot chocolate and she’d melt her eyelashes over the steam. Then she’d ask for an ice cream, and everyone thought that was hilarious, which made Gina feel like she’d said something clever, but she didn’t know what.

“Why, hello there,” a voice said somewhere behind her shoulder blades, knocking her back to the present and making her turn around, hoping to see Oliver smiling at her like the Ghost of Christmas Past.

But Oliver had died years ago, and this new version of him was thinner, way more clean-­shaven. And he was smiling at someone else.

Poppy had followed her inside, even though Gina had told her to wait in the sled.

“Elizabeth was cold,” Poppy said to both the man, who was already handing her hot chocolate in a Styrofoam cup, and to Gina, who looked like she wanted to throttle her.

“We aren’t staying long enough for hot drinks,” Gina said, aware that nobody was pouring cocoa for her. “And there is no Elizabeth.”

“She didn’t mean that,” said Poppy to the empty air beside her. The man smiled at the space just beyond ­Poppy’s right ear and genially played along. “Hello, Elizabeth. Would you like some cocoa too?”

Poppy giggled. “She’s a mermaid,” she told the man, blowing on her drink. “Her tail was starting to freeze outside, so I brought her in. When she warms up, she can grow legs, and then she can ice-­skate with me and Gina.”

She smiled at Gina as if they were best friends. The man seemed to find all this incredibly charming. Gina wanted to barf.

“My niece runs a summer camp down on the Peninsula,” he said. “Maybe come summer, you and Elizabeth would like to go for a week or two?”

Why would anyone pay money to be in the outdoors? Gina wondered. Then she worried that maybe she’d said it out loud.

“You could make some friends. Maybe Elizabeth would meet some other mermaids too,” he added.

“We should get going,” said Gina. “What do we owe you for the cocoa?”

He waved his hand in the air, batting her question away.

“Mermaids and lovely young ladies always drink on the house.”

Gina grabbed Poppy roughly by the shoulder and dragged her out the door. She noticed that Poppy’s right hand was determinedly clutching the air, as if Elizabeth would be left behind if she let go.

“I would appreciate it if you listened when I told you to stay put,” she hissed.

“But Elizabeth needed to thaw out her tail.”

Gina untied Alpaca as he nuzzled her hand for the treat. She turned back to see Poppy climbing into the sled and then lifting the air with both hands and setting nothing into the seat next to her. She gently wrapped the caribou hide around the empty space, whispering into the cold air so her breath looked like cartoon bubbles hovering over her head. “It’s okay. If your legs don’t grow back in time, you can keep your tail tucked under this hide and sit in the sled while we skate.”

Alpaca started to pull them forward and then sloped into a run, making Gina squint into the cold, gratefully feeling her eyes begin to tear as they picked up speed. The only thing she could appreciate about Elizabeth just then was that Alpaca was unfazed by the extra passenger.

At the pond Gina threw on her skates, grabbed the shovel, and set off to clear the ice. For all she cared, Poppy could catch up or she could just sit there and keep talking to Elizabeth about rainbow houses and cotton-­candy pillows and whatever the hell else nonsense the girl was on about.

Gina glided out onto the ice and felt the connection of the frozen water beneath her metal blades. She’d been skating all her life, and the movement itself was a welcome escape from her overworked brain. She leaned into it with everything she had, floating across the pond’s surface as she cleared herself a path.

“Gina, my hands are frozen. I can’t get my skates on. Help!”

Goddammit. Poppy was still sitting in the sled, her stocking feet wrapped in the caribou hide.