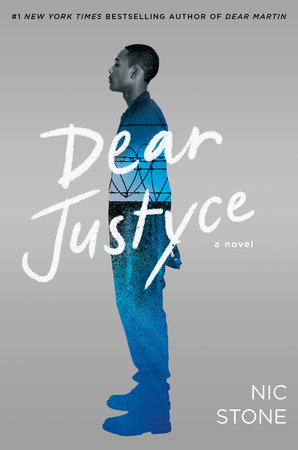 By Nic Stone On Tour
On Sale 09.29.20
The stunning sequel to the #1 New York Times bestseller Dear Martin. Incarcerated teen Quan writes letters to Justyce about his experiences in the American juvenile justice system. Perfect for fans of Jason Reynolds and Angie Thomas.

In the highly anticipated sequel to her New York Times bestseller, Nic Stone delivers an unflinching look into the flawed practices and silenced voices in the American juvenile justice system.

Vernell LaQuan Banks and Justyce McAllister grew up a block apart in the Southwest Atlanta neighborhood of Wynwood Heights. Years later, though, Justyce walks the illustrious halls of Yale University . . . and Quan sits behind bars at the Fulton Regional Youth Detention Center.

Through a series of flashbacks, vignettes, and letters to Justyce--the protagonist of Dear Martin--Quan's story takes form. Troubles at home and misunderstandings at school give rise to police encounters and tough decisions. But then there's a dead cop and a weapon with Quan's prints on it. What leads a bright kid down a road to a murder charge? Not even Quan is sure.

Read a Free Excerpt of Dear Justyce by Nic Stone 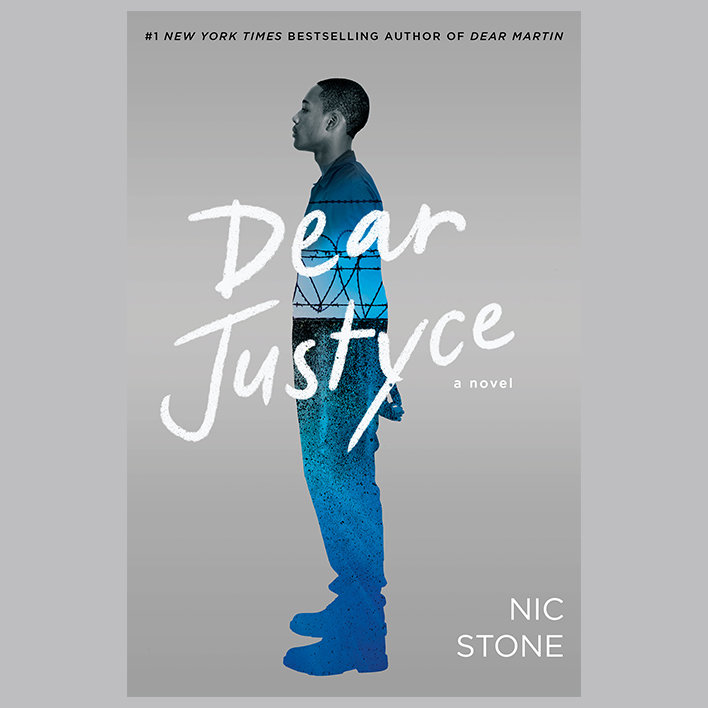 Vernell LaQuan Banks Jr. remembers the night everything changed. He’d fallen asleep on the leather sectional in Daddy’s living room while watching Lemony Snicket’s A Series of Unfortunate Events (the movie), and was dreaming about Count Olaf--who’d gotten a tan, it seemed, and looked suspiciously like his mama’s “boyfriend,” Dwight--falling into a pit of giant yellow snakes like the one from Montgomery Montgomery’s reptile room. Screaming bloody murder as he got sucked down into the scaly, slithery quicksand.

Quan’s pretty sure he was smiling in his sleep.

But then there was a BOOM that startled him so bad, he jolted awake and fell to the floor.

Which wound up being a good thing.

Next thing Quan knew, more police officers than he could count were pouring into the house with guns drawn.

He stayed down. Hidden.

Wouldn’t’ve been able to get up if he tried, he was so scared.

There was a commotion over his head--Daddy’s room.

Get down! Put your hands in the air--

Oww, man! Not so tight, you tryna break my arm?

Was the ceiling gonna fall?

Then the tumult shifted to the left. He heard Daddy’s door bang against the wall, then what sounded like eight tons of giant bricks tumbling down the stairs.

There was a sharp pain in Quan’s shoulder as his arm was suddenly wrenched in a direction he was sure it wasn’t supposed to go. A thick arm wrapped around his midsection so tight it squeezed all the air out of him . . . or maybe it all flew out because of the speed with which his body left the ground.

He couldn’t even scream. Looking back, that was the scariest part. That his voice was gone. That he couldn’t cry out. That he’d lost all control of his body and surroundings and couldn’t even make a sound to let the world know he wasn’t feelin’ it.

It’s how he feels now as he jolts awake in his cell at the Fulton Regional Youth Detention Center, unable to breathe.

Quan tries to inhale. And can’t. It’s like that cop’s still got him wrapped up and is squeezing too tight. No space for his lungs to expand.

The darkness is so thick, he feels like he’s drowning in it. Maybe he is. Maybe Quan can’t draw breath because the darkness has solidified. Turned viscous, dense and sticky and heavy. That would also explain why he can’t lift his arms or swing his legs over the edge of this cotton-lined cardboard excuse for a “bed” that makes his neck and back hurt night after night.

What Quan wouldn’t give to be back in his queen-sized, memory foam, personal cloud with crazy soft flannel sheets in his bedroom at Daddy’s house. If he’s going to die in a bed--because he’s certainly about to die--he wishes it could be that bed instead of this one.

He shuts his eyes and more pieces of that night fly at him:

before being shoved out the front door.

The sound of glass breaking as the unfinished cup of ginger ale Quan left on the counter toppled to the floor. His foot hit it as the officer with his dumb, muscly arm crushing Quan’s rib cage carried Quan through the kitchen like Quan was some kind of doll baby.

The sudden freezing air as Quan was whisked outside in his thin Iron Man pajamas with no shoes or jacket . . . and the subsequent strange warmth running down Quan’s legs when he saw Just. How. Many.

Barking dogs, straining against leashes. A helicopter circling overhead, its spotlight held steady on the team of men dragging Daddy toward the group of cop vehicles parked haphazardly and blocking the street.

Quan had counted six when his eyes landed on the van no less than five officers were wrestling his dad into.

Wrestling because Daddy kept trying to look back over his shoulder to see what was happening with Quan. He was shouting.

Get in the goddam van!

One of the officers brought an elbow down on the back of Daddy’s head. Quan watched as Daddy’s whole body went limp.

Two of the officers climbed into the back of the van and dragged Daddy’s body inside the way Quan had seen Daddy drag the giant bags of sand he’d bought for the sandbox he built in the backyard when Quan was younger.

They rolled Daddy to his back, and one of the officers knelt beside him and put two fingers up under his jaw. He nodded at the other officer, who then hopped down from the back of the van and shut the doors.

The taillights of the van glowed red and Quan wished everything would STOP. He was sobbing and twisting, and the officer holding him squeezed tighter and locked Quan’s arms down.

Better yet, Mama would bring Dwight-the-black-Olaf, and she’d toss him in the back of the van in Daddy’s place. And they’d lock him up in a snake-filled cell and throw away the key.

Quan screamed until all the scream was outta him. Then he inhaled. And he screamed some more.

His own voice was all he could hear until--

“Hey! You put that young man down! Have you lost your ever-lovin’ mind?!”

Then the officer holding him was saying

Ma’am, you are assaulting a police officer--

The grip on Quan’s body loosened. His feet touched down on the porch floor just as a wrinkled hand wrapped around his biceps and a thin arm wrapped around his lower back, a sheet of paper in hand. “You come on here with me, Junior,” a familiar voice said.

Ma’am, he can’t go with you. Until further notice, he’s a ward of the state--

“Like hell he is! You can call his mama to come get him, but until she arrives, he’ll be staying at my house.” The woman shoved the paper into the officer’s face. “You see this? This is a legally binding document. Read it aloud.”

(The officer cut his eyes at Quan before beginning. Then sighed.)

But that was all Quan needed to hear. (Did Daddy know he would be snatched away from his son in the dead of night?)

“Come on, honey,” she said, and as she ushered Quan away from the tornado of blue--lights, cars, uniforms, eyes--that’d ripped through everything he knew as normal, everything clicked into place.

Mrs. Pavlostathis. The fireball old lady who lived next door to Daddy.

“Let’s head inside and I’ll go over to your dad’s to grab you some fresh clothes so you can get cleaned up. How dare those so-called officers treat you that way. The nerve of those whites--”

She trailed off. Or at least Quan thinks she did. He can’t remember her saying anything else. He does remember thinking that under different circumstances, that last statement would’ve made him smile. He’d known Mrs. Pavlostathis since he was seven years old--she was close to eighty and used to babysit him when Daddy had to make “emergency runs” on weekends Quan was there. Despite her skin tone, Mrs. P let everyone know she was Greek, not white.

She was also one of Daddy’s clients (“A little ganja’s good for my glaucoma, Junior”) and, Quan had noticed over the years, the only neighbor who didn’t look at him funny--or avoid looking at all--when Quan would play outside or when he and Daddy would drive through the neighborhood in Daddy’s BMW.

It was something Mama always grumbled about when she’d drive the forty minutes out into the burbs to drop Quan off. I don’t know why your daddy wants to live way out here with all these white folks. They’re gonna call the cops on his ass one day, and it’ll be over. . . .

As he and Mrs. P made their way over to her house, Quan wondered if her prediction was coming true.

And in that moment: he hated his mama.

For saying that. Wishing the worst on Daddy.

For staying with duck-ass Dwight. Putting up with his antics.

For working so much.

For not being there.

“I’ll run ya a salt bath,” Mrs. P said as they stepped into her house, and fragrant warmth wrapped around him like a hug from a fluffy incense stick with arms. “I know you’re not a little kid anymore, but it’ll do ya some good. I just made some dolmas, and there’s some of those olives you like, the ones with the creamy feta inside, in the fridge. Put something in your belly. I’m sure you’re starving.”

In truth, food was the furthest thing from Quan’s mind . . . but one didn’t say no to Mrs. P. So he did as he was told. He stuffed himself with Mrs. P’s world-famous (if you let her tell it) dolmas--a blend of creamy lemon-ish rice and ground lamb rolled up into a grape leaf. He ate his weight in giant feta-filled olives.

And when the salt bath was ready, he stripped down and climbed into the fancy claw-foot tub in Mrs. P’s guest bathroom.

Swirling police lights and Daddy’s collapsing body flashed behind them.

Would Daddy go to prison?

What would happen now?

Quan wasn’t sure he wanted to find out.

It was easy at first, holding his breath and letting the water envelop him completely. Even felt nice.

But then his lungs started to burn. Images of Dasia and Gabe popped into his head. He remembered telling Gabe he’d teach him how to play Uno when he got back from Daddy’s house this time. Little dude was four now and ready to learn.

Dasia would be waiting for Quan to polish her toenails purple. That was the prize he’d promised her if she aced her spelling test. And she did.

His chest felt on the verge of bursting, and everything in his head was turning white.

Air came out of Quan’s nose with so much force, he’d swear it shot him up out of the water. As his senses returned to normal, he heard water hit tile and the bathroom at Mrs. P’s house swam back into focus.

He took a breath.

Well, more like a breath took him. He gasped as air flooded his lungs, shoving him back from the brink of No Return.

It’s the same type of breath that’s overtaking him now.

And as oxygen--a little stale from the cinder block walls and laced with the tang of iron--surges down his throat and kicks the invisible weight off him, Quan knows:

He won’t die now just like he didn’t die then.