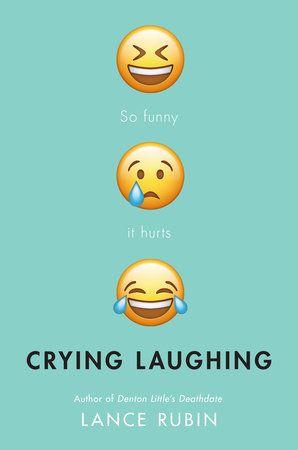 By Lance Rubin
A tragicomic story of bad dates, bad news, bad performances, and one girl's determination to find the funny in high school from the author of Denton Little's Deathdate.

Winnie Friedman has been waiting for the world to catch on to what she already knows: she's hilarious.

It might be a long wait, though. After bombing a stand-up set at her own bat mitzvah, Winnie has kept her jokes to herself. Well, to herself and her dad, a former comedian and her inspiration.

Then, on the second day of tenth grade, the funniest guy in school actually laughs at a comment she makes in the lunch line and asks her to join the improv troupe. Maybe he's even . . . flirting?

Just when Winnie's ready to say yes to comedy again, her father reveals that he's been diagnosed with ALS. That is . . . not funny. Her dad's still making jokes, though, which feels like a good thing. And Winnie's prepared to be his straight man if that's what he wants. But is it what he needs?

Caught up in a spiral of epically bad dates, bad news, and bad performances, Winnie's struggling to see the humor in it all. But finding a way to laugh is exactly what will see her through.

No one knows how funny I am.

Well, that’s not entirely true. My dad, and sometimes my mom, and my best friends, Leili and Azadeh, know.

But no one else.

Definitely no one in school, where successful humor tends to involve farts.

I’m not knocking fart humor, but I recognize it is but one color in the comedy rainbow. For many people at my school, however, it is one of just three primary comedy colors, the other two being sex humor (e.g., pretend-­humping in the hallway) and mean humor (e.g., pulling away someone’s chair as they sit down), which isn’t even humor so much as an excuse to be an asshole.

Anyway, if a joke falls in the forest and no one’s there to hear it, it does not make a sound, so sometime in the middle of last year, I stopped saying my funny thoughts aloud. It’s like giving your finest, most expensive jewelry to your hamster. Guess what? That hamster does not give a flying eff about carats.

(He might, however, care a great deal about carrots.)

(I’m sorry. I am aware puns are, in many ways, no better than fart jokes, but there’s a long tradition of really smart comedy writers appreciating puns in a manner that is half ironic, half sincere—­and that is the way I appreciate them.)

So, yeah, when it comes to my sense of humor, most of the people in school are hamsters, which is why it’s incredibly surprising that just now, on the second day of my sophomore year, I seem to have made Evan Miller laugh.

“Ha, that’s hilarious,” he says, standing next to me, our lunch trays balanced on the metal rack of the cafeteria line, as his less sophisticated friend Tim Stabisch looks on like Wait, seriously? Was it?

I should mention: Evan Miller is, by many accounts (not mine), the funniest guy in school. He’s a junior, and though our interactions have been minimal, I’ve had quite a bit of time to become familiar with his comedic stylings, as I assistant-­directed last year’s production of Arsenic and Old Lace, in which Evan played the brother who believes he’s Teddy Roosevelt and is always maniacally charging up the stairs of the house. And yes, Evan was truly hilarious in that play, mainly because he was so confident and committed to the role. As my dad has said, “The secret to being successful in comedy is confidence. That’s, like, ninety percent of it right there.” And Evan Miller has that, so I understand why his comedic reputation has soared.

Now, does he possess the other ten percent of the formula, which includes having a smart, interesting perspective on the world around him? Not so much.

Though it’s possible I’ve underestimated him, because he did just laugh at the thing I said moments ago (which was not a pun or a fart joke). I was standing in the lunch line by myself when this happened:

EVAN (next to me in line the whole time, though I hadn’t acknowledged him because I assumed he had no idea who I was): Hey, you worked on the play last year, right?

ME: Right! Evan, yeah. You were really funny in the play. (I felt bad that I’d pretended not to know his name, which is why I gave him a compliment.)

EVAN (perking up again): Oh, thanks! (Inexplicably going into stereotypical California girl voice) That’s, like, totally cool of you to say.

PEARL THE LUNCH LADY (to me): Chicken or vegetable?

(PEARL slops stir-­fry onto my tray.)

ME: Thanks. (Looking to Evan) She and I go way back, that’s why she hooks me up with the good stuff.

And there you have it. Evan is laughing at something I said. I don’t even know why I said it.

Tim, trying his best to keep up, asks, “Wait, did she just give you extra chicken?”

“Yes,” I say, even though she obviously gave me the same amount she gives everyone. “But don’t feel bad, that’s only because we were platoon mates in Vietnam. I saved her life. Twice.”

Evan laughs harder, and Tim is more confused. “I want extra chicken too,” he says. “They never give enough.”

This catches me off guard. I mean, he’s right—­I saw the improv troupe perform a couple of times last year and they could probably use my help—­but it’s a foreign and delightful feeling to have someone who isn’t me recognize that. Unfortunately, I retired from performing two and a half years ago after a traumatic incident at my bat mitzvah. Nevertheless, I’m flattered.

“First meeting of the year is tomorrow. After school.”

Pearl, back from replacing an empty serving dish, asks Evan, “Chicken or vegetable?” He opts for vegetable, which surprises me, then turns back to me as I’m grabbing a rice pudding and walking away. “Seriously, think about it. You’ll have even more fun than you did in Nam!”

Evan cracks up harder, and I try to hide my smile.

Maybe I should join Improv Troupe.