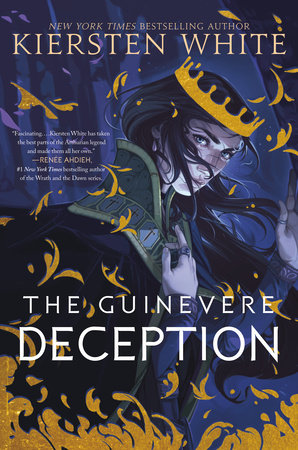 By Kiersten White On Tour
"Fascinating. . . . Kiersten White has taken the best parts of the Arthurian legend and made them all her own."--Renée Ahdieh, #1 New York Times bestselling author of The Wrath and the Dawn series.

A new fantasy series set in the world of Camelot that bestselling author Christina Lauren calls "brilliant," reimagining the Arthurian legend . . . where nothing is as magical and terrifying as a girl.

Princess Guinevere has come to Camelot to wed a stranger: the charismatic King Arthur. With magic clawing at the kingdom's borders, the great wizard Merlin conjured a solution--send in Guinevere to be Arthur's wife . . . and his protector from those who want to see the young king's idyllic city fail. The catch? Guinevere's real name--and her true identity--is a secret. She is a changeling, a girl who has given up everything to protect Camelot.

To keep Arthur safe, Guinevere must navigate a court in which the old--including Arthur's own family--demand things continue as they have been, and the new--those drawn by the dream of Camelot--fight for a better way to live. And always, in the green hearts of forests and the black depths of lakes, magic lies in wait to reclaim the land.

Deadly jousts, duplicitous knights, and forbidden romances are nothing compared to the greatest threat of all: the girl with the long black hair, riding on horseback through the dark woods toward Arthur. Because when your whole existence is a lie, how can you trust even yourself? *THE FIRST BOOK IN THE CAMELOT RISING TRILOGY*

Quiz: Which Member of King Arthur's Round Table Are You?

By Kiersten White
There was nothing in the world as magical and terrifying as a girl on the cusp of womanhood.

This particular girl had never before felt the power she held by existing in a space of men, but today, surrounded by them, it radiated from her. I am untouchable. They revolved around her as though she were the Earth, and they the adoring but distant sun and moon and stars. It was a type of magic in and of itself.

A veil obscured and dimmed the world around her. She sat back-achingly straight in her saddle. She did not wriggle her toes in the boots they were so unaccustomed to. She pretended she was a painting.

“I cannot believe the convent had no nuns willing to travel with you,” Brangien complained, brushing at the fine layer of dust that baptized their journey. Then, as though unaware she had spoken aloud, she bowed her head. “But of course I am very pleased and honored to be here.”

The smile offered in response to Brangien’s apology went unacknowledged. “Of course,” the girl said, but the words were not quite right. She could do better. She had to. “I do not love travel, either, and I appreciate the kindness you have shown by being my companion on this long journey. It would be lonely without you.” They were surrounded by people, but to them, the blue-and-scarlet-wrapped girl was goods to be guarded and safely delivered to the new owner. She hoped desperately that Brangien, eighteen years to her own sixteen, would become a friend.

She would need one. She had never had one.

But it would also complicate things. She had so many precious hidden things. Having another woman with her at all times was both unfamiliar and dangerous. Brangien’s eyes were black like her hair and hinted at cleverness. Hopefully those eyes would see only what was offered them. Brangien caught her staring and offered a tentative smile.

Focused on her companion, the girl did not notice the change outright. A subtle shift, a lessening of tension, her first breath fully drawn in two weeks. She tipped her head back and closed her eyes, grateful for the leafy green reprieve from the sun. A forest. If she were not barred on all sides by men and horses, she would hug the trees. Run her fingers along their veins to learn each tree’s story.

“Tighten the circle!” Sir Bors commanded. Under the heavy arch of branches, his shout was hushed. He was a man unaccustomed to being muted. Even his mustache bristled at the offense. He moved his reins into his teeth to grip them and drew his sword with his good arm.

The girl snapped out of her daydream to see that the horses had caught the fear of the men. They shifted and stamped, eyes rolling to search as their riders did. A gust of wind lifted her veil. She met the gaze of one of the men--Mordred, three years older than she, and soon to be her nephew. His subtle mouth had twisted up at one corner as though he was amused. Had he caught her reverie before she realized she should not be pleased by the forest?

“What is it?” she asked, turning quickly away from Mordred, who was paying far too much attention. Be a painting.

Brangien shivered and shrank into her cloak. “The trees.”

They crowded in on either side of the road, twisting trunks and grasping roots. Their branches laced overhead to form a tunnel. The girl did not understand the threat. No crack of a twig, no rustling. Nothing disturbed the beauty of the forest. Except her and the men around her. “What about the trees?” she asked.

Mordred answered. His face was serious, but there was a songlike quality to his voice. Playful and low. “They were not here on our journey to retrieve you.”

Sword still drawn, Sir Bors clicked his tongue and his horse moved forward again. The men clustered around her and Brangien. The peace and relief the girl felt at being among trees again disappeared, soured by their fear. These men claimed every space they went into.

“What does he mean, the trees were not here?” she whispered to Brangien.

Brangien had been mouthing something. She leaned over to adjust the girl’s veil and answered in a whisper as well, as though afraid the trees were listening. “Four days ago, when we passed through this area--there was no forest. All this land had been cleared. It was farms.”

“Perhaps we took a different route without realizing it?”

Brangien shook her head, her face a blur of dark eyebrows and red lips. “There was a jumble of boulders an hour back. Like a giant had been playing a child’s game and left his toys behind. I remember it very clearly. This is the same road.” A leaf drifted down from the trees, landing as lightly as a prayer on Brangien’s shoulder. Brangien squeaked with fear.

It was a simple matter to reach out and pluck the leaf from Brangien’s shoulder. The girl wanted to lift it to her face, to study the story in its lines. But, touching it, she instantly sensed that it had teeth. She dropped it to the forest floor. She even checked her fingers for blood, but of course there was none.

Brangien shuddered. “There is a village not far. We can hide there.”

“Hide?” They were a day from their destination. She wanted this to be over with. Everything to be done and settled. The idea of huddling with these men in a village while they waited to--what, fight a forest?--made her want to tear off her shoes, her veil, to beg the trees for safe passage. But the trees would not understand.

They were on opposite sides now, after all.

I am sorry, she thought, knowing the trees could not hear her. Wishing she could explain.

Brangien cried out again, putting her hands over her mouth in horror. The men around them stopped abruptly. They were still surrounded by green, everything filtered and unclear through the veil. Shapes loomed out of the forest, enormous boulders covered in moss and trailing vines.

Modesty be damned. She tore off her veil. The world came into startling, perfect focus.

The shapes were not boulders. They were homes. Cottages much like ones they had passed before, made of lime-washed cobs and beams with thatched roofs sloping down to the ground. But where smoke should have been drifting up from the roofs, there were flowers. In place of doors, trailing curtains of vines. It was a village reclaimed by nature. If she had to guess, she would say it had been abandoned generations ago.

“There was a child,” Brangien whispered through her fingers. “He sold me bread weighted with stones. I was so cross with him.”

“Where are the people?” Sir Bors asked.

“We must not linger here.” Mordred veered his horse toward hers. “Surround the princess! Quickly!”

As she was carried by the momentum of her guards, she saw one last vine-covered boulder, or perhaps a tree stump. Just the right size and shape for a little boy, offering bad bread.