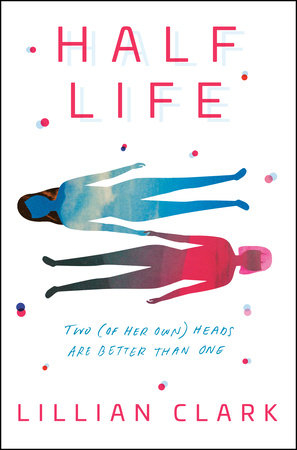 By Lillian Clark On Tour
An overachiever enrolls in an experimental clone study to prove that two (of her own) heads are better than one in this fast-paced, near-future adventure that's Black Mirror meets Becky Albertalli.

There aren't enough hours in the day for Lucille--perfectionist, overachiever--to do everything she has to do, and there certainly aren't enough hours to hang out with friends, fall in love, get in trouble--all the teenage things she knows she should want to be doing instead of preparing for a flawless future. So when she sees an ad for Life2: Do more. Be more, she's intrigued.

The company is looking for beta testers to enroll in an experimental clone program, and in the aftermath of a series of disappointments, Lucille is feeling reckless enough to jump in. At first, it's perfect: her clone, Lucy, is exactly what she needed to make her life manageable and have time for a social life. But it doesn't take long for Lucy to become more Lucy and less Lucille, and Lucille is forced to stop looking at Lucy as a reflection and start seeing her as a window--a glimpse at someone else living her own life, but better. Lucy does what she really wants to, not what she thinks she should want to, and Lucille is left wondering how much she was even a part of the perfect life she'd constructed for herself. Lucille wanted Lucy to help her relationships with everyone else, but how can she do that without first rectifying her relationship with herself?


"Like a PG-13 mash-up of Booksmart and Black Mirror, Clark’s sophomore novel delivers both twisty sci-fi suspense and a highly relatable account of the search for self-determination and self-worth."--Booklist

"Clark makes this territory fresh, and teens questioning their own self-worth will be drawn to this novel. A novel that is near-future enough to appeal to sci-fi fans as well as general audiences who like to ask, 'What if?'"--SLJ
Read more
Read less
Read Excerpt
+ Add to My Bookshelf
+ Add to Goodreads

Are You Secretly a Clone?