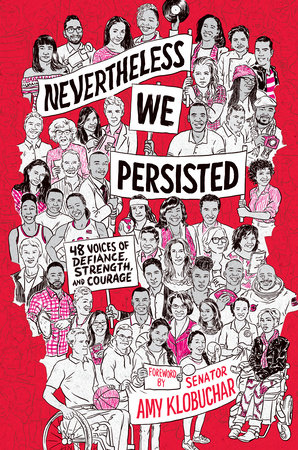 By Amy Klobuchar and In This Together Media
A powerful collection of essays from actors, activists, athletes, politicians, musicians, writers, and teens, including Senator Amy Klobuchar, actress Alia Shawkat, actor Maulik Pancholy, poet Azure Antoinette, teen activist Gavin Grimm, and many, many others, each writing about a time in their youth when they were held back because of their race, gender, or sexual identity—but persisted.

"Aren't you a terrorist?" "There are no roles for people who look like you." "That's a sin." "No girls allowed." They've heard it all. Actress Alia Shawkat reflects on all the parts she was told she was too "ethnic" to play. Former NFL player Wade Davis recalls his bullying of gay classmates in an attempt to hide his own sexuality. Teen Gavin Grimm shares the story that led to one of the infamous "bathroom bills," and how he's fighting it. Holocaust survivor Fanny Starr tells of her harrowing time in Aushwitz, where she watched her family disappear, one by one.

What made them rise up through the hate? What made them overcome the obstacles of their childhood to achieve extraordinary success? How did they break out of society's limited view of who they are and find their way to the beautiful and hard-won lives they live today? With a foreword by Minnesota senator and up-and-coming Democratic party leader Amy Klobuchar, these essays share deeply personal stories of resilience, faith, love, and, yes, persistence.

"Each tale is a soulful testament to the endurance of the human spirit and reminds readers that they are not alone in their search for self. . . . An unflinchingly honest book that should be required reading for every young person in America." —Kirkus Reviews, starred review

"[A] gem of a book. . . . There's a lot to study here and talk about on the way to becoming kinder, more empathetic, and most important, compassionate." —Booklist

"Readers encountering injustice in their own lives may be compelled to take heart—and even action." —Publishers Weekly

"A powerful collection of voices." —SLJ

"The sheer variation in writing styles, subject-matters, and structure to these narratives provides readers with inspiration in assorted forms and a complex interpretation of what it means to persist." —The Bulletin
Read more
Read less
Read Excerpt
+ Add to My Bookshelf
+ Add to Goodreads

Somewhere Over the Rainbow

In 1974, a gay man named Gilbert Baker met the prominent gay rights leader Harvey Milk, who, four years later, would be assassinated just months after becoming one of the first openly gay people ever elected to public office in the United States. Milk challenged the gifted sewer, to come up with a symbol for gay pride. And so Gilbert Baker designed the rainbow pride flag.

The rainbow flag has been the international symbol of gay pride ever since, and when I was in college in the late 1990s, I owned every decorative rainbow flag item imaginable. I went to college at the George Washington University in Washington, DC, only a few hours away from my hometown of Allentown, Pennsylvania, but light-years away culturally. Allentown had one small gay bar with blacked-out windows. Washington had a whole gayborhood, with bars and restaurants and coffee shops. And stores. Where I bought all the rainbow stuff. I had earrings and necklaces and T-shirts and socks and shoelaces and you name it. All of which I often wore at the same time. I wanted the entire world to know that I was gay--very gay--and proud of it.

My parents were always supportive, from the moment I came out of the closet in high school to every month during college when, thankfully, they paid the bill for the credit card that paid for all the rainbow stuff. They also helped pay for flights to visit my high school girlfriend, who was in college in Massachusetts and whose parents had openly disapproved of us both when they found out about our relationship. So I had this strange mix: my own parents being intensely loving and supportive, my girlfriend and I sneaking around behind her parents’ backs. Still, many kids had it way worse, and even my girlfriend’s parents eventually begrudgingly accepted us--though years later, when we were living together, they would visit and literally not talk to me, so that was weird. But like I said, others had it worse.

Which is to say, other than my girlfriend’s resentful parents, I’d never really dealt with anything I felt to be homophobia. Despite the larger climate of homophobia in America in the 1980s and 1990s, I had a gay-friendly family. I went to a pretty gay-friendly high school where there were other openly gay kids and couples. And then I went to a gay-friendly college in a gay-friendly city where, every Halloween, drag queens raced in high heels down the main street in the gayborhood. I was living a charmed, pride-flag-laden gay life.

Or that’s how I remember it, anyway. Reality was a bit more complicated. I felt that my girlfriend’s parents really hated me and my existence, and certainly our relationship, and they were a constant source of strain. And all around me there was a growing reactionary right-wing movement and a rising cultural backlash against the sorts of acceptance and progress I felt in other parts of my life. And then there was one afternoon during my freshman year, when I came home from class to find that someone had written a homophobic epithet on the message board on my dorm room door. I actually don’t remember what it was. I think it was faggot, but I really don’t remember. And that’s the point. At the time, I was devastated, furious, shattered. I thought I’d come to this gay mecca, far away from my girlfriend’s hateful parents and the anguish they caused me, surrounded by cool, cosmopolitan kids who all were down with the gay thing. And then someone pierced my bubble with a single word scrawled on my door. I remember calling my girlfriend and crying, and that there was a dorm meeting to address it. I remember how insecure it made me feel, like the sense of support I felt could disappear at any moment. And all that would leave me with was my still-insecure, searching, grasping little self--not really knowing who I was or how to be proud of myself on my own, decorating with pride to disguise my own internal discomfort. Which at that age wasn’t about being gay, or just about being gay, but about everything. I remember all those feelings, the fear and sadness. But I can’t for the life of me remember what actual word it was that hateful person wrote on my door.

Because it all feels a million miles away now. The epithet. The girlfriend’s parents. The rainbow flags. I actually see pride earrings in stores now and have to stifle some sort of gag reflex, not only sartorial but political--because I can’t believe I ever wore a necklace made out of metal rainbow links, or felt that I had to. I’m not less gay now, not at all. Maybe even the contrary, now that I’m a public figure and a very publicly gay one at that. But my fledgling sense of my identity--my definition of myself in the face of hostility and thus my desire to clad myself in a sort of armor of pride--feels so sad to me now. Back then, I too often let others define me--including those who didn’t approve of my life or my choices. The hate from my girlfriend’s parents and that person who wrote on my door encircled me, imprisoned me, had way more power over my consciousness and sense of self than I could admit. I put on the gay pride paraphernalia on the outside because I couldn’t always muster what I needed on the inside. Pride was something to buy because it wasn’t something I had.

And yet, just twenty years later, I can’t precisely remember what that hateful word was that was scrawled on my dorm room door. Half my life later and I’m now called way worse words on a pretty much daily basis, and I couldn’t care less. My sense of self is strong and only growing. I have a partner--whom I met after college and whose parents are loving and supportive--and together we have a daughter and a dog and a community of friends, all of whom are as accepting and loving as I ever could have hoped for. And yet even then it doesn’t matter as much--because I love and accept myself more than my teenage self ever could have dreamed, not just the gay parts but all the parts, the parts I thought were rough and weird and unfortunate and now appreciate as what makes me uniquely, wonderfully me. I don’t remember what that person wrote on my door all those years ago because I don’t care anymore. Their hate doesn’t define me. I define myself.

After a spate of suicides by teens a few years ago, gay, lesbian, bisexual, and transgender adults started sharing messages that It Gets Better. And I remember thinking: It all gets better. Not just being gay. Everything. Every second that I’m alive, I become more comfortable in my own skin, more okay with my own faults and foibles, more enthusiastic about my gifts and ambitions. And more genuinely proud, not because I bought pride at a store to put on myself, but from something I found within. Eventually. With time.

I wish I could go back and tell my younger self that it would all be okay, that the problems that seemed so big then would eventually fade to the point of forgetting--that instead of swallowing and internalizing hate and anger, I would grow strong enough to fight them. And yet, in my way, I did persist even then. I stayed with that girlfriend for several years after high school--in spite of, or perhaps because of, her parents’ hate. And I wore that damn gay pride paraphernalia like I was a float in my own parade, defying the world around me with every bead and thread. And that resistance was beautiful and brave in its own way--even if it was tacky.

Sally Kohn is a CNN political commentator and columnist.