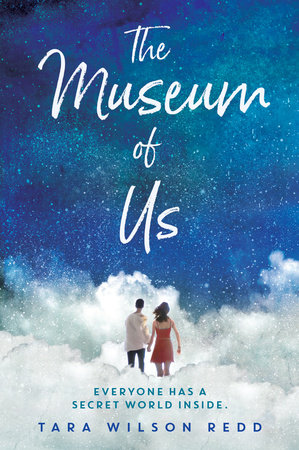 The Museum of Us

By Tara Wilson Redd
An intoxicating debut novel that will leave you questioning what is real and why we escape into fantasy, perfect for fans of Belzhar by Meg Wolitzer and Falling into Place by Amy Zhang.

Secrets are con artists: they trick you into letting them out.

Sadie loves her rocker boyfriend Henry and her running partner and best friend Lucie, but no one can measure up to her truest love and hero, the dazzling and passionate George. George, her secret.

When something goes wrong and Sadie is taken to the hospital calling out for George, her hidden life may be exposed. Now she must confront the truth of the past, and protect a world she is terrified to lose.

"A teen learns to use her rich interior world to fight trauma, but is this the only way out? This honest, heartfelt tale is deep and mysterious as imagination itself." --Judy Blundell, author of What I Saw and How I Lied and Strings Attached

"You'll inhale as you skid into the first chapter and only exhale as you cling to the last. A beautiful book about longing and loss . . . and what is real." --Teresa Toten, author of The Hero of Room 13B, winner of the Governor General Award, and Beware That Girl
Read more
Read less
Read Excerpt
+ Add to My Bookshelf
+ Add to Goodreads

The Museum of Us

George’s blue eyes captured her. They were dark as the deep blue sea and Sadie was adrift under a starless night. No going back now.

Sadie turned the ignition key and revved her truck, Old Charlotte, to life. The air-conditioning raised goose bumps on her skin. It was one hundred degrees outside but she was cold. She checked her phone one last time: two texts--one from Lucie and one from Henry--and a voice mail from her parents. George rustled the maps in his lap and raised an eyebrow at her, so she tossed her phone into the glove compartment. George grabbed her wrist and kissed the palm of her hand, closing the glove box with the toe of his impeccably shined shoe.

It had taken her three tries, private lessons, and eight months to get her license. Being behind the wheel was still strange and exciting and scary.

She glanced at his maps. The whole pile was marked with red Sharpie. “Anyone with a true sense of adventure knows how to read a map. You have to imagine the world that goes with it,” George had told her. “GPS is the death of imagination.” So they’d spent last night lying side by side on the filthy basement rug dreaming up interesting destinations. They’d lost themselves in more exotic fantasies in Sadie’s many purloined atlases--Rio, Morocco, and always, always Moscow--but they weren’t going to be driving to Russia in a beat‑up Ford F100, no matter how beautifully her parents had restored their truck, dear Old Charlotte.

The limits of reality turned dreams back into paper maps. Even with a car, you couldn’t really escape. Mapped out, the landmarks of Sadie’s life made such a small circle: her parents’ repair shop, Henry’s house, the library, school. She would be a senior in the fall, but that didn’t expand her life into unknown territory. The colleges she hoped to visit in the fall were in-state. A tiny world.

George had seen her disappointment. He’d tried to make it better. Even in St. Louis, with George there were adventures. “Let me give you one perfect day,” he had begged, and he’d drawn their adventure right there on the map. He circled destination after destination, linking them with one red line. “A bright red line toward destiny,” he had called it.

And now they were on that red line.

George slid on his Clubmasters, the dark lenses a villainous mask. He smiled and looked away, eighteen years of cultivated cool settling into a leather seat. His smile destroyed her. He didn’t have to grow up to be someone; he already was someone.

Sadie put on her Ray-Ban knockoffs. On the floor, her polka-dot backpack was filled with snacks and books and her still-shiny driver’s license. The backpack sat between George’s black shoes, his black briefcase nestled beside it, holding whatever mysteries he’d packed away with his imported cigarettes. Old Charlotte was rumbling in anticipation, but Sadie gripped the steering wheel with clammy hands, her foot on the brake, toeing the clutch.

A night of maps had seemed so far away from this plan.

George put his hand on the steering wheel over hers. “To seek and find?”

His voice washed away all doubt.

“To seek and find,” she replied, putting the truck in gear with an audible creak.

It was easy. Time slipped by them, unnoticed. The radio was broken, but it didn’t matter. George told her stories. He sang Beatles songs--at least, the parts he could remember, making up the rest. She didn’t care. Nothing could ruin this day.

As the sun climbed the sky, they settled into the comfortable silence of the oldest of friends. They split a burger and milk shake. They stopped at the art museum, the history museum, the zoo. There was a whole world in Forest Park. Back in the truck, George fell asleep as Sadie drove home under a perfect sunset, his long legs buckled under him like a contortionist. He smelled like cigarettes and bourbon and looked so much like a little boy.

I will never love anyone this much, thought Sadie, stealing glances at him as he slept. She retreated into that thought and fell into the memories of him, into their inseparable future together.

She didn’t even see the tree.

Moments passed like snapshots being thrown into the trash:

The drip of a melted pink milk shake falling sideways.

The bone sticking out of her leg.

The empty seat beside her.

Sadie was alone. The taste of blood faded and was replaced with the certainty that she was dying. She felt like she was seeing the world from the bottom of the ocean. She couldn’t hear herself screaming, though she knew she was. All she could hear was the icy note of tragedy, like the dead sound people hear after a bomb.

Then she wasn’t alone. People, strangers, were all around her. Hands were on her face, and more hands tied her down. But she needed to sit up. She needed to find him. She closed her eyes tight and when she opened them, she was in a different place. Am I dreaming, or dead? she thought in a panic. Lights went by and blinded her. Everyone was talking. She could tell they were trying to talk to her, but she couldn’t make out what they were saying.

An emergency room, she realized. She tried to get up and run, but her legs wouldn’t obey. She was trapped.