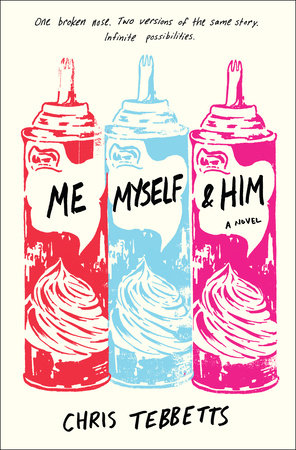 By Chris Tebbetts On Tour
Perfect for fans of Becky Albertalli's Simon vs. the Homo Sapiens Agenda and A. S. King's Still Life with Tornado, this story of parallel time lines cleverly explores how our choices can change and shape us--as well as the ways in which choices don't change the core of our being at all.

When Chris Schweitzer takes a hit of whippets and passes out face first on the cement, his nose isn't the only thing that changes forever. Instead of staying home with his friends for the last summer after high school, he's shipped off to live with his famous physicist but royal jerk of a father to prove he can "play by the rules" before Dad will pay for college.

In an alternate time line, Chris's parents remain blissfully ignorant about the accident, and life at home goes back to normal--until it doesn't. A new spark between his two best (straight) friends quickly turns Chris into a (gay) third wheel, and even worse, the truth about the whippets incident starts to unravel. As his summer explodes into a million messy pieces, Chris wonders how else things might have gone. Is it possible to be jealous of another version of yourself in an alternate reality that doesn't even exist?

With musings on fate, religion, parallel universes, and the best way to eat a cinnamon roll, Me Myself & Him examines how what we consider to be true is really just one part of the much (much) bigger picture.

"Wildly ingenious,...altogether, the novel's a winner in this and any other universe."-Booklist, Starred Review

"An engaging story that examines love, relationships, and the different paths one's life can take...[perfect] for fans of Adam Silvera and Becky Albertalli's What if It's Us, Bill Konigsberg's The Music of What Happens, and Robyn Schneider's The ­Beginning of Everything."--SLJ
Read more
Read less
Read Excerpt
+ Add to My Bookshelf
+ Add to Goodreads

The last thing I remember is sucking down a lungful of gas and closing my eyes. My friend Wexler tells me that I set down the cartridge, stood up again, paused like I wasn’t going anywhere, and then fell over, almost slow motion, like a tree going down, until I landed face-­first on the cement.

All of that’s blank in my memory.

When I woke up, if that’s what you can call it, the first thing I saw were these yellow and blue streaks, moving away from me like paint running down a windshield. On the other side of that, I saw one of Wexler’s black Keens, the ones he wore at the restaurant, but just one of them, right there in front of my face.

“Hang on, man. You’re going to be okay. I called the ambulance. It’s okay.”

It wasn’t, though. I could see the shoe, and I heard Wexler’s voice, but they weren’t, at that time, Wexler’s shoe and Wexler’s voice. They were just shoe and voice. I had no idea where I was, or how I’d gotten there, or why everything was sideways.

The first thing that kind of made sense was the sound of the siren. I knew it was an ambulance. That was good. At least I knew something.

And then there were all these people. EMTs and police. More shoes.

A cop kneeled down next to me. It was starting to come together.

He just shrugged and took his lack of grasp for the obvious somewhere else. I heard Wexler giving them my information. Then they put a big thick collar around my neck and lifted me onto a stretcher.

The back of the ambulance was like this lit portal with night all around it, and I slid right in. My face didn’t hurt. I don’t know why, it just didn’t. I thought the collar was a bit much, but someone took my hand away when I tried to loosen it.

And then we were moving.

I’d always wanted to ride in an ambulance. It was on the list with helicopter, glider, and, yes, fire truck, so I couldn’t help at least noticing that it was happening. The whole thing was so much like a movie or TV show that reality kind of got drowned out. “Riding in an ambulance” was all front and center. “I am so screwed” wouldn’t show up for another forty-­five minutes or so.

At the emergency room, they wheeled me right in. A doctor came into the bay where they had stuck me and felt around on my face. When she got to my nose, she made this sympathetic kind of sucking sound.

“What happened to you?” she said.

“Well . . .” I didn’t know how to tell her anything but the truth. “I did a hit of nitrous oxide and passed out on the cement.” My voice was really small, like if I barely said it, it would barely be true. “Does my mom have to know about that?”

“You’re eighteen,” she said, with the same kind of tone she might use to say You’re a dumbass kid in every respect but the law. “That part’s up to you.”

I’m not sure how the standard exam is supposed to go in these situations, but I’m pretty sure I got the discount package after that. She gave me another quick once-­over, said something about X-­rays, and left.

I lay there alone for a while, and the shame started to creep in, but also a dose of aggravation with myself. Why couldn’t I have just said I fell down on the cement?