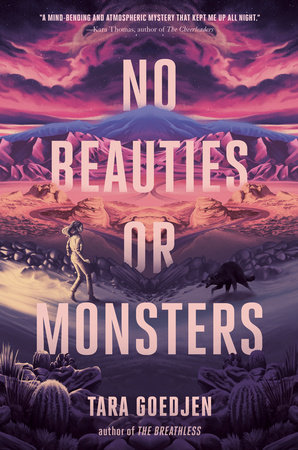 No Beauties or Monsters

By Tara Goedjen
On Sale 12.07.21
For fans of Rory Power and Stranger Things comes an all-new, hair-raising mystery about a girl whose family secrets are as threatening as the desert that surrounds her—but whose quest to expose the truth may tear apart reality itself.

Rylie hasn't been back to Twentynine Palms since her dad died. She left a lot of memories out there, buried in the sand of the Mojave Desert. Memories about her dad, her old friends Nathan and Lily, and most of all, her enigmatic grandfather, a man who cut ties with Rylie’s family before he passed away. But her mom’s new work assignment means their family has to move, and now Rylie’s in the one place she never wanted to return to, living in the house of a grandfather she barely knew.

At least her old friends are happy to welcome her home. Well, some of them, anyway. Lily is gone, vanished into the desert. And Twentynine Palms is so much stranger than Rylie remembers. There are whispers around town of a mysterious killer on the loose, but it isn’t just Twentynine Palms that feels off—there’s something wrong with Rylie, too. She’s seeing things she can’t explain. Visions of monstrous creatures that stalk the night.

Somehow, it all seems to be tied to her grandfather and the family cabin he left behind. Rylie wants the truth, but she doesn’t know if she can trust herself. Are the monsters in her head really out there? Or could it be that the deadliest thing in the desert . . . is Rylie herself?
Read more
Read less
Read Excerpt
+ Add to My Bookshelf
+ Add to Goodreads

No Beauties or Monsters

“Our turn,” Rylie says. She nudges the jeep up to the guard post. A sign’s hanging from the new razor wire fence: vehicle checkpoint, twentynine palms. The name sounds tropical, but it’s a lie--Twentynine Palms is a Marine Corps base surrounded by desert. A lot of desert.

“Here.” Rylie holds out their IDs for the guard. He scans their cards but doesn’t open the gate. Instead, he turns on a flashlight and aims it at the jeep.

“We’re with my mom, Major Caruso,” Rylie says. “In the U-Haul that just went through? She was assigned--”

“Got it.” The guard’s flashlight hits her in the face, and she blinks, her eyes burning. A second later it’s on Ben. Her stepdad’s sitting too straight in the passenger seat, his tracksuit sleeves pushed up to his elbows, his forearms flexing. Behind him, Owen’s holding down a growling Castle, their rescue terrier.

“He’ll be fine,” she whispers back. This time they’ll all be fine. She glances at the guard--he’s taking too long. “How come there’s a checkpoint here? We’re not even at the base yet.”

“Heightened security. It’s temporary.” He clicks off his flashlight. “You’re all clear.”

She wants to ask more, but it’s probably better just to keep driving. The gate swings outward, and she quickly accelerates--following her mom, just like always. Because no matter what they’re heading into, they have each other. A triangle has strength, her mom used to say. Me, you, Owen, she’d say. We’re strong. But they aren’t a triangle anymore, not with Ben and Kai, and they’re going straight into the one place Rylie never wants to see again.

“Well, that was interesting,” Ben says, clutching the door handle like she’s going too fast. His gaze flicks from the speedometer to the window. “So far the desert seems fairly . . .”

“Warm and welcoming?” It’s another lie, but maybe it’s not a lie to Ben. All he would see right now is an inky highway and a scattering of lights in the distance. No memories to go with them. Nothing to keep him awake at night, hoping there’d been some mistake. Hoping they weren’t actually going back.

“Welcoming, huh? I could use some of that,” Ben says, giving her a tired grin. “After San Diego, living out here will take some adjusting.”

“We used to come here every summer,” Owen pipes up. “So you’re the only one who’s new, Dad.”

Dad. Rylie’s heart twinges, and she tightens her grip on the wheel. It’s good that Owen’s calling him that. It’s a good sign. The wedding was only last month, but her mom met Ben a few years ago and used to joke that she wanted Owen to fall in love first.

“I’m looking forward to seeing this place in daylight,” Ben says. “You can be my tour guides. After everyone gets a sleep-in.” He attempts to hide a yawn. “All the packing really took it out of me. Thanks for driving, Rye.”

“Wouldn’t have it any other way.” Rylie feels her shoulders ease, just a little. They can do this. She can do this, for her mom, for Owen. The blended family, the move back to Twentynine Palms. There are upsides to living in the desert too. Wildflowers so blue they shame the sky. Sun-baked rock for climbing. The Joshua Tree cabin. And Nathan and Lily.

“Not much longer now,” she says, switching on the radio. The anchorwoman is loud, anxious. “. . . just outside Twentynine Palms, where earlier today, a teenager was found dead. The identity of the victim remains unknown. . . .”

Rylie stiffens. For a second she’s thirteen again and her eyes are stinging, and a too-sweet scent is in the air. She reaches over and snaps the radio off. It’s just a coincidence. She gets her breath under control: breathing out slowly, breathing in even more slowly. Ben doesn’t notice--he’s asleep now, with his head resting against the window. In the seat behind him, Owen’s playing with the voice recorder, their dad’s old Talkboy that still has life.

“It feels funny here, doesn’t it?” Owen twirls his headphones. “Do you feel it too?”

“Feel what?” Her voice catches, but she pulls herself together. “The freedom of the open road?” she jokes, but she knows what he’s really getting at. The truth is, she’s always felt off in the desert, not exactly herself. Not normal. It happened every summer vacation they spent here, every holiday visit. “All I feel is the hum of the tires, O.”

“Then you’re not paying attention,” Owen says, his face solemn, his curly brown hair in his eyes like usual. “It’s not like I can hear better than you. I just pay attention.” He’s only eight, but sometimes he seems older. “And being quiet helps.”

Rylie grins. “That your way of telling me to shut up?”

“ ‘Weeelcome baaack,’ ” Owen drawls out. Ahead of them, the U-Haul careens around a dark curve, and then the jeep’s speakers start to crackle; the radio isn’t switched off all the way. Rylie’s just reaching for the dash when there’s a blur ahead, something darting across the road. She slams the brakes, but there’s a thud and a sickening lump under the tires as the jeep jerks to a stop.

“What did we hit?” Owen whispers.

For a second she can’t find her voice, can’t unclamp her fingers from the wheel. Point A to point B. That’s all she needed to do. And now this.

She forces herself to talk. Forces a lightness into her voice. “I’ll get out to check, O.”

There’s nothing in sight except for the highway and a roadside bar that looks abandoned. She glances over at their stepdad. Ben’s somehow still asleep in the passenger seat, a peaceful look on his face. No way is she waking him up. She turns, making sure Owen’s white cane is in reach.

“Back in a minute,” she says. But now it’s getting harder to breathe--the bad feeling is spreading under her ribs. “Stay here, okay?” Then she steps outside.

Rylie rounds the front of the jeep, its headlights searing her eyes. If I hit a person . . .

But nothing’s lying in the road. There’s no blood on the metal. No fur, no hair, no snatch of cloth.

The window creaks, and Owen calls, “Everything fine?”

“Yeah. Maybe it was just a rock.” Liar. When it went under the tires, she felt how big it was. “Just stay in the car.”

She touches the hood. The metal’s wet, almost sticky, and she shoves her hand into the headlights. Her skin looks dry; it looks fine. But her fingers are still shredded from last week’s climb, and it feels like something’s seeping into the tiny cuts on her fingertips. She wipes them on her shirt and kneels down, the pavement scraping her knees as she looks under the jeep.

At first she can’t tell what she’s seeing. Something dark and shadowy is behind the front right tire. She slowly reaches out. It’s a sleeve. A black sweatshirt sleeve. Limp fingers, slightly curled.

No. Rylie yanks her hand back. Please no, please no.

She stumbles around to the other side of the jeep. Lying on the ground is a boy about her age, a hiking backpack beside him with a tire mark streaked across it. The boy’s face is turned away from her, and there’s blood on the pavement. She clamps a hand over her mouth. A wave of dizziness hits her, but she leans down to touch his neck anyway, gropes desperately for a pulse. His skin is wet. She can’t feel anything. Then the sound of a jagged breath slices the air. Hope flares in her chest, but the boy’s not moving.

The jagged breath comes again--it’s her own lungs, heaving. I did this. I did this. She stares down at him for another breath and then jerks into action, pulling her phone from her pocket with numb fingers, her hands shaking as she dials. The phone’s still ringing as she straightens fast, pounding on her stepdad’s door.

It’s not Ben calling her name; it’s her brother.

“Stay inside.” Her voice sounds too harsh to be hers. Then the phone connects.

Rylie staggers away from the jeep, away from Owen and the body on the ground. She shuts her eyes and sees a black sweatshirt sleeve, pale fingers. “There’s been an accident,” she chokes out. The weight of what she did presses down on her throat. “I hit--” A loud crackling noise drowns out the line, and she pushes the phone against her ear. “Hello?”

Nothing but silence. The line’s dead. Rylie fumbles the phone, dialing again as she turns back to the boy. And then she freezes.

She blinks. He couldn’t have gotten up without her hearing; he couldn’t have walked off. But he’s not under the car anymore. Her fists tighten as she scans the highway. Nothing. No one. Even the nearby bar looks abandoned, empty. There aren’t any lights on, and its sign is covered with huge graffiti: live on time, emit no evil. A shiver prickles down her neck. The bar’s parking lot is empty too--no cars, no people, no one. Same for the desert scrub around it.

He couldn’t have gone far. She turns back to where the boy was lying, and her stomach clenches. The blood she saw under his head--it’s not there either. No smear, no wetness.

It’s happening again. She rubs at her eyes, so hard, they burn. The road’s empty; the blood is gone.

Because it was never there in the first place.