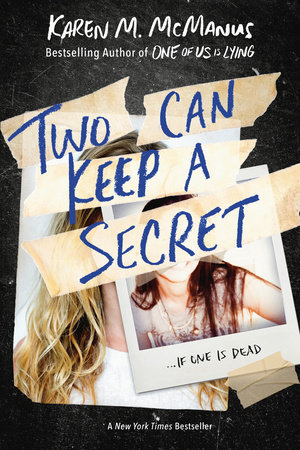 By Karen M. McManus On Tour
On Sale 05.05.20
"When it comes to YA suspense, Karen M. McManus is in a league of her own. Fresh off her best-selling breakout One of Us Is Lying . . . the author has returned with a juicy second novel. It's even better than what came before." --EW

The "must-read YA thriller" (Bustle) from #1 New York Times bestselling author of One of Us Is Lying!

Echo Ridge is small-town America. Ellery's never been there, but she's heard all about it. Her aunt went missing there at age seventeen. And only five years ago, a homecoming queen put the town on the map when she was killed. Now Ellery has to move there to live with a grandmother she barely knows.

The town is picture-perfect, but it's hiding secrets. And before school even begins for Ellery, someone has declared open season on homecoming, promising to make it as dangerous as it was five years ago. Then, almost as if to prove it, another girl goes missing.

Ellery knows all about secrets. Her mother has them; her grandmother does too. And the longer she's in Echo Ridge, the clearer it becomes that everyone there is hiding something. The thing is, secrets are dangerous--and most people aren't good at keeping them. Which is why in Echo Ridge, it's safest to keep your secrets to yourself.

"Pretty Little Liars meets The Breakfast Club....so make room for One of Us Is Lying in your bags, because this is one carry-on you won't want to put down." --EW.com

"A whodunit with a Breakfast Club twist...following four unique voices on a chase to find the killer, this one will keep you guessing until the very, very end." --Popcrush

"This is no ordinary whodunit...surprising and relevant."--USA Today
Read more
Read less
Read Excerpt
+ Add to My Bookshelf
+ Add to Goodreads

If I believed in omens, this would be a bad one.

There’s only one suitcase left on the baggage carousel. It’s bright pink, covered with Hello Kitty stickers, and definitely not mine.

My brother, Ezra, watches it pass us for the fourth time, leaning on the handle of his own oversized suitcase. The crowd around the carousel is nearly gone, except for a couple arguing about who was supposed to keep track of their rental car reservation. “Maybe you should take it,” Ezra suggests. “Seems like whoever owns it wasn’t on our flight, and I bet they have an interesting wardrobe. A lot of polka dots, probably. And glitter.” His phone chimes, and he pulls it out of his pocket. “Nana’s outside.”

“I can’t believe this,” I mutter, kicking the toe of my sneaker against the carousel’s metal side. “My entire life was in that suitcase.”

It’s a slight exaggeration. My actual entire life was in La Puente, California, until about eight hours ago. Other than a few boxes shipped to Vermont last week, the suitcase contains what’s left.

“I guess we should report it.” Ezra scans the baggage claim area, running a hand over his close-cropped hair. He used to have thick dark curls like mine, hanging in his eyes, and I still can’t get used to the cut he got over the summer. He tilts his suitcase and pivots toward the information desk. “Over here, probably.”

The skinny guy behind the desk looks like he could still be in high school, with a rash of red pimples dotting his cheeks and jawline. A gold name tag pinned crookedly to his blue vest reads “Andy.” Andy’s thin lips twist when I tell him about my suitcase, and he cranes his neck toward the Hello Kitty bag still making carousel laps. “Flight 5624 from Los Angeles? With a layover in Charlotte?” I nod. “You sure that’s not yours?”

“Bummer. It’ll turn up, though. You just gotta fill this out.” He yanks open a drawer and pulls out a form, sliding it toward me. “There’s a pen around here somewhere,” he mutters, pawing half-heartedly through a stack of papers.

“I have one.” I unzip the front of my backpack, pulling out a book that I place on the counter while I feel around for a pen. Ezra raises his brows when he sees the battered hardcover.

“Really, Ellery?” he asks. “You brought In Cold Blood on the plane? Why didn’t you just ship it with the rest of your books?”

“Whatever. It’s the thought that counts,” I mutter. Our mother bought me the “signed” first edition off eBay after she landed a role as Dead Body #2 on Law & Order four years ago. She gave Ezra a Sex Pistols album cover with a Sid Vicious autograph that was probably just as forged. We should’ve gotten a car with reliable brakes instead, but Sadie’s never been great at long-term planning. “Anyway, you know what they say. When in Murderland . . .” I finally extract a pen and start scratching my name across the form.

“You headed for Echo Ridge, then?” Andy asks. I pause on the second c of my last name and he adds, “They don’t call it that anymore, you know. And you’re early. It doesn’t open for another week.”

“I know. I didn’t mean the theme park. I meant the . . .” I trail off before saying town and shove In Cold Blood into my bag. “Never mind,” I say, returning my attention to the form. “How long does it usually take to get your stuff back?”

“Shouldn’t be more than a day.” Andy’s eyes drift between Ezra and me. “You guys look a lot alike. You twins?”

I nod and keep writing. Ezra, ever polite, answers, “We are.”

“I was supposed to be a twin,” Andy says. “The other one got absorbed in the womb, though.” Ezra lets out a surprised little snort, and I bite back a laugh. This happens to my brother all the time; people overshare the strangest things with him. We might have almost the same face, but his is the one everyone trusts. “I always thought it would’ve been cool to have a twin. You could pretend to be one another and mess with people.” I look up, and Andy is squinting at us again. “Well. I guess you guys can’t do that. You aren’t the right kind of twins.”

“Definitely not,” Ezra says with a fixed smile.

I write faster and hand the completed form to Andy, who tears off the top sheets and gives me the yellow carbon. “So somebody will get in touch, right?” I ask.

“Yep,” Andy says. “You don’t hear from them tomorrow, call the number at the bottom. Have fun in Echo Ridge.”

Ezra exhales loudly as we head for the revolving door, and I grin at him over my shoulder. “You make the nicest friends.”

He shudders. “Now I can’t stop thinking about it. Absorbed. How does that even happen? Did he . . . No. I’m not going to speculate. I don’t want to know. What a weird thing to grow up with, though, huh? Knowing how easily you could’ve been the wrong twin.”

We push through the door into a blast of stifling, exhaust-filled air that takes me by surprise. Even on the last day of August, I’d expected Vermont to be a lot cooler than California. I pull my hair off my neck while Ezra scrolls through his phone. “Nana says she’s circling because she didn’t want to park in a lot,” he reports.

I raise my brows at him. “Nana’s texting and driving?”

I haven’t seen my grandmother since she visited us in California ten years ago, but from what I can remember, that seems out of character.

We wait a few minutes, wilting in the heat, until a forest-green Subaru station wagon pulls up beside us. The passenger-side window rolls down, and Nana sticks her head out. She doesn’t look much different than she does over Skype, although her thick gray bangs appear freshly cut. “Go on, get in,” she calls, side-eyeing the traffic cop a few feet from us. “They won’t let you idle for more than a minute.” She pulls her head back in as Ezra wheels his solitary suitcase toward the trunk.

When we slide into the backseat Nana turns to face us, and so does a younger woman behind the steering wheel. “Ellery, Ezra, this is Melanie Kilduff. Her family lives down the street from us. I have terrible night vision, so Melanie was kind enough to drive. She used to babysit your mother when she was young. You’ve probably heard the name.”

Ezra and I exchange wide-eyed glances. Yes. Yes, we have.

Sadie left Echo Ridge when she was eighteen, and she’s only been back twice. The first time was the year before we were born, when our grandfather died from a heart attack. And the second time was five years ago, for Melanie’s teenage daughter’s funeral.

Ezra and I watched the Dateline special--“Mystery at Murderland”--at home while our neighbor stayed with us. I was transfixed by the story of Lacey Kilduff, the beautiful blond homecoming queen from my mother’s hometown, found strangled in a Halloween theme park. Airport Andy was right; the park’s owner changed its name from Murderland to Fright Farm a few months later. I’m not sure the case would have gotten as much national attention if the park hadn’t had such an on-the-nose name.

Or if Lacey hadn’t been the second pretty teenager from Echo Ridge--and from the same exact street, even--to make tragic headlines.

Sadie wouldn’t answer any of our questions when she got back from Lacey’s funeral. “I just want to forget about it,” she said whenever we asked. Which is what she’s been saying about Echo Ridge our entire lives.

Ironic, I guess, that we ended up here anyway.